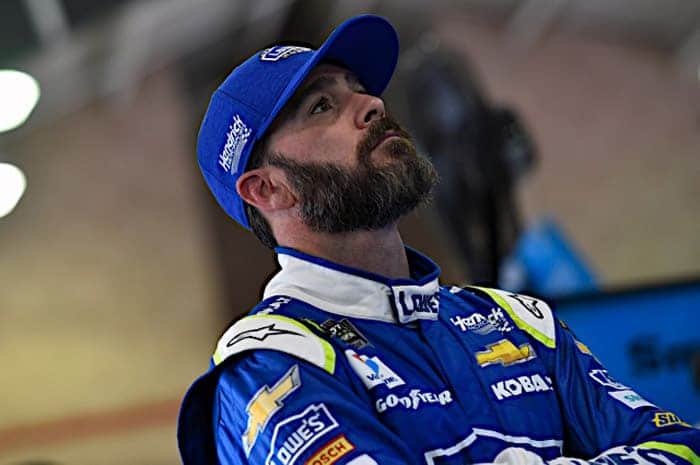 Jimmie Johnson is back.

After a tough beginning to the 2017 season in Hendrick Motorsports terms, Sunday’s O’Reilly Auto Parts 500 at Texas Motor Speedway saw a return to Victory Lane for Johnson, who earns his seventh win at the 1.5-mile track.

With only one top-10 in the opening six races, the victory punches the seven-time champion’s ticket into the playoffs.

The win didn’t come easy for Johnson, who had to start in the rear after a spin in qualifying. The No. 48 battling through the field in a mostly single-lane groove, having to pass Joey Logano with 16 laps to go before holding off Kyle Larson for the win.

Despite the difficult conditions, Johnson believes the track came in toward the final laps of the event.

“It was so tough those opening 23 laps in traffic,” Johnson said. “The air was very turbulent, the track wasn’t clean. Just the way it finished, I think we could run a race now and put on a good show. It just takes a long time for this track to age, nothing out of the ordinary.”

We saw this take place in the final laps, as Brad Keselowski and Jamie McMurray battled side-by-side for sixth spot. The outside lane in Turns 3,4 began to show speed in time for the finish.

“I had a better car than most, so I think it made it a better race for me,” Larson said. “I could really stay low off Turn 2 and pass people in traffic. I wish I could’ve gotten by Joey earlier. I would’ve had a shot at Joey.”

Larson wasn’t the most disappointed man in the Monster Energy NASCAR Cup Series garage on Sunday, however. Ryan Blaney started from outside pole in his Wood Brothers Racing No. 21 and stormed to the lead in the opening laps. The 23-year-old was the man to beat, leading a race-high 148 laps.

The run soon took a hit after sweeping both stage wins, as he lost track position on a Lap 171 pitstop, never recovering. He finished 12th.

Finishing third was Logano followed by pole-sitter Kevin Harvick and Dale Earnhardt Jr., who earns his first top-five finish since June of 2016 in fifth.

Didn’t watch. The Masters was on. And watched Hinch win.

Saw where Danica qualified faster than Johnson. Oops! Not good for someone who considers himself the greatest driver ever.

Didn’t watch either, but I heard Blaney put on a great show! Too bad he didn’t get the checkers. Jimmie Johnson what a nap inducer…Yawn.