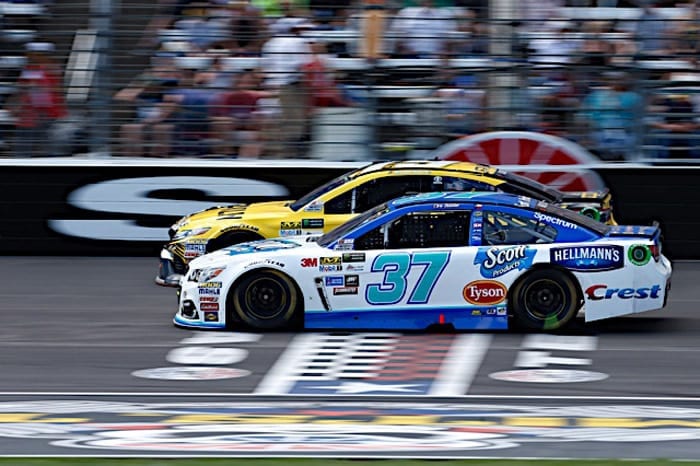 If you were to look at the finishing order, you’d think I was crazy to pick out the driver who finished 21st and the first car one-lap down, but Chris Buescher had an impressive day behind the wheel of the new second team for JTG Daugherty Racing. After failing to make it through inspection to attempt a qualifying lap on Friday, Buescher started Sunday’s race in 38th.

But it didn’t take long for the driver of the No. 37 Chevrolet to work his way solidly inside of the top 15.

Under an early caution, Buescher spun off of the front end of Erik Jones‘ No. 77 Toyota as the field drove down pit road. Though he ended up fully in the pit box and was able to be serviced, Buescher’s jackman was hit during the spin and taken to the infield care center.

For that stop, Ty Dillon‘s jackman jumped in to help out, and though Buescher’s jackman was uninjured, he did sit out the remainder of the race while an RCR backup stepped in.

A later loose wheel mired Buescher one-lap down and he spent the rest of the race fighting to get his lap back, all while posting lap times that were within a few tenths of the leaders.

“Our finish definitely did not define our day,” Buescher said after the race. “It was really disappointing to be involved in the incident on pit road, but we had the speed we needed to get us back in the top 10. They dug all weekend and worked really hard to get a fast car, and we’ll keep using that momentum and working on the 1.5-mile program.”

The bottom line is that Buescher’s team showed signs of the performance that it needed. With five finishes outside the top 20 in his first six starts this season, the record books show yet another sub top-20 result. However, Buescher’s ability to drive through the field the way he did is momentum the No. 37 team can hang its hat on.

Never, ever count out Jimmie Johnson and Chad Knaus. The rumblings through this season have surrounded how the No. 48 team has been “off” in its performance this season. But the fact of the matter is that you’re talking about a seven-time champion. Sure, a lone top-10 finish (ninth at Phoenix) isn’t exactly what has become the norm for Johnson, however a small handful of poor results, doesn’t mean the team is off its game. After all, they’re only human and mistakes do happen from time to time.

Of course, if you were of the belief that something was wrong with the No. 48 team, you’d be convinced those troubles continued when the team got to Texas. After posting the 24th quickest lap in the first round of qualifying, Johnson spun, flat-spotting his tires, and he was left with two choices, with the only logical one of putting a fresh set on and dropping to the back of the field.

It didn’t take long for Johnson to work his way through the field, but it wasn’t until Lap 273 when the driver of the No. 48 car took the top spot for a single lap, before relinquishing the lead to Joey Logano during a round of green-flag pit stops. Restarting third after the eighth and final caution, Johnson quickly moved into second and set his sights on Logano, who did not pit under that yellow.

With 17 laps remaining, he took the lead and set sail for the checkered flag. And though Kyle Larson made a valiant attempt at catching Johnson, too much time spent fighting Logano for second put Larson too far behind with too few laps remaining.

Now the No. 48 team has two weeks to savor its victory over the Easter break, knowing a Chase berth is already locked up.

Where… did the pole-sitter and defending race winner wind up?

Kevin Harvick started on the pole after posting a blistering 198.405 mph lap on Friday afternoon, and if you were to chart his race on Sunday, it would look like a bit of a roller coaster.

The driver of the No. 4 Chevrolet was fourth and seventh in the first two stages of the race, before leading Johnson with just over 30 laps remaining. But for Harvick, the takeaway was easily that he led quite a few laps (77) and was able to bring the No. 4 team its first top-five finish since the switch the Ford.

Last season, Kyle Busch led just 34 laps, including the final 33, to beat out Carl Edwards and Martin Truex Jr., who combined to lead 265 of the race’s 334 circuits. This year, fresh off of late-race disappointment at Martinsville, Busch had trouble in practice that left him with damage on the No. 18 Toyota, and he struggled most of the day with handling, speed and even lapped traffic. But despite those struggles, he was the highest finishing Joe Gibbs Racing driver in 15th.

It actually happened before race day even rolled around. On Friday, during pre-qualifying inspection, nine teams — Larson, Busch, Jones, Buescher, Chase Elliott, Kasey Kahne, Dale Earnhardt Jr., Timmy Hill and Derrike Cope — failed to make it through the process in enough time to turn a lap during the first round.

Before anyone tries to blame NASCAR for the issue, it’s time to place the responsibility where it belongs… with the teams. You can’t really blame the teams for wanting to push the envelope. I mean, isn’t that part of competition? But they also have to be prepared to face the consequences if those gray areas are pushed too far.

The sanctioning body made it very clear at the beginning of the season that issues in inspection would not be tolerated, and as a solution, anyone who fails any section of inspection is required to go back through the whole process. It’s as simple as that, and the only people to blame are the teams themselves.

Why… did Ryan Blaney lose the race?

In his prior 54 starts, Ryan Blaney led just 31 laps in his Monster Energy NASCAR Cup Series career. But suddenly, things turned around for the driver of the No. 21 Ford at Texas Sunday afternoon. After qualifying second Blaney was clearly the dominant car, winning the first two stages and leading a race-high 148 laps.

But a late-race pit stop turned into Texas heartbreak for the 23-year-old, who slid through his pit box and had to back up. After entering pit road inside the top 10, he restarted 17th and was only able to work his way up to 12th before the checkered flag flew. The finish was enough to move him up a position in the points standings, however it’s hard to blame Blaney for walking away disappointed after the race.

“The last pit stop was discouraging,” Blaney said. “I was over the line by a few inches. That sucked. I put us in that hole.”

Despite his disappointment, Blaney was still able to look at the positives coming out of the day.

“We deserved to finish third at worst,” he said during his post-race media availability. “Our car, at its worst point was a third-place car. You definitely think about that and are discouraged about that.

“At the same time, you’ve got to look at the positives, and I think this is the most positive race we’ve ever had as a team, as a whole organization. I definitely think this is a big confidence boost for everybody, especially after last week at Martsinville. You can’t hold your head down about this one I don’t think.”

How… did the repaved surface at Texas turn out?

TMS underwent a major track renovation through the offseason, which included a repave, the widening of Turns 1 and 2 from 60 feet and a reduction in banking in the same area from 24 to 20 degrees. But as everyone knows, repaves can often take a few years before they produce the kind of racing people will enjoy.

Leading up to Sunday’s race, several drivers struggled in practice and qualifying, including a few that were forced to backup cars. Meanwhile, the XFINITY Series race saw quite a bit of single-groove action because of how slick the track was. But Texas continued its work overnight Saturday and into Sunday morning, dragging tires on the track, using the Tire Monster and Kentucky Speedway’s Tire Dragon to help put more rubber into the surface.

From the drop of the green flag, the track “behaved like new asphalt,” as TMS president Eddie Gossage said Saturday (and again after Sunday’s race), but the groove was already wider than it had been for the NXS race. And as the laps ticked off, the track took on more and more rubber, allowing for side-by-side racing and even passing throughout the field.

Of course, the newly-repaved surface is far from ideal, but that’s to be expected and is a necessary evil to fixing a track. However, Gossage and the entire team at TMS should walk away pleased with what we saw this weekend.

LOL, today’s shoutout is a biased swill of crap! Ryan Blaney gets zip today, where clearly he deserves a shoutout as it was his first big stats day, commanding day..despite not closing the deal! Hopefully a ego booster and a sign for him to continue to buckle down and work it, work it!. Good job Team Wood Brothers.

Now if it Clyde Ellliott, your computer would have run out of space regarding gushing praise!! Come on…..you people suck.

My shoutout would be Derrike Cope. The results page shows he finished only 21 laps down. I’m sure he’s celebrating.

I agree with Beth. The teams are to blame for failing inspection. Stop pushing things to the ultimate limit and you won’t have problems in inspection. Is it worth not being able to qualify?

Qualifying positions don’t matter. The race is long enough to make it up. Look at Johnson’s qualifying positions. He was slower than Danica at Texas. It’s not like that during the event. When I watch it always seems to me that he is playing with the field. He complains about the car all race but never runs as bad as he complains. And there’s always a caution by one of the chosen few near the end to get him to the front and after a miraculous series of “adjustments” he shows what the car is capable of.

He says he not very good at qualifying but he has an incredible amount of “luck” during the “race” products.

Wonder if Johnson would even have the success he’s had if he didn’t have Knaus.