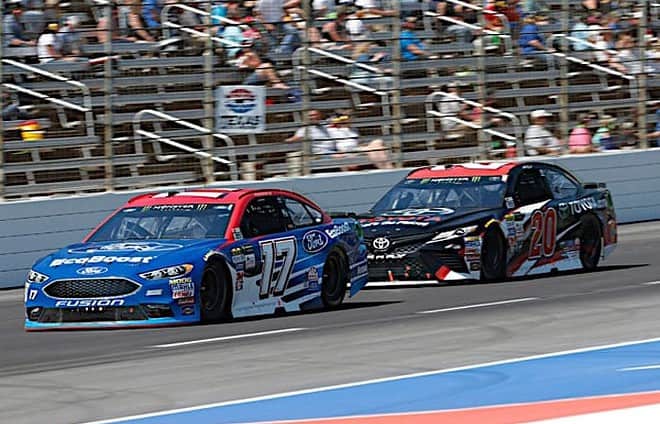 ONE: Next Up, Easter

After seven straight weeks of competition in the 2017 Cup Series season, we hit the first off weekend of the season a little later than last year as we celebrate Easter. So what have we learned so far? First things first, the Penske Fords are fast – lightning. Joey Logano might not have a win yet – teammate Brad Keselowski has two on tracks he’s not won at before – but both have run extremely well and look to be threats at every venue we visit. We’ve also seem Kurt Busch win an emotional Daytona 500 and Ryan Newman come from nowhere to snap a lengthy winless streak of some 126 races with his victory at Phoenix. Jimmie Johnson’s won too after being questioned but that’s pretty much par for the course. But for me the biggest change has been the new stage racing format. The addition of points paying (and Chase playoff points paying) stages is changing the game in terms of race strategy and as teams become more and more accustomed to stages expect this to be even more the case. For me, it’s brought back some excitement to the regular season and that, after the last few years, can only be a good thing. I’m fascinated to see how it all develops over the next 19 races and then, of course, to see the impact the extra points have when it comes down to the serious business of the post season.

In the past year, we’ve seen some statistics from NASCAR that suggest the sport is gaining traction amongst that all important millennial segment (18-34 years old). Simply put this is an absolutely critical segment for NASCAR as it mitigates against the challenges of an ever older, increasingly disenfranchised fan base. If the sport is to grow again, after a prolonged slump, it will be driven by younger fans discovering and falling in love with the sport in new ways. One of those ways is through social media and it’s something, to give NASCAR credit, the sport has done really well with over the past few years – the Snapchat stories each race, for example, or when the drivers do a day-long takeover. And it’s on that note that I finally pivot here to the subject of this point – one Cash Bowyer, the irrepressible Clint Bowyer’s son and this post in particular:

Cash gonna have to have a little more momentum for the new track conditions @TXMotorSpeedway. 😂 pic.twitter.com/MD8gERjdda

For me, this was the best social media moment of last week and a really fun insight into the driver of the #14 Stewart Haas Racing’s sense of humor. This sort of post gets noticed and gets articles written about it and gets eyeballs for NASCAR they might not otherwise. Good stuff by Clint. Here’s to more of these kind of posts.

THREE: Battle of the Champions

We are just two races (out of 20) into the 2017 Formula One season and already it looks like we might be seeing a battle royale between the two most successful drivers of the past decade. In the “red” corner, you have Ferrari’s Sebastian Vettel (see what I did there?), the 11-year veteran and four-time champion (2010, 2011, 2012 and 2013) and opposing him in the “light green” corner, Mercedes AMG’s Lewis Hamilton. The British born veteran of some 190 races is a three-time champion (2008, 2014, 2015) and won the Chinese Grand Prix this past weekend, following Vettel’s victory in the season opener in Australia. Ferrari has struggled some in the past couple years but this season appears to have a car that can challenge Hamilton every step of the way and if you’re a F1 fan that’s exactly what you want. “It is going to be one of the closest ones – if not the closest – I have ever experienced,” said Hamilton to the post-race media scrum of the likely season-long battle between the experienced champions. One thing is for sure, it’s going to make the final segment of qualifying pretty exciting this year as the two protagonists duel for that all important pole position. And that’s just for starters. This battle is going to be one to watch, that’s for sure.

A quick note on Jeff Gluck and his innovative approach to NASCAR journalism this season. You might remember that it was Jeff who shot the video of the Kyle Busch – Joey Logano Las Vegas post-race brouhaha eclipsing even Fox and their one trillion cameras, who didn’t capture the full event. You might also remember that Jeff was the USA Today NASCAR correspondent until the end of the 2016 season. In 2017, though, Jeff has struck out on his own, due to changing family circumstances and used Patreon to raise funds for his endeavors. The micro payments he’s garnered, on a monthly basis – anything from $2 to $100+, from longtime readers and fans has enabled him to parlay these funds into a full time coverage role. And I, for one am thankful this is the case. He’s a breath of fresh air in the NASCAR writers’ world this year.  So all my best wishes to Jeff for this season and beyond. I’ll be reading. Keep up the good work, sir.

Finally this week, I wanted to mention the weekend’s news that three NASCAR drivers will be taking part in the hugely popular “American Ninja Warrior” show (with episodes set to air later this year.) Ricky Stenhouse, Jr. is back for a second attempt having tried it last year and will be joined by Ryan Blaney and also XFINITY Series part-timer Ben Kennedy. Kudos to all three for even attempting the grueling obstacle course (and potential ribbing from fellow drivers should they fail hard). “Being a driver we need to be in shape – have fast reflexes – and this is one of the ultimate tests and I’m excited for the challenge to complete,” said Blaney in an email response to USA Today on his participation. And the youngster is right, it is a serious test. Let’s hope the boys do NASCAR proud and if they don’t, well at least they have their day jobs to fall back on.

Danny starts his 12th year with Frontstretch in 2018, writing the Tuesday signature column 5 Points To Ponder. An English transplant living in San Francisco, by way of New York City, he’s had an award-winning marketing career with some of the biggest companies sponsoring sports. Working with racers all over the country, his freelance writing has even reached outside the world of racing to include movie screenplays.
@dannypeters
Previous Who’s Hot and Who’s Not in NASCAR: Never Count Him Out Edition
Next The Underdog House: NASCAR’s Best-Kept Secret