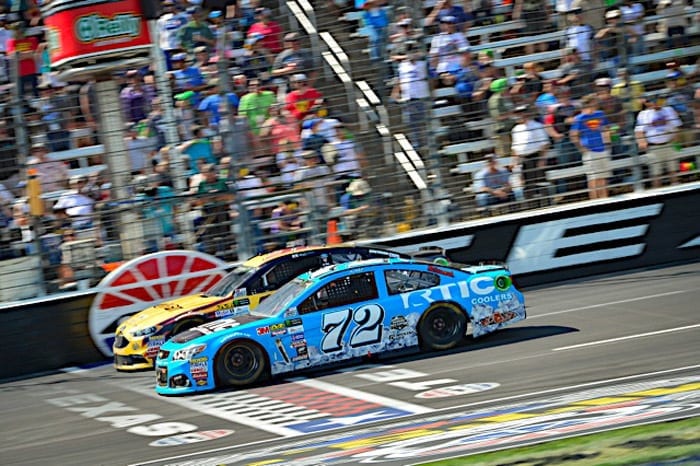 It feels like NASCAR’s small teams get a bad rap right from the start from some fans and even media.  Too often, they’re lumped into a “backmarkers” category, often mocked for their poor performance compared to rivals.  To hear some people talk, you’d think they went out every week and ran in the 20’s or 30’s on purpose, as if that’s all they aspire to do.

And you know what?  It’s wrong.

The truth is, these teams want to perform as badly as anyone out there, maybe even more so.  They’re hampered not by lack of desire, but by budgets.  Even teams who buy chassis or lease engines from bigger teams still have to set them up, typically without simulators or wind tunnel hours. It’s often a shot in the dark based on months-old notes and information.  Even teams with technical alliances still have to prepare their cars, doing it with fewer people and less resources overall.

But while fans often look down on them, these teams are among the most personable and accessible in NASCAR.  Years ago, many drivers of all statuses would sign autographs or meet with fans at their merchandise haulers. But sponsor obligations and other duties take many of the big team drivers away from the fans a lot of the time.

By comparison, small teams and drivers are more than happy to connect. You might find them at the Fanatics tent or the weekly Tweet-ups.  They engage with fans on social media. Monday, Landon Cassill was offering fans all kinds of things, from autographs to diecast cars if they could get a certain number of retweets on their Twitter posts. Cassill has also played miniature golf with fans, among other endeavors. Next up was Ty Dillon; he took a variety of fans’ questions Sunday night on Twitter for over an hour.  They and their teams go out of the way to be accommodating with fans.  Yet some of the most fan-friendly people in the garage are often overlooked because they’re smaller teams not running in the top 10 every week.

Top of the Class: Texas I

Hindsight is, of course, 20/20, but it certainly looked like Ryan Blaney had the car to beat on Sunday.  He raced with the leaders all day long, but then came the kind of decision that will probably keep plenty of teams up at night this year: stay out under caution and try to grab a stage win and the guaranteed points that go with it, or pit and make a bid for the win later.  The No. 21 team chose the first option, and won stage 2 Sunday, but it may have cost Blaney a chance to take home his first Cup win in the process.  Blaney finished 12th, certainly not a bad day, but it’s easy to look at what might have been.

Also having a strong day was Ty Dillon, the top finishing rookie in the race, who finished 17th for his Germain Racing team. Aric Almirola finished one spot behind Dillon in 18th; he and his Richard Petty Motorsports team continue to rebound nicely after a difficult 2016 season.

Rounding out the top group this week are JTG Daugherty Racing teammates AJ Allmendinger and Chris Buescher, who finished 20th and 21st.  It wasn’t a repeat of their stellar Martinsville performance, but it looks as if they’re starting to finish where they should after a rocky start.  Buescher in particular looked very strong all weekend at Texas, his home track.

Michael McDowell was another driver who looked strong all weekend at Texas, and he followed it up with his 23rd-place run Sunday even after a battery issue mid-race.  McDowell will always make the Texas highlight reels for a vicious crash early in his career (the damaged SAFER barrier from the incident is in the NASCAR Hall of Fame’s safety exhibit), but this weekend he also turned some heads at his performance.

JJ Yeley started and finished 27th, respectable considering it’s only the second race for Tommy Baldwin racing this year and Yeley’s first 2017 start.  David Ragan and Landon Cassill had top 30 runs, finishing 28th and 29th respectively for Front Row Motorsports, though Cassill wasn’t too happy after a pit road incident. Rounding out the top-30 finishers was Cole Whitt, whose team has defied expectations at times this year but this week was about where you’d expect them to be.

Matt DiBenedetto missed tying last year’s top-30 mark for Go FAS Racing by a single spot (31st). He heads to the site of his first career top-10 run at Bristol next, so look for another solid run there.  Corey Lajoie avoided trouble en route to a 32nd-place result. For a rookie, finishing races and learning are the main goal in the big picture, so the race was a success in that light, but BK Racing in general needs to run better. Teammate Gray Gaulding finished 34th…again, he logged the laps, and that’s important, but the team as a whole is struggling.  Also struggling on Sunday were Reed Sorenson (35th), Derrike Cope (37th) and Timmy Hill (39th). Jeffrey Earnhardt brought up the rear for Circle Sport in the No. 33 after his damaged car went to the garage after completing just nine laps.

According to a JTG Daugherty Racing press release, the team has partnered with Dell EMC going forward.  The partnership will allow the team to implement more technology into its program, allowing for more remote communication and simulation to improve car setups at the track.

“In NASCAR, we process large amounts of data quickly to gain insights, then develop conclusions and solutions,” JTG Daugherty Racing team owner Tad Geschickter said in the release. “Additionally, we leverage resources located in remote locations so there is a need to move data to multiple points quickly. Dell and Dell EMC provide solutions to accomplish this seamlessly.”

Can't hang our heads about today. Keep working hard and having fast cars like that our time will come!! Thanks 21 team. Happy off week!

I didn't get to see if but I take it @JimmieJohnson is coming out of his slump/drought/funk. Shocking! He just might make it after all.

When ur at the @TheMasters and have to create your own fun with your boss while it's raining. Off to @kroger to grab some steaks for dinner! pic.twitter.com/5mr5XgIKLt

How much worse does Danica have to do to be part of “The Underdogs” conversation?

This is about under-funded teams, not over-hyped under-talented drivers with more than enough (for now) sponsorship money.

But Blaney has been running great and I don’t think you’d consider him under-funded, he has a sponsor.

On the flip side, Danica has been sucking and lost her sponsor and is therefore technically underfunded.

So if the shoe fits….

I’d like to know how much sponsor money the Wood Brothers get compared to Hendick and Gibbs.

And doesn’t be under-talented by definition make her an underdog?

She’s not with an underdog team. Her talent lets her run with the underdogs.

does it really matter how good or bad she does? Most of the drivers competing will never win a Cup race. And look at the percentage that are, in one form or another, “pay drivers”. If that car wasn’t out there, and if you think some kid would get it on talent alone, you’re smoking something you shouldn’t, how many people on that team wouldn’t be working in racing?
Not a fan of hers just get tired of the hating.

This is spot on. The problem is that most “race fans” are totally clueless about what really happens in racing behind the scenes and even more clueless about how much it costs to race and how it gets paid. You want to know more? Go to your local short track and volunteer with a good race team, you will learn a ton, especially when you start to see what it really costs to race, even at the local level.

It’s interesting that Jeffery with that Earnhardt name wouldn’t have more going for him. Don’t know much about the Circle Sport organization but he doesn’t seem to be doing much. One would think that someone with an Earnhardt name would have more opportunities unless the driving talent just isn’t there. Any thoughts? Is the #33 attached at all to the Childress organization? Why wouldn’t Junior give the kid an opportunity to cut his teeth at JR Motorsports if he has the talent since he’s family?

How is Blaney in this discussion? Aren’t they basically a 3rd Penske car?

Hi guys…here’s a link to how I choose to define the teams for this column. It’s basically based on a combination of budget and performance (the previous year’s to start the season); as you can see, the No. 21 fits the criteria based on this. If they run with the elite all year, they will come off the list, as did Furniture Row once they earned it.
https://www.frontstretch.com/2017/02/21/the-underdog-house-whats-a-nascar-small-team-anyway/

Bill B
Reply to  Amy Henderson

Thanks Amy. We’ve had this discussion before and I get it. I was just being a smartass (or dumbass, depending on whether you found my comment amusing or not).