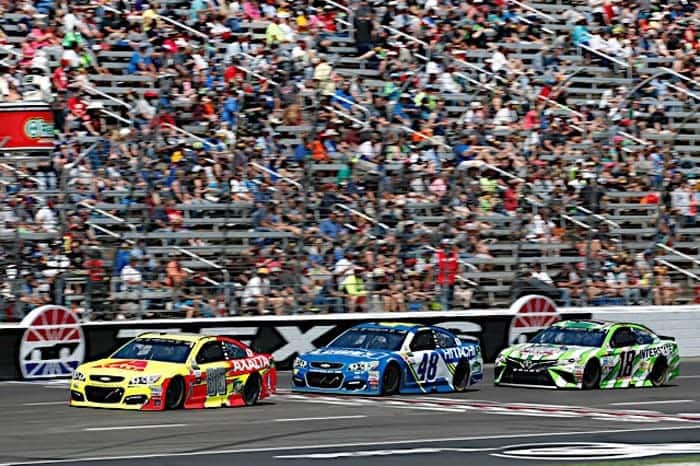 Prior to the Toyota Grand Prix of Long Beach, the Monster Energy NASCAR Cup Series tackled the revamped Texas Motor Speedway.  The race itself turned out to be a little better than everyone thought it would be.

Prior to the race starting, Jamie Little conducted a one-on-one interview in the coach lot with Jimmie Johnson.   I’m not sure why they did it so close to the race, but viewers got to see Johnson’s thoughts on the new track surface and what he thought the race was going to be like. It was a nice look at the thought process going into the race, and I personally thought it was interesting. Johnson’s thoughts pretty much mirrored everyone else there. Basically, ‘what are we getting ourselves into?’

I still don’t think that FOX is really talking to enough drivers on its pre-race show. Sure, plenty are covered on NASCAR RaceDay on FOX Sports 1, but that’s the pre-pre-race show. Michael Waltrip shouldn’t be left to do it himself. I have no doubt that FOX’s pit reporters are pretty busy immediately prior to the race doing their leg work for their in-race reports, but I feel like we should have more interviews. Those interviews don’t necessarily have to be of the sit-down variety like what Little did Sunday, but at least something with some good information.

During the race itself, I found that FOX did a good job early on of showing as much racing for position as it possibly could.  I don’t know if this was a concerted effort to make the new surface look as good as possible, or if it was just a spur of the moment, but it was enjoyable to watch.

The booth was convinced that we were going to see a tough race. Jeff Gordon even stated that “this really is going to be a race of survival today” on lap 27. While the race was run in a start-and-stop fashion at the beginning, it actually opened up later in the event.  I think it legitimately surprised the booth, and they were happy to be able to call side-by-side action and drivers using the second lane late in the race.

Later in the race, there was a near wreck when Ryan Blaney and Brad Keselowski nearly collided. What actually happened was that Corey LaJoie got loose on his own and had to correct. Blaney nearly ran in the back of LaJoie and lost all his momentum.

While it looked in the replay like LaJoie may have clipped the apron, there was another side to the story. Turns out, LaJoie was leaking fluid for darn near the entire second half of the race.

Ever ran 300 miles with your rear tires covered in oil? Try it out at 200mph sometime, it's a blast. pic.twitter.com/DNN1MjvNLz

Obviously, given how fast Texas Motor Speedway is, having to deal with that situation for much of the race bites. LaJoie was actually pretty fast early on, racing into the top 20 at one point.

The rear of LaJoie’s No. 83 was not as bad as depicted above at the time of his near contact with Blaney, but it was definitely discolored. Had LaJoie slipped on his own oil, that’s a perfectly legit reason to get loose.

Blaney appeared angry at LaJoie and gave him a bump exiting Turn 4 a couple of laps later. That earned a rebuke from Darrell Waltrip, who thought that it wasn’t necessary. That’s completely fair. It was one of those classic instances in which Blaney overreacted without knowing the facts. Waltrip seemed to think that Blaney was going to ruin his own race trying to get even with LaJoie.

Post-race coverage was very brief on account of the race running long. Viewers only got interviews of the top-two finishers (Johnson and Kyle Larson) and a check of the points before FOX left the air.

Overall, I thought that FOX did a good job showing the on-track action on Sunday. The viewers were not restricted to the very front of the field, either. FOX filled the quota with as much action as they could early on.

The middle portion of the race, however, got away from that. Yes, there were long green-flag runs, but FOX should still take pains to show the good stuff.

I found that Darrell Waltrip still cuts off Gordon a fair amount. The most notable instance of this was Johnson’s pass for the win on Joey Logano on lap 318. I don’t like that. With the amount of time he has spent in the booth, Gordon has an idea of what he’s doing now. Last week, we talked about courtesy, and cutting someone off like Waltrip does is not courteous.

Finally, I had some issues pertaining to the coverage of Dale Earnhardt Jr.’s move up through the field. He started 37th and we saw footage of him fighting for position way down the field early on. Then, you got bupkis. All of a sudden, he’s up to sixth. I was watching the race and wondered how that happened without even a small mention. You cannot simply use the FOX Box as a crutch. You have to use everything at your disposal.

That’s all for this week. This upcoming weekend is Easter weekend, and it’s just about the leanest race weekend of the entire season as far as racing goes. All three of NASCAR’s National Series are off.  The Verizon IndyCar Series, Pirelli World Challenge and all of IMSA are off.

However, there is one major series starting up. That is the FIA World Endurance Championship, which starts Sunday with the 6 Hours of Silverstone. The European Le Mans Series serves as primary support. TV listings can be found in the TV Schedule.

In the Critic’s Annex later this week, I will cover the XFINITY Series My Bariatric Solutions 300. The race may be named for a local outfit that provides procedures to help the obese lose weight, but was the broadcast obese with issues? Find out Thursday in the Frontstretch newsletter.