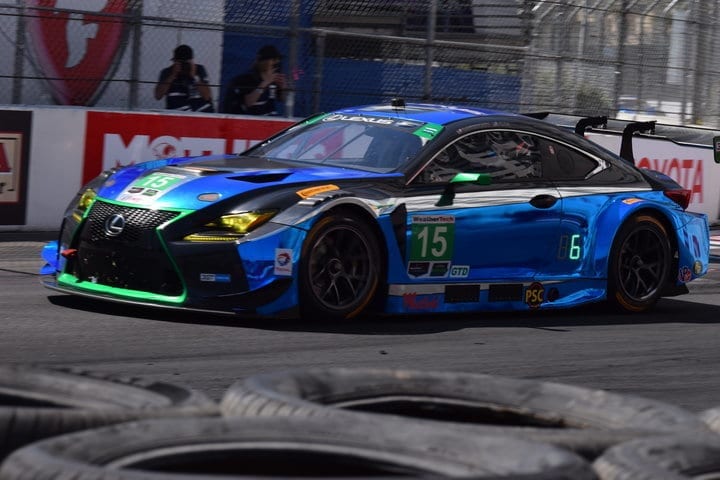 On Tuesday, IMSA announced that Robert Alon has been placed on probation for the next three races for his racecraft on the final lap of Saturday’s BUBBA Burger Sports Car Grand Prix at Long Beach.   The penalty stems from a move Alon made for fifth-place in GT Daytona at the hairpin on the final lap.

Alon was running in seventh position while Turner Motorsport’s Jens Klingmann and Michael Shank Racing with Curb-Agajanian’s Jeff Segal fought for fifth in front of him.  On the final lap, Alon dove to the inside of both of them at the hairpin and smashed into Segal.  The hit put Segal into Klingmann and all three drivers into the wall.

The wreck changed the outcome of the GT Le Mans class as the GTLM class leaders were caught in the traffic jam caused by the wreck.  Tommy Milner effectively stole the class win from his teammate because he was able to get back going the fastest.  Garcia was trapped on the outside and ended up finishing fifth in class.

In their ruling, IMSA stated that Alon’s actions constituted an unjustifiable risk, which is a violation of Article 30.6 of the 2017 IMSA Sporting Regulations.  As per Article 30.6, this ruling is conclusive (conclusive is actually capitalized in the regulations) and cannot be appealed.  According to said regulations, penalties for an unjustifiable risk in IMSA can be whatever the officials deem necessary.  In 2014, IMSA suspended two drivers, Alex Tagliani and Gaston Kearby, in separate incidents under this policy.  Tagliani’s violation occurred in a practice session at Watkins Glen, while Kearby’s crash was during the 12 Hours of Sebring (and hurt Tagliani in the process).

Even though he was eligible to return after serving his one-race suspension, Kearby has not returned to the IMSA WeatherTech SportsCar Championship since the Sebring crash.

Alon’s probation will be complete after the Sahlen’s Six Hours at the Glen in early July.  Until then, IMSA officials will be watching Alon’s actions on-track closely.