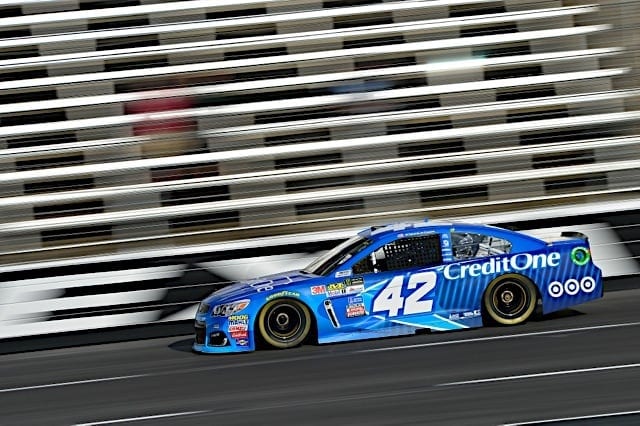 Seven races in, Kyle Larson is looking like the driver to beat in the Monster Energy NASCAR Cup Series.

This weekend should be yet another notch on his belt on the way to a playoff berth and potential first title. Or… it would be, if the series wasn’t off this week.

The week of April 10-16 marks the first off-week for the Cup Series in 2017, as well as another week off for the XFINITY and Camping World Truck series. No NASCAR national series action for the first time since February, giving drivers and crew members — many of whom have made treks around the East Coast, over to the West Coast and back — a much-needed breather.

But you wonder what that kind of break does for someone like Larson, who leads the regular point standings by 17 following last weekend’s event at Texas Motor Speedway. No, it’s not an insurmountable gap, and it also matters fairly little where he is in points since he has a win to his credit and therefore an automatic playoff spot should be in his grasp, barring a 26-race regular season with more than 16 different winners.

Still, he’s on a roll. His current stats — a win and five top fives — already look great on paper, and that’s not even including the fact each and every one of those non-win top fives are runner-up finishes. No one wants to break up a good thing, right? Except that’s exactly what even a week break can do, let alone a multi-week respite (trying to gain a leg up in the Truck Series this early in the year? Haha, you’re funny). Just one week out of the sun and suddenly everyone’s caught back up, refreshed and restored after some time away from the track.

Or perhaps he’ll be fine.

You get the idea. The point is that each season has this break that occurs in either late March or sometime in April. The question, then, concerns what the standings look like before the fact and after it.

Going back five years, the first stop is 2012, when the series dispersed after six races following Martinsville Speedway. Greg Biffle held the point then, up six points over Dale Earnhardt Jr. Six races later, following the Coca-Cola 600, Biffle had actually increased his points lead to 10, while Earnhardt fell to fourth. The newest runner-up at that point? Matt Kenseth, who had been tied for third after Martinsville. Meanwhile, Tony Stewart, who had been tied with Kenseth after six, was ninth by the time the teams left Charlotte Motor Speedway.

So, some changes, sure. But Biffle, the driver whose shoes Larson currently fills? Just fine. The same can be said for Jeff Gordon in 2014. Eight races in (the break occurred after Darlington Raceway on April 12), he was ahead. Eight more races down the stretch, there he was, still 20 points ahead. Then there’s Kevin Harvick, who led pre-break in 2015 and 2016 and held on to that lead afterward, too (though by then there were the Chase standings, which muddied the issue a bit, since Harvick didn’t always necessarily have the most wins up to either point).

But some years find drastic changes, too. Earnhardt was on top by 12 points in 2013 after five races, leading in to the first break of the season. Five races later, he was third, but 59 points behind leader Jimmie Johnson, who had been 16 behind in third just five races prior.

Regardless, a check back at the last five years of Cup racing should prove soothing to Larson. Only Brad Keselowski’s really been able to challenge him, with his 27th-place finish in the Daytona 500 to open the season his only hiccup. But Keselowski, despite his two wins, doesn’t have the top-two-’em-to-death consistency of Larson, which places him slightly further back in the running order (albeit in the lead for the playoffs, given his two victories that assure him a spot as long as he completes the regular season). So Larson’s the top dog, and more often than not, said dog doesn’t lose that status right off the bat after a jaw-dropping start.

Usually it happens much later in the season. After all, of all the years mentioned here, only one driver leading before the first break of the season went on to win the championship: Harvick in 2014.