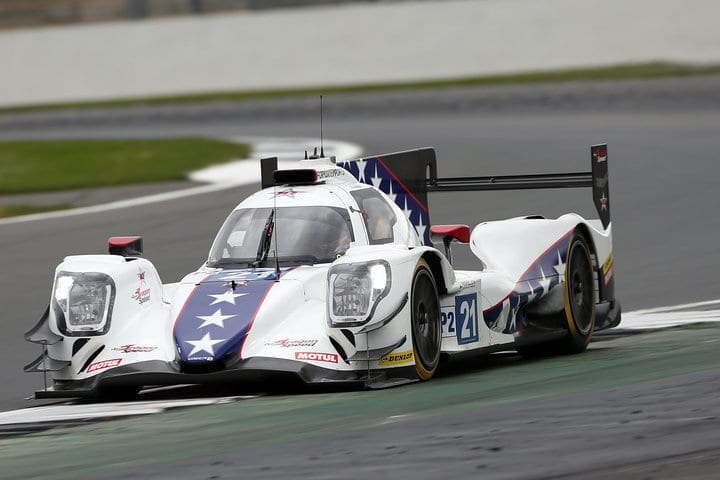 Back in January, DragonSpeed’s Ben Hanley was the fastest driver of all at the Roar Before the 24 in his ORECA 07-Gibson.  Going back to Europe has not diminished his pace at all.

On Saturday, Hanley won the overall pole for the European Le Mans Series’ season-opening 4 Hours of Silverstone with a lap of 104.040 seconds (126.678 mph).  The lap is an all-time track record for the LMP2 class at Silverstone Circuit’s Arena course.  Hanley’s lap is also eight-tenths of a second faster than any lap turned in by LMP2 competitors in the WEC’s LMP2 class so far this weekend.

Silverstone serves as the European race debut for the new 2017-spec LMP2 cars.  The cars all run 4.2-liter Gibson V8 engines tuned to produce approximately 600 horsepower.  That number is an increase of over 100 horsepower from last year.  As a result, the top nine cars in LMP2 broke the previous lap record.

Hanley’s lap was more than a quarter of a second faster than United Autosports’ Filipe Albuquerque in the best of the Ligier JS P217’s.  Enzo Guibbert was third quickest in the No. 39 Graff Racing ORECA 07, followed by Ryo Hirakawa in the G-Drive Racing No. 22, which in reality is a second DragonSpeed entry.  Andrea Pizzitola in the Algarve Pro Racing Ligier JS P217 will start fifth.

In the LMP3 class, AT Racing’s Mikkel Jensen won the class pole with a lap of 113.665 seconds (115.951 mph).  Jensen’s lap was an eighth of a second faster than United Autosports’ Sean Rayhall in second.  Teammate Wayne Boyd was third quickest, followed by Panis Barthez Racing’s Simon Gachet in fourth.  M. Racing-YMR’s Alexandre Cougnard was fifth quickest.

Finally, only six GTE class cars are entered in Silverstone.  That doesn’t necessarily mean that qualifying wasn’t competitive.  Nicki Thiim, a factory Aston Martin racer who is doing double duty this weekend, won the GTE pole.  Thiim’s lap of 118.269 seconds (111.437 mph) in the No. 90 TF Sport Aston Martin is only three-tenths slower than what Thiim did in his newer, GTE-Pro class entry in the WEC.

Thiim’s lap was two-tenths of a second faster than Ross Gunn in the AMR-Beechdean Aston Martin (Note: Beechdean is a brand of ice cream).  Matt Griffin, who is doing triple duty between WEC, ELMS and the British GT race at Oulton Park 130 miles away this weekend, was third fastest.

The European Le Mans Series’ 4 Hours of Silverstone will get the green flag at 9:30 a.m. EDT on Saturday.  The whole race will be livestreamed at the series’ website, europeanlemansseries.com.