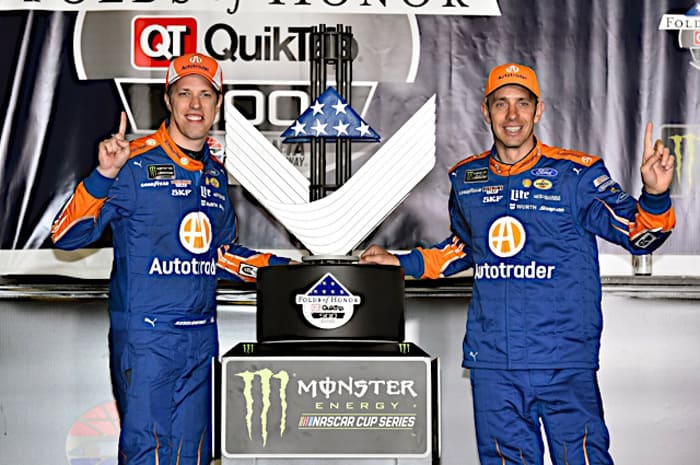 Who’s in the headline – The season started with Kurt Busch in Victory Lane for the first time in his career at Daytona, along with his Daytona native crew chief Tony Gibson. Brad Keselowski is the only two-time winner in the series, while Kyle Larson has finished in the top two in all but two of the first seven races, including the second win of his career. Jimmie Johnson was off to possibly the worst start of his career but won his 81st career race last weekend at Texas.

What happened – The new aerodynamic package is making the racing more intense and passing easier, from third place on back in the fields. The leaders have a greater aero advantage now than they did last year. As a result, the number of drivers dominating the laps led categories is greater compared to years past.

The new stage racing has also produced the desired, mid-race intense racing. The positioning for the playoffs will be more intense thanks to the playoff points that are accumulating throughout the year.

Why you should care – The greater difficulty in driving the cars has led to better racing in dirty air, but the clean air advantage has been increased. NASCAR still needs to work on letting air under these cars if they want to make the leader of the race more susceptible to passing. Like the new point system or not, the racing during the middle of the events has been far greater than in many years.

What your friends are talking about – It was announced this week that NASCAR will experiment with two different tire compounds during the all-star race. This column has been begging for years for three different compounds that could give crews flexibility in strategy. The rumor is that NASCAR is testing it to see if they will implement it for the whole season in 2017.

Lewis Hamilton says he’d like to run a NASCAR race. We’ve seen Kimi Raikkonen dabble in the Truck Series and Jacques Villeneuve has four Cup starts to his name. Juan Pablo Montoya never won an F1 title, but he certainly competed well in the Cup Series. Years ago, Mario Andretti dabbled in Cup cars as well. It would be a huge event should the former F1 champion make a start in one of the top series in NASCAR.

Official Artist of NASCAR, Sam Bass, is in need of a kidney. Bass has long suffered from diabetes and the toll on his body has resulted in his kidneys failing. He is now hoping to find a donor of a kidney so that he can have a transplant and continue his life as one of the best race car artists in the world.

Who is mad – Joe Gibbs Racing is none too pleased with their start this year. Outside of Kyle Busch, who is seventh in points, the rest of the stable is 16th or worse, with Matt Kenseth and Daniel Suarez 22nd and 23rd in points as of now. It is early, and the new aero package has thrown a curveball at teams. That said, the dominant team of 2016 is less than thrilled at their sluggish start.

Who is happy – Ryan Blaney is showing flashes of brilliance during his young career. He’s putting it all together this season. Sitting sixth in points after seven races, he’s right in the mix of drivers without a win that are knocking on the door of Victory Lane this young season. It won’t shock anyone to see the third generation driver taking home a trophy this season.

Seven races into the season there have been six different winners this year. With 19 races left before the playoff cutoff, if there are 10 new winners then someone with a win will not make the playoffs. That said, there most likely won’t be 17 unique winners. For now you have Keselowski with two wins, Larson, Johnson, Martin Truex Jr., Ryan Newman and Kurt Busch.

The remaining drivers who would be eligible for the playoffs if they started now and their point position:

The season has had some excitement, but the aero advantage of the leader has put a damper on the overall feel of the races. NASCAR has shown a willingness to make changes during the season and hopefully they’re going to keep trying to make the product better. For now we’re going to give it a hopeful two ice cold Dale’s Pale Ales.

Where do you point your DVR for next week – The series heads to Bristol, Tennessee for the first event of the season at the historic half mile. The event is Sunday, April 23 at 2:00 p.m. ET. It will air on your local FOX affiliate. It can be heard on the local PRN affiliate, goprn.com and SiriusXM NASCAR Channel 90.

Multiple tire compounds, like knockout qualifying are ideas that are quite successful in other series of racing. Nascar however wasn’t able to capitalize on the qualifying idea. one because they couldn’t totally make the break from the old ways, and two because unlike in F1 where you qualify doesn’t really matter.
My suspicion is that they will neuter the tire compound issue as well.

It is funny that when this was suggested several years ago both nascar and goodyear screamed that it wasn’t practical. Desperate times call for desperate measures I suppose.

If Lewis Hamilton wants to try a stock car, it might be a good idea to put him in a road course event, maybe in a Wood Brothers car. Dan Gurney had pretty god runs in the 121. Mario won at Daytona but times were different then.
If Hamilton runs a restrictor “race” he’ll never come back.

On June 27, 1998 Adam Petty won a 300 lapper at I-70 Speedway in Missouri. I’ve been there and it’s a long drive from Toronto. The driver who finished second was…….Jimmie Johnson!

You see these cars come down the straight and the splitter is absolutely glued to the track. That has to end before we’re going to see good racing at the front. They need to raise the splitter height, not as high as Xfinity but raise it nonetheless. Until they do, the glued down front end in clean air is going to win.

Only at matter of time till the Magic 8 ball runs out of ideas……….last one watching, please turn out the lights.

In a sign that the ratings decline may have eased, this year’s Easter Day ratings were on par with those in 2016.

Brian will expect more money in the next contract because of that.