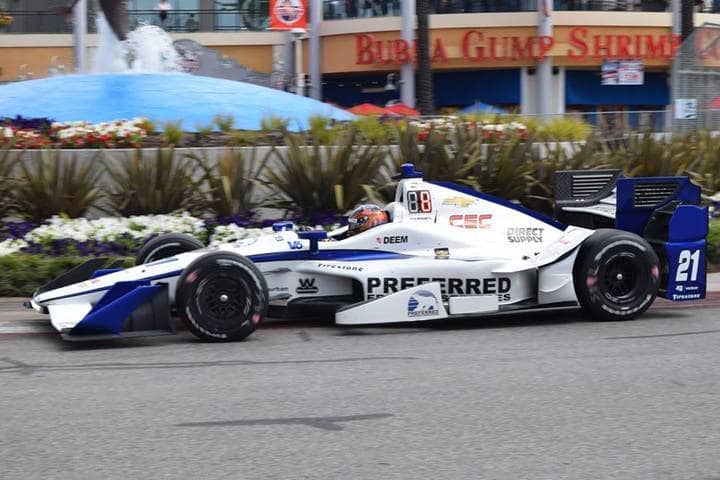 On Tuesday, JR Hildebrand has officially not been approved to race this weekend at Barber Motorsports Park after breaking a bone in his hand at Long Beach.  Indy Lights veteran Zach Veach, who announced plans to make his INDYCAR debut in the Indianapolis 500, will have his debut pushed up as he will sub in the No. 21 for Hildebrand.

Hildebrand is naturally quite bummed about having to sit out of this weekend’s race.

“This obviously is not how I had hoped this would play out, but I’ve done everything there was to do since surgery last Tuesday with good results,” Hildebrand said in a press release.  “It seems the risk is still too high given the initial extent of the injury.  The doctors I’ve worked with have been awesome to get my fractures sorted out and I trust their view of the situation.”

Hildebrand suffered the injury on the final lap of the Toyota Grand Prix of Long Beach when Mikhail Aleshin blocked a move that Hildebrand made for position.  As a result, Hildebrand hit the left rear of Aleshin’s No. 7 and went off-course.  Since Long Beach, Hildebrand has undergone surgery on the hand at the Indiana Hand to Shoulder Center in Indianapolis.

For Veach, his debut comes a little earlier than planned.  While he’s not exactly pleased about the circumstances, he will give Sunday’s race his best shot.

“First and foremost, my thoughts are with JR and his recovery, that’s the most important part of this!,” Veach stated.  “My heart goes out to him as I suffered a broken hand a couple years ago and I wouldn’t wish that upon anyone. This isn’t how any driver wants to get his first race but with that said, I’m extremely thankful for the opportunity to sub for JR.

“Ed (Carpenter) gave me my first chance to test an Indy car a few months ago. It’s going to be very special for me to be back in that same car representing Fuzzy’s Vodka at Barber,” continued Veach. “It’s going to be a lot to take in in a short amount of time, but I’m really excited to do the best I can for the team, as well as JR!”

For now, it is a one-race deal for Veach to drive the No. 21.  However, there are only six days between Barber Park and Phoenix, a short oval.  Hildebrand will rest this weekend and hope he can get approved for Phoenix.