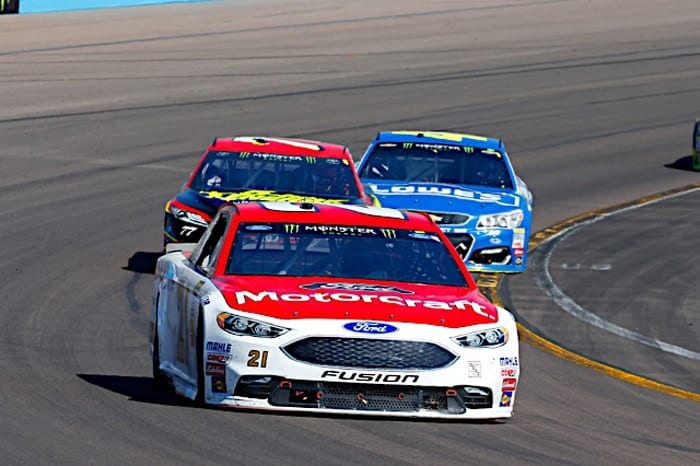 We’re seven weeks into the 2017 season, enough time to start seeing some trends.  Since there was no Cup race this weekend, we’ll use this week to take stock of our smaller teams and who’s headed in the right direction.

If you’re not sure who’s on our small team list and why, please take a look at this column, which explains my criteria for the season.

Top of the Class…so far

Wood Brothers Racing (Ryan Blaney, No. 21): Obviously top of the class as Blaney sits sixth in points with three top tens on the year.  It’s looking like this team will earn its way off the list at year’s end if they continue to perform, which is how it should be for these teams as they improve.  The No 21 is well on its way to at least mid-tier status and could well be elite by the end of the season.  That’s great for the oldest team in the sport, which once was among the top teams in the garage every week.  After all these years, they’re getting their mojo back.

Richard Petty Motorsports (Aric Almirola, No. 43): After a tough 2016, this team winds up on this list for the first time; they were a solid mid-tier previously, and they’re looking that way again more and more each week.  At 18th in points (ahead of heavy hitters like Dale Earnhardt, Jr. and Matt Kenseth), Almirola has had some strong runs, including a top five at Daytona, where he’s won in the Cup Series before and most recently won in his part-time XFINITY Series rice last season, so a win, and a Chase berth, isn’t out of the question—something the three teams in the top group have in common.

JTG Daugherty Racing (AJ Allmendinger, No 47 and Chris Buescher, No. 37): Both Allmendinger and Buescher struggled hard early, as the team adjusted to being  two-car operation for the first time, but have righted the ship admirably.  Allmendinger ahs a top five and a pair of top tens, most recently at Martinsville, where Buescher also finished a respectable 11th.  This is the only team in this group that boasts two Cup Series race winners.  Allmendinger is always a threat on road courses, especially Watkins Glen; that’s a given, but he’s also in the mix at short tracks.  Buescher is a NASCAR champion, and he’s adjusting well to better equipment this season.  Look for him to continue to grow.  Right now, Allmendinger has the edge as far as being the better bet for a Chase spot, but Buescher has been there as well.  Overall, they look strong and are getting stronger each week.

Germain Racing (Ty Dillon, No. 13): Dillon’s actually ahead of Allmendinger in driver points, but he hasn’t scored a top ten this year…and considering that RCR upped its support to the No. 13 considerably, he should be slightly better.  Realistically, this isn’t a Chase team without some serious luck somewhere along the line (like at Talladega in a couple of weeks).  RCR as a whole is struggling, and their more experienced teams are struggling just as much without a rookie behind the wheel.  This team us undoubtedly having the kitchen sink thrown at it because of Dillon but isn’t the best RCR affiliate in this group.

Leavine Family Racing (Michael McDowell, No. 95): In their second year of an RCR alliance, this team is coming along nicely.  McDowell, finally in the driver’s seat for a whole season, has a respectable 24th-place average finish, a far cry from just a couple of years ago when this team was happy with a 30th. This will be the first year where this team is running the whole season with their own driver all year and they can settle in and see where they’re capable of running.  Overall, there’s a lot of reason for optimism here.

Front Row Motorsports (Landon Cassill, No. 34 and David Ragan, No. 38): This team brought back Ragan this year (he’s won for them at Talladega) and paired him with Cassill’s outstanding talent.  They should be running in the top 25 most weeks, and Cassill is right there with a 25.1 average finish.  Again, the Chase is a longshot, but you have to like their chances at Talladega, where Ragan has won and Cassill has quietly put up an impressive record while driving underfunded cars.  Either of them could win it if the cards fall just right.  Other than Talladega, though, there’s room for improvement. Ragan’s average finish is just shy of 28th, so overall the team needs to pick it up just a little to be where they should be.

TriStar Motorsports (Cole Whitt, No. 72): While they’ve fallen back to earth after a stellar start, this team has exceeded expectations at times this season.  We’ve gotten a glimpse of just how talented Whitt is when he ran a tough 20th at Atlanta, a track that eats many small teams for lunch.  While Whitt is 31st in points and isn’t going to win a race without a miracle, he and veteran Frank Kerr have made a pretty big statement with what they have.

Go FAS Racing (Matt DiBenedetto, No. 32): For a team this small, the jump from top 35 finisehs to top 30s is a big one, much bigger then most people probably realize, and this team has made it look relatively easy.  DiBenedetto is ahead of David Ragan in points and has fit in very well.  After a few years of driver-by-committee, the team went with DiBenedetto full-time this year and it’s already paid off.  They’re realistic with their goals, and look to finallybe gaining a foothold.

BK Racing (Gray Gaulding, No. 23 and Corey Lajoie, No. 83): This team has fallen off steadily for the last few seasons; they had days when they were capable of top 30s and the occasional top 25, but haven’t looked that way consistently for a few years.  While both Gaulding and Lajoie are talented youngsters, this team might have done well with a veteran driver, if one could be found willing to drive struggling equipment.

Premium Motorsports (Reed Sorenson, No. 15 and Derrike Cope/others, No. 55): Sorenson, who has become the team’s number one driver, has shown flashes of talent but has never quite panned out.  He’s been accused of being lackadaisical in the past, but that isn’t this team’s main problem.  While they’ve had some good showings, team owner Jay Robinson was never really a factor in the XFINITY Series, and the Cup Series is more expensive and more difficult.  He’s outclassed, and it shows.  Cope is certainly a veteran presence but hasn’t shown much in his limited schedule.   With the field as light as it’s been, there’s no harm in this team staying the course—the purse money is better than NXS, but they need to find something more to be competitive in this group.

Circle Sport (Jeffrey Earnhardt, No. 33): Earnhardt was a bit of a surprise choice for this team.  He turned laps and learned last year, but whether he’s experienced enough to really grow the team the way it needs remains to be seen.  This is a team populated with good people, but 2017 has been a tough year so far.

Rick Ware Racing (Timmy Hill/others, No. 51): Another smaller NXS team, RWR has perhaps struggled the most in Cup this year.  They’ve enjoyed the luxury of small fields, meaning they make the field every week, and that’s a good thing for them as it allows them to log some laps and learn.  The hard part is that their inexperienced lineup doesn’t have enough time in the series and virtually none in good rides, and that makes it hard for them to give input.  They can and will get better, but right now, better means bringing cars that hold together for a full race every week.

Leavine Family Racing will once again open their doors to some lucky youngsters this summer with the return of Camp 95, a two-day session for high school students to experience different aspects of working in motorsports.  Applications can be found on the team’s website and open May 1st.  The last day to apply is May 31st.  Lodging for campers and their families will be provided this year by Hotels for Hope.

“We are excited to bring back CAMP 95 for a third year,” said LFR VP, Jeremy Lange in a team release. “Hearing the feedback and seeing the faces of the high school students who have experienced the event is all it took to want to continue this program. Not sure how we can top last year’s CAMP 95 but we are sure going to try. The main goal of the event is to provide a broader look at the NASCAR industry and this year will not disappoint.”

Reed Sorenson has a new sponsor for this weekend’s race at Bristol. Low T Center wil be on the hood of the No. 15 for Premium Motorsports this week.

Sponsors returning to cars at Bristol include CSX/Play it safe on the No. 34 of Landon Cassill, Jacob Companies with the No. 38 of David Ragan and Cosmo Motors on the No. 32 of Matt DiBenedetto. RTIC Coolers is back with Cole Whitt after inking a multi-race deal.  WRL General Contractors will be on Michael McDowell’s No. 95.

Rick Ware Racing announced that Josh Bilicki will  pilot the No. 51 at Sonoma and Watkins Glen later this season. Bilicki, who has extensive road racing experience, will make his Cup debut with the team.

“Words can’t describe how excited I am to be making my NASCAR Monster Energy Cup debut with Rick Ware Racing,” said Bilicki in a team release. “First, I can’t thank Rick enough for giving me this opportunity to get behind the wheel of the No. 51 RWR Chevrolet. Rick, like myself, comes from a road course background, so I feel like this is a very natural fit.

“I’ve been around the team for several of this season’s Cup races and the team is very impressive and are improving every week. I hope to earn some respect from my competitors and turn heads in the process.”

Thanks you. This made my day and that's tough to do when I'm on a boat in the Bahamas. #marrymedaisy https://t.co/pspscRARb9

Cleaning and restocking the pitbox for @BMSupdates ??⚙️ #NASCAR pic.twitter.com/MNce2fmj4t

Either somebody is in @dennyhamlin parking space @The_Greenbrier or he had a long drive from Charlotte in that golf cart pic.twitter.com/PuFNt7RGvV