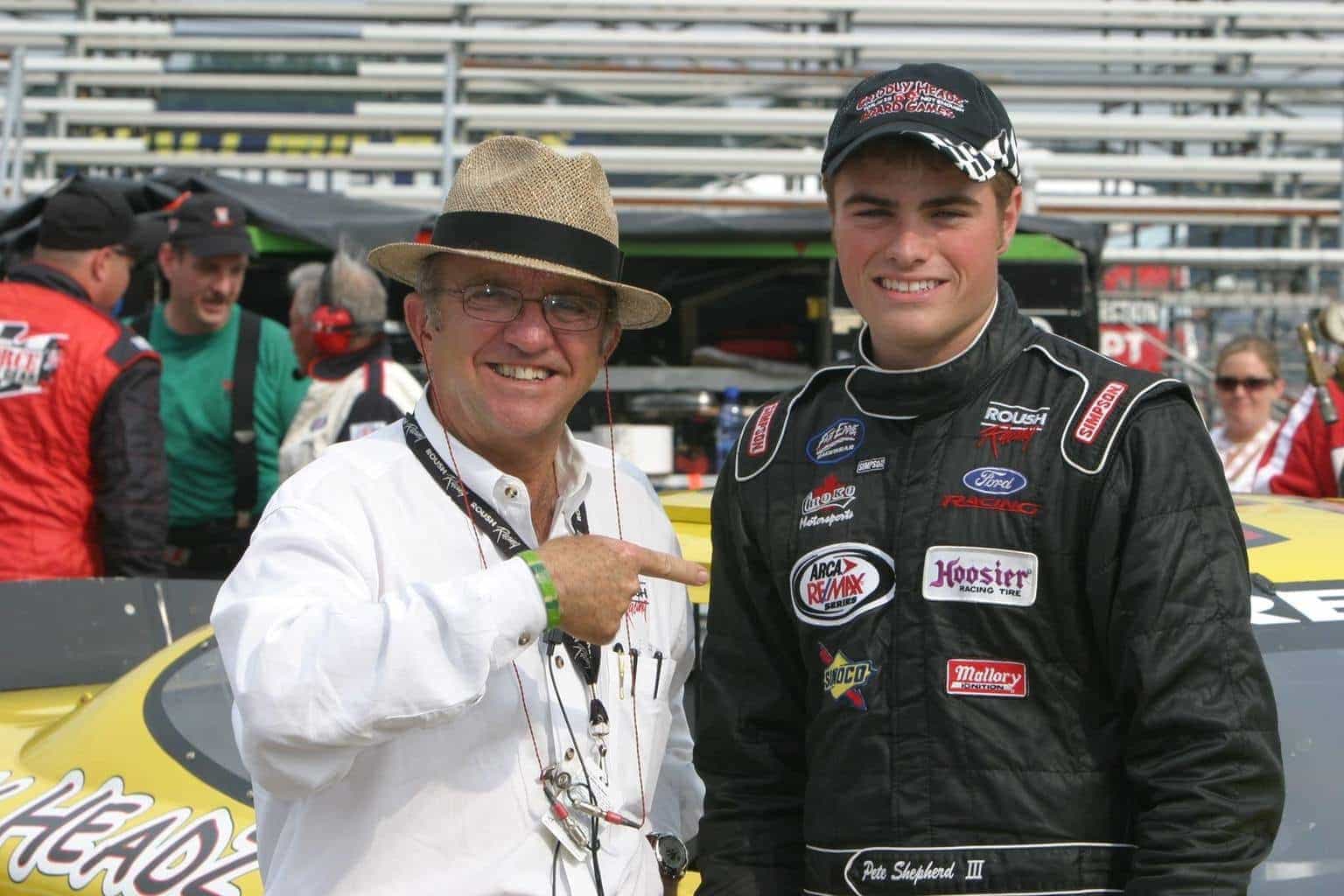 If you look over the names of drivers who have raced for legendary NASCAR car owner Jack Roush, there are many that prove synonymous with the Camping World Truck Series. Todd Bodine, Ted Musgrave, Greg Biffle, even a moonlighting Mark Martin come to mind. There are other Roush racers, however, who went a different path in their racing lives.

Pete Shepherd is one of them.

Hailing from Ontario, Canada, it didn’t take the 30-year-old long to fall in love with racing, as it was a family tradition from the start. Quickly jumping behind the wheel, Shepherd reached the CASCAR Super Series in Canada before jumping into the ARCA Racing Series and then the national NASCAR stage. From qualifying for Carl Edwards in the XFINITY Series in 2006, seven Truck Series starts from ’06 to ’07 and five career victories in the NASCAR Pinty’s Series, Shepherd earned the experience of a lifetime.

What happened to him once the Roush chance faded away? Frontstretch strolled down memory lane with Shepherd to discuss his early years, his rise into the American NASCAR sector and what he’s up to today.

Zach Catanzareti, Frontstretch.com: Growing up in Canada, was racing a part of your childhood?

Pete Shepherd: It wouldn’t have been a part of most kid’s childhoods, but with mine it was. My grandfather Bill Zardo started racing in 1961, and my dad Pete Shepherd Jr. started in the early 1980s. I was one week old when I first attended a race.

Catanzareti: Who were some of your idols you watched race?

Shepherd: My family members (grandfather, father, mother and uncle), but outside of my family would be JR Hanley, Dale Earnhardt Sr. and Ernie Irvan.

Catanzareti: How did you start getting into racing?

Shepherd: I started racing when I was 10 years old in Go-Karts at Waterloo Regional Kart Club. My cousin Jake Collison got me started and right away I knew it would be something I would do most of my life.

Catanzareti: Racing in a number of divisions in stock car racing, lets start with your time in ARCA. You did 10 races from 2006 to 2009. You did your first start at Gateway and finished fourth. What was your nerves level at the time?

Shepherd: I put a lot of pressure on myself when I was younger. I was nervous, needless to say. I learned a lot in that race battling with Frank Kimmel. My most anxious moment was back in North Carolina the following Tuesday when I attended my first Roush Fenway Racing postrace meeting and Jack asked me how I thought I did.

Catanzareti: Your career quickly took a major uptick when you were signed with Jack Roush in the Truck Series. What was that process like? How did you get recognized by him?

Shepherd: I was in the CASCAR Super Series at the time for the late John Atto, and was selected to be one of 25 contestants on the Roush Racing Driver X Discovery Channel Reality Show. I finished in the final six, and was signed by Roush Fenway Racing immediately after the show.

Catanzareti: You made your debut at Memphis in 2006. At only 19 years old, were you ready for an opportunity like that?

Shepherd: No. The thing is, you can never pass up on an opportunity, because you never know if it will happen again. There are very few kids who are ready to make an impact at such a young age and it would have been better for me if I had more starts in ARCA to get used to the series and the competition.

Catanzareti: Erik Darnell was full-time that year. What did you learn from being alongside him?

Shepherd: Erik is a very calm and collected racecar driver. It seemed like nothing ever fazed him. He did most of his talking on the racetrack.

Catanzareti: What was your favorite moment with that team in Trucks?

Shepherd: I have two favorite moments. First was my debut in the No. 6 Scotts truck. We finished second in owner points. I got to work with Mike Beam as my crew chief as well as Mark Martin, who was very engaged with the team. He took every race he ever ran very seriously and that was a big turning point for me. I learned a lot from him.

Catanzareti: You tested with him in the XFINITY Series. Were you close to racing XFINITY around that time?

Shepherd: I never heard anything about me having the experience to race in XFINITY. But I did get to qualify the No. 60 car for Carl Edwards at Memphis.

Catanzareti: Why did that part-time relationship not last past 2007?

Shepherd: Lack of sponsorship and the economy overall. Roush Fenway Racing was cutting back the number of Trucks they were going to field.

Catanzareti: When you look back on that huge opportunity you got with one of the mega owners in NASCAR history, what are those memories like?

Shepherd: Definitely something I will never forget. Very few get to experience what I did, and I am very grateful for everything.

Catanzareti: Do you still follow the Truck Series today? Watch on TV?

Shepherd: I don’t follow it like I used to. The series itself has changed a lot. When I ran, you were battling drivers like [Ron] Hornaday, [Jack] Sprague, [Mike] Skinner, etc. Now it’s a series where a lot of rookies and younger racers battle.

Catanzareti: Do you aspire to get back in it one day?

Shepherd: Not at the same level, but I love racing cars and you never know what opportunities may come about.

Catanzareti: Since then, you dipped into the NASCAR Pinty’s Series in Canada. You’ve made 24 starts and won five races, some impressive success in part-time seasons. What was it that made you so fast in that series?

Shepherd: I was finally ready to race a car at a high level. I was more mature as a driver and person, and had more responsibilities. I had a lot of fun racing in this series. Our family owned the team, our longtime sponsor National Exhaust was back on board and it was a great experience to race across Canada.

Catanzareti: Do you think you would have been a champion if you made a full-time season?

Shepherd: Yes. The car was fast enough, our crew was prepared, and I was ready to run the full season if the opportunity presented itself. I see no reason why we couldn’t have won a lot of races and championships.

Catanzareti: Fast forward to now. What are you up to today?

Shepherd: I currently work at ECHO Power Equipment Canada as a sales supervisor, I have also started a company called Driven 4 Communications (www.driven4communications.com) where I can incorporate my marketing background and education mixed with my racing experiences to create websites, sponsorship proposals, hero cards and more for racecar drivers.

Catanzareti: With your company Driven 4 Communications, how are you able to still stay involved in racing?

Shepherd: I keep in contact with a lot of racecar drivers from across North America. It is rewarding to see others have success at any level even if I am a small part of it. I love assisting racecar drivers with their marketing efforts to ensure they have a successful race season and presence with their sponsors and fans. With Driven 4 Communications, it’s a win-win for our company, the racecar drivers and the sport overall!

Nice to see he mentioned Junior Hanley and Billy Zardo…two of the best!