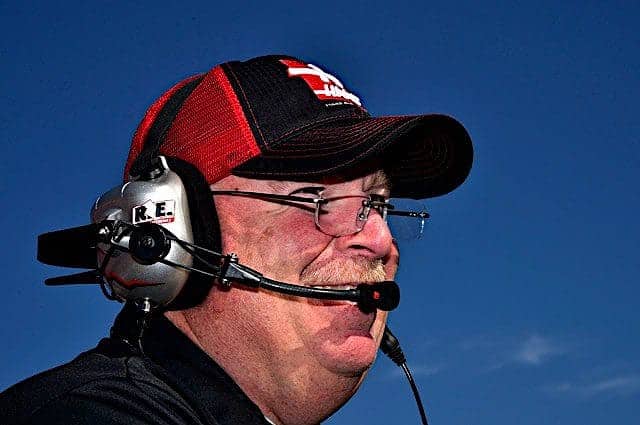 Teams do a lot of different things during an off-week. Tony Gibson, crew chief for Kurt Busch in the Monster Energy NASCAR Cup Series, went to the mountains of Tennessee and ran around for most of the week in side-by-sides. He was able to do that peacefully because his team is prepared for the next couple of races and has a Daytona 500 victory in its pocket.

He isn’t totally at ease, however, thanks to some less than stellar runs since then. That is what drives these teams to continue working, and Gibson has been through this grind for some 25-plus years.

In this week’s Tech Talk, he discusses vertical loads, bump stops, aero dynamics on the high banks of Bristol Motor Speedway and the transitions between the two. He also shares some poignant thoughts on his former driver, boss and dear friend, Alan Kulwicki, who lost his life at this track shortly after winning the title in 1992.

Mike Neff – I’d ask where you’ve been, but I’m sure you were camping and riding four-wheelers somewhere.

Tony Gibson – Yeah, we did. We went to a place called Ride Royal Blue in Tennessee. Took our side-by-sides up there and had a really good time. We stayed for about four or five days and had a nice, relaxing time. The weather was good, so it was just nice to get away for a little bit.

Neff – From a car preparation point, were you ahead enough in your preparation in anticipation of the upcoming races, or are you still playing catch-up from some of your car damage you’ve received this year?

Gibson – No, we’ve been on schedule car-wise. We’re still doing parts and pieces and things like that. Like truck arms and housings that we were a little bit behind on. We’re not bad at all. Our Richmond [International Raceway] cars are probably 80 percent done before we left yesterday. We’re not too bad. We’re trying to stay two weeks out when we can. Sometimes that gets pushed a little bit closer, but it is getting better and better as we go.

Neff – What do you feel like you’ve learned in the first seven races of the year?

Gibson – We’ve all learned, as a company, that we’re not as strong as we need to be, for sure. The downforce package has hurt us a little bit more, the No. 41 team.

…It is just the bumps in the road we all knew we were going to have going into this deal with the switch over with Ford. We knew it was going to be a little bit of a struggle so you have to be ready for that and not panic. Work on things a little bit at a time. I think that has been our approach, and I think we’re doing pretty good. I think we’ll get stronger as we go, and that is what we want to do.

Usually, the No. 41 is really fast the first three quarters of the season and then we seem to struggle in the Chase. Hopefully we can start out a little slower here and then come on really strong in the Chase. … I think everything is going to plan; I don’t think it is too bad anyway.

Neff – Has the segment racing and the bonus of playoff points changed how you’re calling races this year?

Gibson – It does. … We missed out on a couple of races there with the alternator problems where we didn’t get a chance at any bonus points. It changes how aggressive you are the first part of the race, top 10-wise. It determines how you want to pit, whether you stay out to grab a few extra points, which puts you behind the next segment. You have to pick and choose your battles. You see everybody being more aggressive at the beginning of these races to grab those points.

Neff – On a high-banked, half-mile track like Bristol, is the new aero package going to have any impact at all?

Gibson – Sure it will. Anytime you’re running over 100 mph, aero comes into play. Especially there you’re carrying a lot of speed and the car kind of drops off of the straight into the banking. The side-force and rear downforce, with the smaller blade on the back, will definitely play a little bit of a role in how the cars handle for sure. Not as much as a mile-and-a-half track, but it will be more than what it was at Martinsville [Speedway] for sure.

Neff – At what point does the vertical load on the car, as you hit into that extreme banking, take over and compensate for what you’ve lost on the downforce side?

Gibson – It changes a lot. You really need the banking to catch the car and press all four tires into the ground and load up all of your bump stops and things to really help the car drive well. It is that one little zone, where the car is unloaded and feels really light, that the aero comes into play, because you don’t have that mechanical grip to hold the car anymore. You rely on the aero to hold the car until the banking catches you.

It is a little bit of a task at a place like Bristol, and Dover [International Speedway] will be the same way, although it will be a huge delta there because you’re running so much faster, because the car gets light and there is nothing to compress it the aero takes over, and you’re leaning on it to get you to that point. So it can be a little bit of a struggle.

Gibson – It is quite a bit different because you’re turning a tighter radius. Any time you do that, the car is compressed more. It has more load in the steering and the front tires and the whole car compresses more. When you run on the high side, you don’t run in as fast because you have to lift early, but you’re getting back to the gas a whole lot quicker.

Neff – When you set up your bump stops and shocks and what have you at Bristol, based on the feel your driver wants, do you use stiffer bump stops than you do on higher speed tracks because of the vertical load, or is it softer so that it can compress even more?

Neff – A lot of fans don’t realize the kind of force that goes through the cars when they go through those corners. Do you see loads that high anywhere besides Dover and Bristol?

Gibson – We see loads like that a place like Las Vegas [Motor Speedway]. We see a lot of load getting into one at Charlotte. Dover and Las Vegas are probably our two highest load racetracks.

Neff – At Bristol you enter the pits at different places for green flag and yellow flag pit stops. Do you have someone responsible to remind Busch that during the race or is it up to him and the spotter to remember that?

Gibson – Tony Raines is our spotter and it is on his deal. He makes a note and I do as well. I remind him when it is going to be a green flag stop. I remind the spotter and then he reminds Kurt when it is time to go. There are two of us that work together to make sure Kurt has all of the information he needs, especially at a place like Bristol.

Neff – Are you excited or cautious about a different choice in tire compounds during the race?

Gibson – I think it is pretty cool. I think the key is, will NASCAR and/or Goodyear give us tires to practice on, and how that is going to work? How fast is the tire going to be? If the tire is just a couple tenths quicker, I’ll take the track position over the tires to get clean air. If it is half of a second or even four tenths quicker, you’re definitely going to want the tires.

It will be interesting to see how guys play that and what they do. I am just curious to see how much faster that tire is than the one we run on, and we won’t know that for sure until we run on it.

Neff – You said on Sirius the other day that you haven’t won a race at Bristol since Alan Kulwicki passed away. Not sure how many fans realize you had a close connection with him. Would you mind explaining the connection you had with Alan and what it would mean to win Bristol since you haven’t done it in over 20 years?

Gibson – We were really close friends. We built a relationship outside of the racetrack and the shop. He was one of my closest friends at the time. That racetrack in particular meant a lot to us, to go there and Rockingham [Speedway] and Phoenix. Those places were something special.

We’d won a ton of races with Alan at Bristol. It was a track we always looked forward to going to. He got killed there, and it is just one of those things that is scarred into your memory forever. Driving out of that racetrack on Friday morning in the pouring rain. Knowing you’d just lost your best friend and owner and driver and everything you’ve got. It is a pretty lonely feeling for all of us.

Every time I go into that place I think about Alan and the good times and the bad times also. It is special for me. The Daytona 500 was awesome for me because it is my home track. To finally win as a crew chief there was obviously emotional for me, and it would be the same to win Bristol. All of the emotions would come out with all of the times we spent there with Alan.

What is it that Mike Neff doesn’t do? The writer, radio contributor and racetrack announcer coordinates the site’s local short track coverage, hitting up Saturday Night Specials across the country while tracking the sport’s future racing stars. The writer for our signature Cup post-race column, Thinkin’ Out Loud (Mondays) also sits down with Cup crew chiefs to talk shop every Friday with Tech Talk. Mike announces several shows each year for the Good Guys Rod and Custom Association. He also pops up everywhere from PRN Pit Reporters and the Press Box with Alan Smothers to SIRIUS XM Radio. He has announced at tracks all over the Southeast, starting at Millbridge Speedway. He's also announced at East Lincoln Speedway, Concord Speedway, Tri-County Speedway, Caraway Speedway, and Charlotte Motor Speedway.
@MNeffShortTrack
Previous NASCAR 101: The 10 Oldest Drivers on the NASCAR Circuit
Next Friday Faceoff: Which Rookie Is Top of the Class?