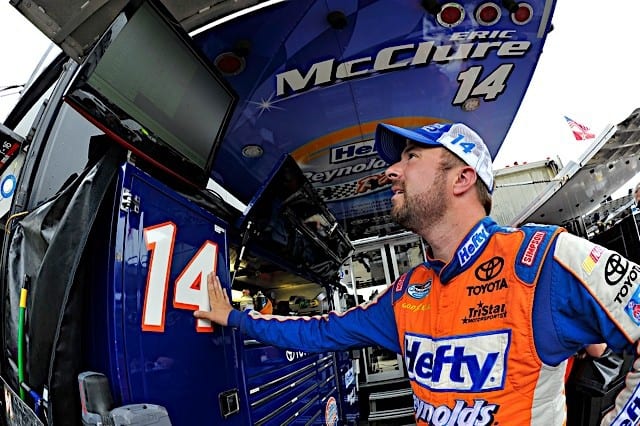 It’s been more than a year since Eric McClure has taken the green flag in the NASCAR XFINITY Series. And you don’t have to remind him.

“There are days I miss it terribly,” McClure said with a sigh.

Following a career that spanned 14 years and 288 career starts, McClure is in an unfamiliar position in 2017: sitting on the sidelines. The Virginia native, who turned 38 in December, made his most recent XFINITY start at Daytona International Speedway in February 2016, with JD Motorsports and has since spent Saturday afternoons away from the series.

He hasn’t been completely out of racing, however, as he’s spending most of this time pursuing success with his co-owned Martin-McClure Racing team in the NASCAR K&N Pro Series East. In fact, 2017 will see their first full-time effort to compete for the series championship with 2016 Rookie of the Year, Hunter Baize.

Yet, like most racers, McClure hasn’t kept driving far off his radar.

“I don’t want to ever close the door because once you have something, it’s hard to let go,” McClure said. “But at this time, I love what we’re doing. I don’t have any plans to do it but the desire is still there very strong on some days and if it catches me on the right day, you never know.”

That desire may have even been enough to put McClure back in an XFINITY car for 2017.

“I will tell you this: I’ve had opportunities that I have not taken because of our efforts with this deal,” he said of his commitment to MMR. “There are some situations you have to weigh out at home, you have to determine… when is the right time?

“Honestly, at my age, this is my future if I’m going to stay in the industry. It has satisfied that competitive drive and it’s fun coming to the racetrack knowing you have a chance to run up front.”

Though McClure never had the equipment to steer himself in a NASCAR Victory Lane, keeping the focus on the quality of their rides is just what he does now with MMR, where he handles day-to-day operations alongside fellow ex-XFINITY racer Hal Martin. In 2016, they took three victories in 10 races and have already captured two top-10 finishes in 2017’s young season. For McClure, his drive to succeed in NASCAR now comes in the form of Martin-McClure Racing and their blossoming talent.

“It’s been great to build what we’re doing and try to stay viable,” he said. “I’m almost 40 years old so I’ve had my career. I’m not going to be the guy who comes back and runs full time. So, to be able to do this, bring young people in (young drivers, young PR people, mechanics) and see the success they can have, that’s become a great joy.

“I still go play with our road racecars a little bit to scratch the itch when I need to. I’m starting to look myself in the mirror and see an owner instead of a driver and I don’t think that’s a bad thing. I’m having a good time.”