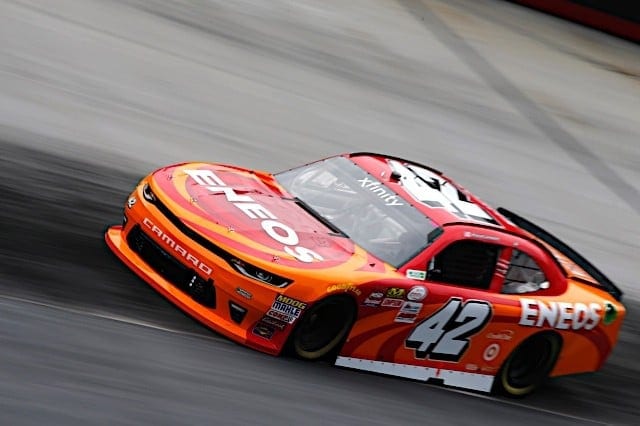 With a track-record speed of 127.988 mph, Kyle Larson will start from pole in Saturday’s Fitzgerald Glider Kits 300 from Bristol Motor Speedway.

“Happy to get the pole here,” Larson said. “Hopefully get race in today, the forecast looks bad but it’s not raining.”

Larson has put effort toward working in the top lane, leaving the popular inside groove, to search for better passing opportunities. Starting from pole, however, wont help Larson’s goal.

“When you run so many laps on bottom, it takes long time for top to pick up,” he said. “Hopefully when the race starts, guys in the mind-pack work their way up.”

Ross Chastain was the surprise of the session, running as high as second quickest in Round 1 and advancing all the way to the fast dozen. The JD Motorsports driver starts from the 11th spot.

“If your car will turn, it’ll still go fast,” he said. “Here, definitely. All our lap times were within a tenth. We worked on some more long-run stuff, hopefully rain holds off.”

Point leader Elliott Sadler struggled in the session, lining up 17th, two spots ahead of his JR Motorsports teammate and runner-up in points William Byron in 19th.