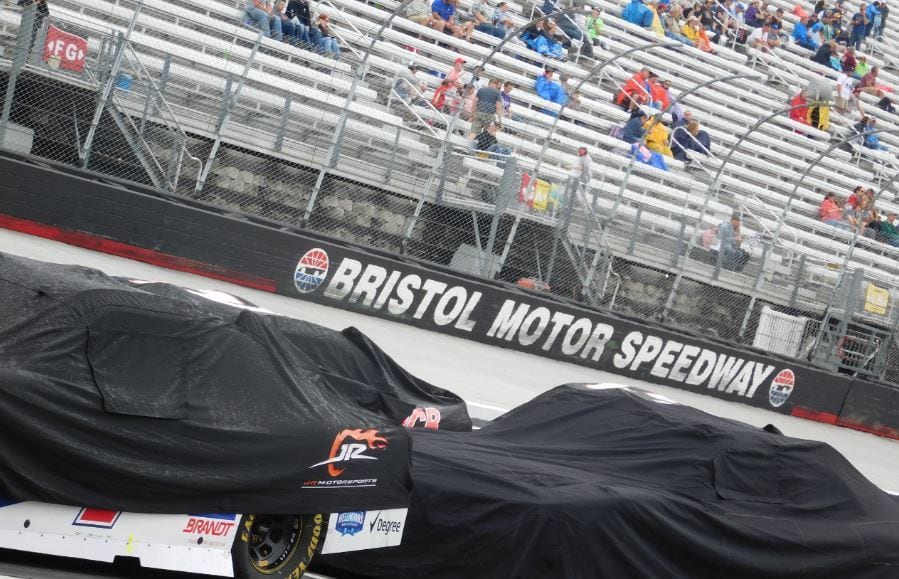 Monster Energy NASCAR Cup Series: And then it was Monday – In a sport that halts its action at the lightest of rainfall, Sunday’s Food City 500 at Bristol Motor Speedway was simply doomed.

Dropping buckets of water from the get-go, NASCAR wasted no time to cancel the day’s activities, pushing the Monster Energy NASCAR Cup Series race to Monday at 1 p.m. ET.

With a far better forecast on tap for Monday, the question of racing comes to the top.

Coming into the Thunder Valley, VHT and grip were the talks of the town. With a heavy layer of the black substance draped over the inside groove, Friday’s practice sessions, for all three series, proved its worth. It made the high side more dangerous than Texas Motor Speedway’s second groove.

But it seemed to change once the first race of the weekend began on Saturday. It was pole-sitter Kyle Larson who lived up to his promise to bring the outside lane back into the mix. By the end of Stage 1 on Lap 85, Larson was flying, lapping up to ninth-place Daniel Hemric while dominating each end of the circuit.

So Monday’s Cup race will see a fresh face of pavement. The question of racing grooves will certainly continue. – Zach Catanzareti

XFINITY Series: Erik Jones Comes From Behind to Win – On Lap 230, Erik Jones made what at the time looked to be a costly mistake, speeding on pit road. This ultimately eliminated him at a chance for a second consecutive victory in Bristol’s Spring XFINITY Series race, right?

In the final 50 laps of the 300-lap event, the race was halted four times due to caution, ever so slightly allowing Jones to creep his way to the front. And with a restart with 21 laps to go, the No. 20 car found himself sitting on the outside line of the second row.

Jones used the ole chrome horn to get around Ryan Blaney with 20 laps to go. The 20-year-old went on to lead the remaining laps in the race, even after a caution came out with nine laps to go when JR Motorsports teammates William Byron and Justin Allgaier got together.

The victory is Jones’ second on the season, and he is the first repeat winner in the series this season. Hemric on the other hand ended the day $100,000 richer, as he was the highest eligible Dash 4 Cash driver in the finishing order, in a career-best fifth. – Dustin Albino

Bentley Team M-Sport’s Guy Smith tried to make an aggressive move on the start and nudged outside pole sitter Ezequiel Perez Companc (No. 19 GRT Grasser Racing Team Lamborghini) into the grass.  Naturally, the grass is a very low grip for those on slick tires.  Perez Companc spun in front of the whole field, causing much of the 50-car starting field to scatter.  Eventually, the contact was made and damaged cars ended up all over the place.

With cars strewn all over the place, the red flag was thrown so that the track crews could clean up the track and get to the disabled cars.  Over a dozen cars were involved in the crash and ten of them ended up disabled and unable to continue.  Those eliminated included the aforementioned No. 19 of Perez Companc, the factory No. 23 Nissan and Black Falcon’s No. 15 Mercedes, driven by defending Pirelli World Challenge GTS Champion Brett Sandberg, part-time XFINITY Series racer Scott Heckert and Dore Chaponick.

GRT Grasser Racing Team’s No. 63 Lamborghini Huracan GT3 of Lamborghini factory racers Mirko Bortolotti, Andrea Caldarelli and Christian Engelhart claimed overall victory by 29.360 seconds over the No. 50 AF Corse Ferrari 488 GT3.  Round No. 2 of the Blancpain GT Series Endurance Cup is scheduled for May 14 at Silverstone. – Phil Allaway

While Penske teammate Will Power dominated the race, leading 60 of 90 laps, it was Newgarden who earned the triumph. The No. 2 car captured the lead with 14 laps remaining in the contest, solidifying his place at Team Penske early in the season. – Joseph Wolkin

NHRA: Three Times As Nice for Pritchett – Winning is getting to be a habit for Leah Prtichett, as she notched her third victory in five races this season at the NHRA SpringNationals this weekend. Pritchett faced off against Steve Torrence, and technically her husband, Gary Pritchett, who works on Torrence’s team, in the finals.

Pritchett laid down a run of 3.781 seconds at 321.96 mph to defeat Torrence’s 3.787 at 322.11 to score her fourth career victory and third of the season. She also defeated Scott Palmer, Doug Kalitta, and Antron Brown in earlier rounds.

“Our goal was to leave as the points leader and that was not easy at all,” Pritchett said. “Going into the final we said this our bounce back and we’re going to keep it interesting. Never been in a position to really be counting points and I know it is early in the season, but I’m definitely enjoying that.”

Ron Capps took the Funny Car victory in dramatic fashion, crossing the finish line in a ball of fire as his engine exploded on the way to a 4.004 pass at 284.33 mph to defeat Robert Hight who also experienced engine problems and crossed the center line.

In Pro Stock, after finishing runner-up seven times, Bo Butner finally put it all together and won his first race in the class, although competitor Jeg Coughlin, Jr. didn’t make it easy on him. Butner and Coughlin left the starting line with identical reaction times, but Butner’s 6.550 second, 212.26 mph pass was good enough to beat Coughlin’s 6.562 at 212.03 mph.

“Any win that you stand on that stage, Super Stock, Super Street or whatever it is (the feeling) never gets old,” said Butner. “It’s a great feeling and you can’t explain it unless you experience it. To make four consecutive win lights is very tough and a lot harder than I expected.”