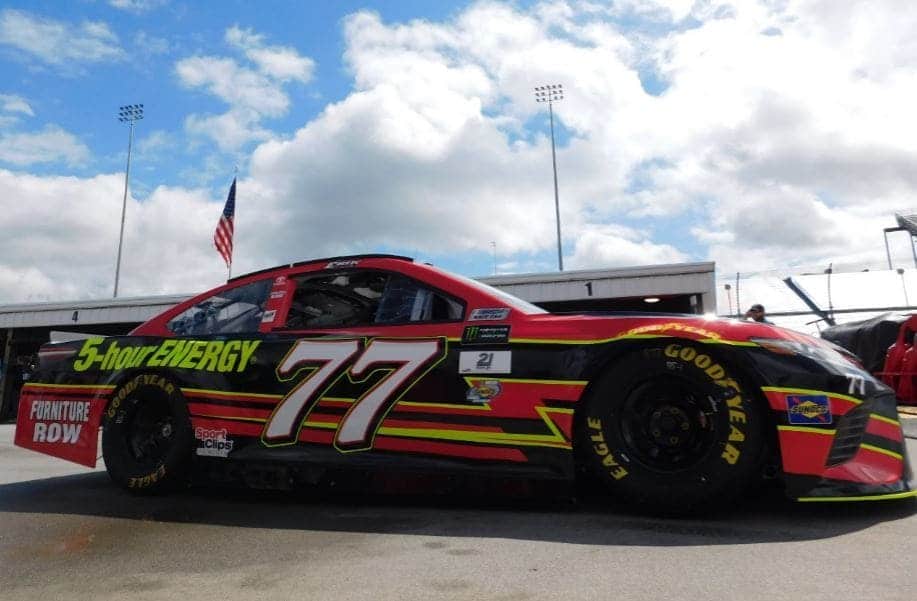 Erik Jones has not missed a beat during his rookie season in the Monster Energy NASCAR Cup Series thus far. Piloting the brand-new second car for Furniture Row Racing, Jones got collected in an accident at Daytona International Speedway that was not of his making.

Since then, the No. 77 team is climbing through the standings.  Going into Monday’s rain-delayed race at Bristol Motor Speedway, Jones is 14th and currently in position to make the playoffs.

Since Daytona, consistency has been the name of the game for Jones.  Although he has posted only one top-10 finish in 2017, he has four other results in the top 15.  The Michigan native may not be challenging for wins and leading laps like his Furniture Row Racing teammate Martin Truex Jr., but he has shown more speed week-to-week than many of his pseudo-teammates at Joe Gibbs Racing.

This weekend, the No. 77 team has already flexed a lot of muscle.  Jones posted the fastest single-lap speed in Friday’s MENCS practice, while placing second and sixth in the second and final practices respectively.  He also won Saturday’s XFINITY race for JGR, claiming his second victory in a row in the peliminary series.  Given his knack for getting around Bristol, Jones could be a good sleeper pick to earn his first Cup Series win.

In fact, the chatter about when Jones will get win number one in NASCAR’s top division is only going to pick up as the 2017 season goes on.

The amount of attention on Jones will depend on three factors: how much speed the No. 77 team continues to show, how soon Chase Elliott and Ryan Blaney win, and if Jones stays near the playoff bubble over the long term.

One year ago, Elliott and Blaney were in Jones’ shoes.

The two rookies had already been labeled as future NASCAR stars, and many wondered if they could be instant successes in the Cup Series.  Jones’ situation is probably more similar to Blaney’s.  Both drivers are under contract with two of NASCAR’s powerhouse organizations, but are currently competing with satellite teams.  Moreover, Blaney was steady enough to stay in the Chase conversation for much of 2016, even though he was not regularly challenging for wins.

Blaney ultimately missed the Chase, while Elliott made it and advanced to the second round, but neither driver won a Cup Series race in their first full-time season.

In 2017, Blaney and the Wood Brothers have found plenty of speed.  He ran the finest race of his MENCS career at Texas Motor Speedway two weeks ago, but late-race problems on pit road and getting stuck back in traffic foiled his bid for the victory.

Elliott has been impressive this year as well.  The No. 24 team led the closing laps of the Daytona 500 before running out of fuel, relegating Elliott to 14th place.  However, that remains Elliott’s worst finish of the season thus far.  He is currently second in points, on the strength of five top 10 finishes.

Blaney and Elliott have challenged the notion of the sophomore slump.  It seems to be only a matter of weeks until they both reach victory lane for the first time.  Once they do, the conversation will shift to Jones and how quickly he will join Blaney and Elliott as a MENCS winner.

Maybe it is not fair to constantly try to predict when young drivers will win their first races.  Jones’ Cup Series career is only 10 races old.  It is uncommon for a driver to win that quickly in NASCAR’s top division, even for drivers who go on to become legends.

However, “when will Jones win” will probably become a big topic of conversation later in the year, especially if Jones’ finishes correspond more with Blaney’s 2016 numbers than Elliott’s.  Neither driver was at the top of their game during the late summer last year, but Elliott had built up enough of a points cushion over the Chase cutoff that made reaching the postseason easier for the No. 24 team.  Blaney, however, had to play from behind for most of the season.  The No. 21 team was eventually in a situation where only a win would do, and the win never came.  In fact, Blaney got overshadowed by Chris Buescher, another rookie, who pulled off a surprise victory at Pocono Raceway and advanced to the Chase.

Jones could easily wind up in a similar situation to Blaney, needing a win to reach the playoffs.  Additionally, somebody below Jones in points could steal a win like Buescher did, making Jones’ path to the playoffs even harder.  Jones’ entire season could be judged on whether or not he wins and punches his ticket to the postseason.  That kind of judgement really is not fair to Jones or FRR, but that is the reality of NASCAR in 2017.  It would be very difficult to argue that Buescher had a better season than Blaney last year.  Buescher had only two top 10s to Blaney’s nine, and an average finish of 26.1 compared to 18.5 for Blaney.  However, Buescher got the accolades at the end of the year due to the singular shining moment of winning at Pocono.  Neither Blaney nor Elliott had any such moment.

Jones’ first win might come as soon as Monday, or it may not come at all in 2017.  Yet Jones’ pursuit of that win will probably be the defining story of his season.  Of course, if he continues to take after Blaney and Elliott into his second year, 2018 could be a very good season for Jones.