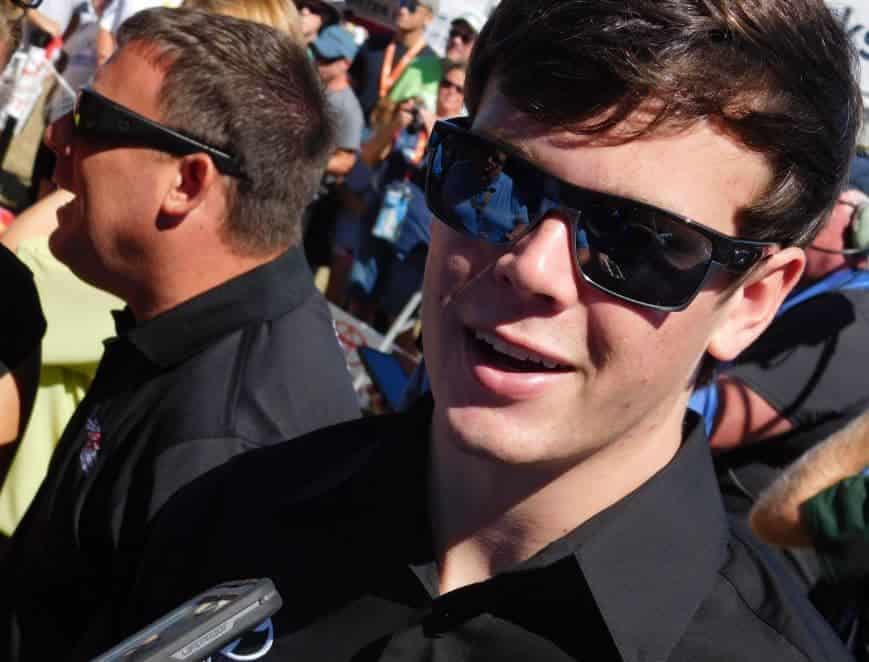 On Lap 230, Erik Jones thought he saw his chances of repeating the Spring race at Bristol Motor Speedway go away. The No. 20 car was caught speeding on pit road and had to  re-start from the back with a dominating Kyle Larson out front.

Over the last 70 circuits, there were five caution flags, enabling Jones to get back to the top five. Then, on a restart with 21 laps to go, the Michigan native restarted in fourth, and within a lap saw himself in the lead after giving the ol’ chrome horn to Ryan Blaney.

Jones went on to lead the final 20 laps, leading the field for 26 total laps during the afternoon.

“We were racing hard and held onto it from there,” Jones told Fox Sports in Victory Lane. “It was a little similar to last year. We didn’t really know if we had a winning car or not, and to come back from the pit road penalty like that, especially with not much green flag racing was a lot of fun. It’s a race I won’t forget for a long time.”

The victory put Jones’ name in the record book as the first repeat winner of 2017 in the XFINITY Series. It marks the second straight race in which he has picked up his second-career victory at a track, also doing it at Texas Motor Speedway before the Easter break.

Two lanes of racing is back at Bristol, baby! Overall, the racing in the XFINITY Series was among the best the series has seen all season long. Some may say it was because Kyle Busch wasn’t in the field at a place he typically dominates, but cars were all over the race track.

The fear going into the race was that it might be the old Bristol that saw racing be a one-lane, groove around the bottom of the track. Not today.

Per usual, Larson was the first one to venture to the outside, and he mowed through the field in the opening stage, lapping all the way up to eighth position. Not far behind were drivers such as Jones and Ty Dillon attempting to use the top, making quality passes, all finishing in the top five in the opening stage.

In recent years, the groove right next to the wall has been the preferred lane on the track at Bristol. Now, there is two lanes that work, and that is something that has been lacking in Thunder Valley for the past few years.

Going into the race, drivers, teams and fans knew about the predicted weather forecast, and it wasn’t good. Unfortunately, there was an hour and 38 minute rain delay that came with eight laps to go in the second stage.

The intensity within the race was picked up because the weather could hit at any time during the middle of the race. Once the second stage is complete, the race is deemed official.

This race looked a bit like the Cup Series race at Talladega last May, when rain could hit again at any moment, though it never did. The racing was intense, so much so that it caused three airborne crashes. Thankfully, there was none of that on Saturday, but there was a lot of crashes, partially due to the weather forecast.

Some could argue that it’s a good thing, but it led to a bunch of long cautions. Darrell Wallace Jr. spun Brendan Gaughan out with 57 laps to go. This caution was extended 16 laps, before the green flag would wave again, which was way too long.  There were other instances in which the pace car was pacing the field for too long, and it’s been a theme of the season thus far, long cautions.

During the one hour and 38 minute red flag, Ross Chastain and Jeremy Clements, two XFINITY Series regulars got into a bit of a scuffle on pit road.

Allegedly, Clements went over to Chastain after the drivers got out of their respective cars and put his hands on Chastain’s shoulders. When the driver of the No. 4 felt as though he was pushed, he turned around, saw who it was and swung.

It all started during the race when Chastain got into Clements going into Turn One, pushing the No. 51 car up the track. The No. 4 car pulled away.

Under the caution, which proceeded to the stopping of the race due to rain, Clements found himself bumping Chastain in the rear. From there it was on.

“With our two teams, we run together every week, nose-to-tail, one in front of the other” Chastain said. “We’ve run into each other for three years now. Had a bunch of stuff off the track happen, and I’ve been good with it. I feel like like I’ve been the bigger man in a lot of cases.”

The two underfunded teams both started in the top 15, Clements ended up getting the better of Chastain in the finishing order (17th to 31st) when the No. 4 car wrecked with 30 laps to go.

Houff began the 300-lap race from 21st, going a lap down in the opening stage of the event. However, he, Gaughan, Brandon Jones and Blake Koch all took the wave around at the end of the stage, hoping for an early caution in the second stage.

That caution came with 51 laps to go in the stage when Ray Black Jr. got into the wall. Houff remained on the lead lap, as there were only 13 cars on the same lap as the leader.

On the restart with 21 laps to go, Houff restarted in 10th, falling to 15th in the final laps of the race. It was the teams second career top-15 finish in 12 career starts, as Brandon Gdovic finished 13th at Watkins Glen International.

Much like most of the 2017 XFINITY Series season, Cup Series drivers dominated the event. Daniel Hemric and Brandon Jones were the only non-Cup drivers to lead the race, totaling 13 combined laps.

Larson put on a show in the first stage, leading all but eight laps, en route to the stage victory. He came home seventh after having to make an unscheduled pit stop under caution late in the race.

Five of the top seven in the finishing order are Cup Series regulars. Daniel Suarez came home third after leading earlier in the race. The Dillon brothers finished seventh (Ty) and 13th (Austin).

Cup Series drivers have won five of the seven XFINITY Series races in 2017.

“We’ve worked hard to get our cars better here at JGR and it’s really paid off the last two weeks.” – Erik Jones

“It seemed like I was sitting there for forever, but some guys don’t have brakes I guess.  It’s just an unfortunate day.  I guess everybody I ran over this is my karma.  I was just fighting hard for the lucky dog.” – Darrell Wallace Jr.

“I think I sprained my wrist.  I don’t think it’s broken.  I blew a tire there getting into one and it happened so fast that I didn’t have time to release the wheel and when it did I think it just was pretty violent.” – Ryan Reed

Bristol has always been one of the best tracks on the NASCAR circuit, specifically for the XFINITY Series. Look at last year’s races that featured  the hard battle between Larson and Jones at the end of the race and in the summer, Austin Dillon wound up on top, after Brad Keselowski and Kyle Busch had an incident late in the race. And those races were with mainly just the upper groove working.

In Saturday’s event, both lines were race-able. It led to great racing throughout the day, and the typical carnage that happens at Bristol.

This race was quite a spectacle.

The XFINITY Series heads to Richmond International Raceway next week, the latter of back-to-back short track races. Dale Earnhardt Jr. is the defending winner of the event, though he is not scheduled for the Spring Richmond race this season. NASCAR’s Most Popular Driver will be in the No. 88 XFINITY car at Richmond in September.