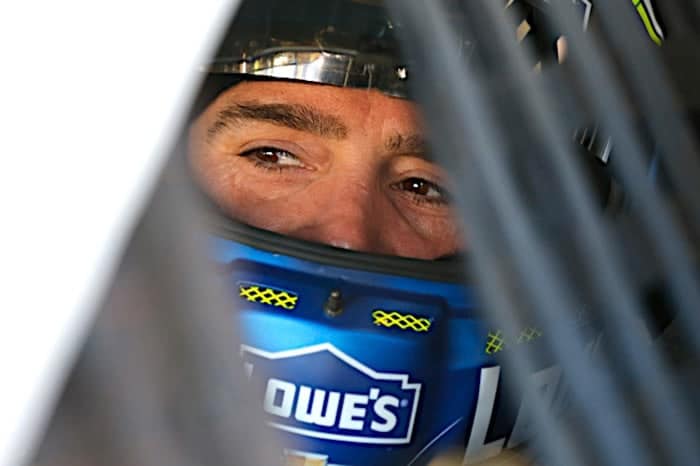 Kyle Larson and Martin Truex Jr. may have led the most laps at Monday’s Food City 500, but it was Jimmie Johnson’s day again in 2017.

Breaking through the tight battle in the top five, Johnson beat Clint Bowyer to the line to win the Food City 500 at Bristol Motor Speedway. The win is his second straight in 2017 and first at Bristol since 2010.

“Execution has been flawless,” Johnson said after his 82nd Cup win. “Great racecars. I felt like we did a nice job on Saturday on getting through my frustrations. A lot of fun. There was so many competitive passes and racing at the end. I didn’t have to worry about Clint.”

Bowyer, who found himself in second, tried and tried to catch the seven-time champion for the win but came up 1.199 seconds short of breaking a winless streak of more than four years.

“You’re adjusting everything you can possibly adjust,” he said. “From your trackbar, adjusting your line. I would gain on him one lap, he would gain on the next. You kind of realized it was a second-place day.”

Stewart-Haas Racing teammate Kevin Harvick played strategy by staying out of pit road during a late-race caution. The move gave the No. 4 the lead and a third-place finish. Matt Kenseth finished fourth with Joey Logano completing the top five.

Larson owned the first half of the event, leading the opening 201 laps before losing the lead to Truex. After keeping touch in the top five all day, a pit road speeding penalty sent the No. 42 to the rear.

“It’s a lot of fun to be contending every week,” Larson said. “It drove fine, just on four tires, those guys could work the bottom like I couldn’t. I was hoping for a top five but I got messed up in traffic. I think they have something good with the VHT on the bottom. I hope they don’t do anything more to mess the top up any.”

The 500-lapper saw numerous contenders and multiple types of racing throughout the rain-postponed event. Though the inside lane was strong, the outside groove came in quick, with Larson, Ricky Stenhouse Jr., Brad Keselowski and others working it in.

Though it ended up working out well for these drivers, the day was sour for many others. Erik Jones had his best race to date in his Monster Energy NASCAR Cup career, running as high as third on the day in his No. 77. The run came to a close when a late crash put him back to 17th spot. His teammate also found some problems, speeding on the race’s final pit stops. Leading 116 laps on the day, Truex managed an eighth-place finish.

“I wish we could’ve raced until the end but that’s how racing goes,” Truex said. “We haven’t had a whole lot of speeding penalties in the last couple years. It’s just bad timing to get one today.”

Dale Earnhardt Jr. suffered his fourth finish outside the top 30 when an oil system failure sent him into the wall and out of the race. Danica Patrick, Kasey Kahne, Brad Keselowski and Kyle Busch were among other big names with significant issues on the day.

Busch was frustrated with Goodyear after blowing two tires for the second straight year at Bristol.