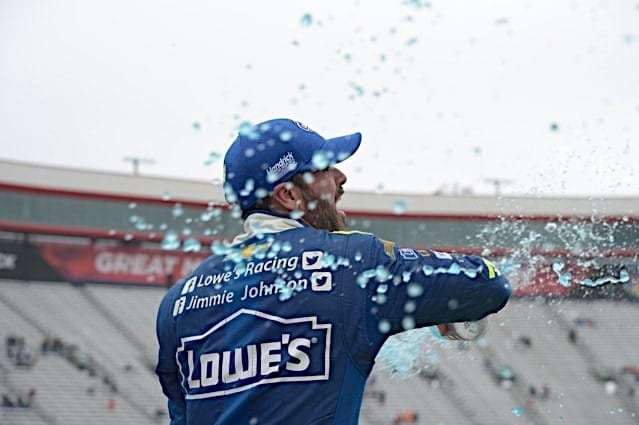 With an 82nd victory in the Monster Energy NASCAR Cup Series, the question returns: Who will he catch next? That being on the sport’s all-time wins list, where Johnson sits seventh, only one win behind his childhood idol Cale Yarborough.

“I remember being 7 or 8 years old traveling across the country racing dirt bikes,” Johnson said. “I walked into my first Hardee’s [restaurant, Yarborough’s race sponsor] thinking it was a race shop for Cale Yarborough. And then I realized it was a hamburger stand.”

With a focus on dirt bikes as a kid, Johnson had a lot to learn about NASCAR.

“There is no way — I mean, I didn’t even really pay attention to NASCAR,” he said of his early years. “I had no idea what it was. All my heroes were on two wheels.”

Since then, the California kid has come a long way, earning seven championships and chasing an eighth after winning the last two races this season.

The 41-year-old credits his stable team as a prime reason for his success. Seventeen years with one team, one car owner and one crew chief has made the most successful group in the modern era of the sport.

“To be in this position is quite an honor,” Johnson said. “I honestly wouldn’t be in this position if it weren’t for Chad Knaus, Rick Hendrick, Jeff Gordon, Lowe’s, all the consistent things I’ve had in my career. This has really been the environment for me to thrive in.

“I don’t know how many different teams Cale drove for, [Dale] Earnhardt drove for a couple, I think Cale moved around some. D.W. (Darrell Waltrip) is right ahead of us, he moved around. There are different environments that work for different people. For myself, this has been the only environment for me to succeed in.”

With Yarborough one ahead, two more Hall of Famers in Waltrip and Bobby Allison sit at 84. As most would expect Johnson to top those men by the end of his career, the real question is if the No. 48 can hit 100 wins.

“I don’t think 100 is achievable,” Johnson admitted. “I hope I’m wrong. I would love to clearly do that. I have always felt that that is such a big number. With as competitive as our sport is, the new twist of stage racing and what it’s done to our series, that’s going to be a hard number to get to.”

Only 23 more to catch Pearson.

If he drove the car like it was capable of he’d have 120 wins at least. One of his flaws. Imagine Cale in the car!