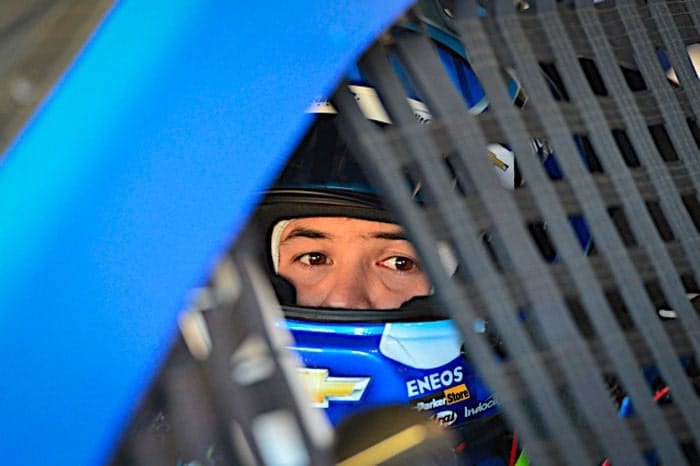 During the first 300 laps at Bristol Motor Speedway, not a single Monster Energy NASCAR Cup Series driver got busted for speeding. The pits were so tame, the only major incident was a commitment line violation by rookie Gray Gaulding. If that name’s your front page headline, after answering the obvious question of “Who’s that?” it’s clear no cops were busy on pit road.

But in the end? Turns out they were all saving tickets for the fourth quarter.

Call it nerves, freak timing or drivers getting greedy, but pit road speeding crippled top contenders over Bristol’s final 200 laps. A total of eight drivers got busted, and among them were the two best drivers all day, Kyle Larson and Martin Truex Jr. Both wound up with disappointing finishes, forfeiting their trophy match to watch a 1-2 slugfest between Jimmie Johnson and Kevin Harvick instead.

Clint Bowyer and Matt Kenseth fared a bit better; both got their penalties early enough to maneuver through traffic and cruise through to top-five finishes. But Sunday proved a reminder it’s not just the on-track action that can bite you. It’s the second time in eight races (Atlanta Motor Speedway, anyone?) speeding became a major racing storyline, a 25 percent clip that leaves it likely to rear its ugly head in the playoffs.

Kyle, Kyle, Kyle. Does 2017, the scene of your breakout performance in NASCAR, love you, or does it love you not?

It loves you. You’re leading the point standings, have earned five top-five finishes and started three of the last four races from the pole.

It loves you not. Four of those runs are second-place finishes. For a guy who could be dominating the series right now that’s a whole lot of missed opportunities.

It loves you. Bristol was your playground this weekend. You led 382 of 800 laps, dominating long stretches of both the XFINITY and Cup races.

It loves you not. You came up empty-handed in those races, twice. The aforementioned speeding penalty killed your Cup effort, while in XFINITY Erik Jones had the better-handling car when it mattered.

It loves you. You’re the most consistent Chevrolet, producing the best season for Chip Ganassi Racing since Jamie McMurray gave up his journeyman gig for one-hit wonder status back in 2010.

It loves you not. Those same Chevrolets come with a great deal of assistance from Hendrick Motorsports. You know who’s killing it at Hendrick right now? One of your likely championship opponents, Jimmie Johnson. Are you destined to fall behind the No. 48 team come playoff time?

Johnson, per usual, has put it together just as the media had him dead and buried. He’s won back-to-back races for the first time since 2014 and surged to sixth in the standings. The fact he did it at Bristol, a track that typically uses Johnson’s car as a battering ram makes the victory that much sweeter.

Further back, Chase Elliott failed to lead a lap from the front row but gained valuable Bristol experience. The sophomore wound up a solid seventh, sits second in the standings and hasn’t run outside the top 15 all year.

Now compare those drivers with their partners (Hendrick has two main shops, the 48/88 and the 5/24). Dale Earnhardt Jr. broke an oil cooler, bashed into the Bristol wall and wound up 38th. It’s his third crash in eight starts, not exactly what the doctor prescribed when recovering from post-concussion syndrome. He’s nowhere to be found inside the top 20 in points, and you wonder if NASCAR’s Most Popular Driver will need to win a superspeedway to make the playoffs.

And Kasey Kahne? A late-race wreck killed any hopes of a Bristol bounce back. He’s on the outside of the playoffs looking in – again – and lacks much of the speed teammate Elliott sprints out of the shop with each week. Can the No. 5 team get it together? Could that question be a rerun from virtually any week the past three seasons? Nice guys can only last for so long under such circumstances.

FOUR: From Bad To Worse

It felt like a lot of the Bristol wrecks Monday claimed drivers that didn’t need another trip on the tow truck. You had Earnhardt recording his third DNF, one short of his total for all of last year (18 starts). Kyle Busch continued a roller coaster year that has Joe Gibbs Racing unexpectedly falling behind.

But Danica Patrick and Chris Buescher got the brunt of Bristol’s unforgiving racetrack. Both don’t have a top-10 finish this year. Each need solid seasons for different reasons: Patrick’s trying to keep her career going while Buescher just needs money to buy a Roush Fenway Racing car after this JTG-Daugherty rental experiment.

However, neither one has impressed in 2017, and Bristol wrecks don’t make things better. The drivers now sit 29th and 30th in the NASCAR standings, a whopping 90 and 93 points, respectively, behind Denny Hamlin and the final playoff spot. It’s hard to dig a hole too deep, this early but those are the type of deficits that will be difficult, if not impossible to overcome.

Sure, Larson led the first 202 laps. The race lacked the Survivor-type mentality you needed here last spring. But the grip strip, combined with a track cleaned by Mother Nature, produced the best Bristol race we’ve seen in some time. Cars could run anywhere, a large enough groove leading to side-by-side action everywhere you looked.

Darting through lapped traffic became an art form in particular during some late-race battles up front. While some will mourn the old Bristol, this new one has come into its own as a place that can deliver the perfect spark of short track bumper cars and intermediate-style artistry.

Too bad half the fan base couldn’t see it on a Monday. What a dose of bad luck for a sport that could have used the momentum.

Point Six: Jr. is retiring after this year! Has Brian had his heart attack yet?

You know Darelll Waltrip is having one! LOL.

Reading the articles today you would think Jr. died instead of retired. The media is just as much to blame with the decline of this sport as anything else. Putting all the sports eggs in the Jr basket, they will find out real quick how much of a hit Nascar will take next year and beyond. And just think, 8 more months of the media blubbering over Jrs final races. We knew this day was coming, but it doesn’t make it any less cringe worthy.