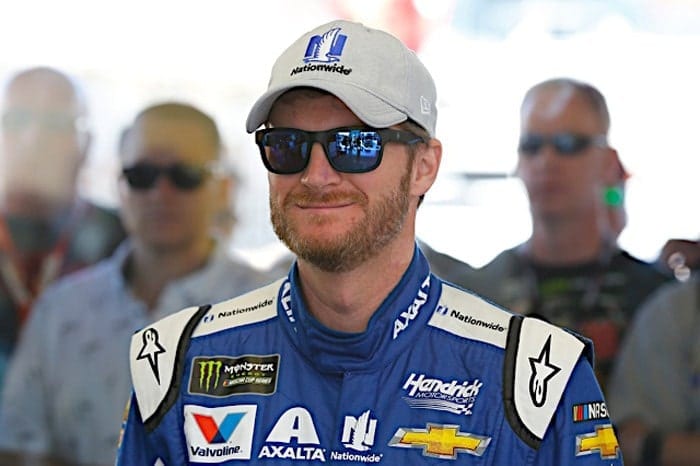 Hendrick Motorsports announced the decision Tuesday morning, shortly after Earnhardt himself addressed his No. 88 team with the news. A press conference will be held later this afternoon with Earnhardt and team principals.

Health has become a major question mark for Earnhardt, 42. Concussions last year forced the North Carolinian to sit out the second half of the season. He made it known before 2017 began that he was going to wait a couple of months before signing an extension to his expiring Hendrick Motorsports contract to ensure his health would be up to the task.

The son of Hall of Famer and seven-time champion Dale Earnhardt, Junior has had a solid career all his own.  Highlights include two back-to-back XFINITY Series championships in the late 1990s, two Daytona 500 wins and 14 straight NASCAR Most Popular Driver awards.

However, he’s never won a championship, finishing no higher than fifth in points during the Chase era. (He was third in 2003).

Earnhardt will spend his entire career driving for just two teams. He ran with the family operation, Dale Earnhardt Inc., from 1999-2007 and then aligned himself with Hendrick beginning in 2008. He has a total of 26 wins in 603 Cup Series starts along with 13 pole positions.

This season, though Earnhardt has noticeably struggled, with an average finish of 23.8 and just one top-five result. He’s also crashed three times in the first eight races, a difficult return after wrecks caused that recurrence of post-concussion syndrome in 2016.

No 2018 driver plans were announced in the release. Alex Bowman, currently employed by Hendrick as a test driver, would seem to be the favorite for the ride, however. Sponsor Nationwide seems to like him after his superb substitute job in the No. 88 last season.

Well it’s about time IMO as a long time Earnhardt fan 3/8/88 he really hasn’t been the same since he crashed that Corvette and got burnt in the road race some years ago. I will miss him, but I haven’t watch a full season in a couple of years. I stopped because if he wasn’t going to try and win a race there’s no point in me trying to watch a race either.

Good decision by Dale. Risking his health at this stage of his career is foolish. He’s had a decent career, has all the money and fame he needs, and still has time to live a normal family life if that’s what he wishes.

Get ready for the final decline in ratings come 2018 as the last large fan base of the old school fans (you know, the one’s Brian doesn’t need) have no reason to stick around anymore. Gordon, Stewart, Earnhardt in three consecutive seasons. With the added bonus of Edwards too. Ouch.

This is the best decision he could have made for himself and his family. Why put yourself at risk for possible permanent damage. I have no doubt he will put all his efforts into being a great father and I am sure he will still be involved with his race teams a lot more. Unfortunately for NASCAR, they will really see even more of a decline with Dale gone.

i’m sure the wreck yesterday was an eye opener. i bet his wife had some input into the decision. i was surprised when he came back after last year. na$car needed his story line to get interest in the series and put butts in the seats at daytona. now they’ll market him with the last time you’ll see him race at such and such track. after the earnhardt cash cow leaves, then watch out. stands will be empty come february 2018.

i think he’s frustrated with how he’s running. he missed half the year last year with the new car, so this year is his learning curve, when all others have that year under their belts. i think i read somewhere over the weekend where he wasn’t comfortable with bristol and the tire compound and track surface stickiness.

yes, he hasn’t been same since he got burned in the sportscar race all those years ago. everytime he turns his head and i see the glaring scar left from that i cringe. luckily his angel got him out of the car in time.

all we can do is hope that he finishes out the season without anymore hard hits. dega right on the horizon, and we know anything can happen there.

Thanks Dale…you just made your wife, Amy, the Yoko Ono of NASCAR…..

In all seriousness, NASCAR has a HUGE problem. The have lost almost ALL of their star power. Tony, Jeff, Carl, and soon to be Dale, and likely Danica. Add in Jimme, Harvick, and Kenseth all retiring in the near future, you can see the massive void that will be created.

The new generation has shown ZERO ability to have the personal connection to the fans like Tony, Jeff, and Dale have. The Dillion boys? Yeah… they are NC country boys right? Larson still has that connection to his roots. He has the ability to be the guy if he keeps progressing. Chase and Ryan got where they are due to their Father’s careers, and their individual talent. What I haven’t seen is Chase and Ryan being with the fans, and creating the emotional connection between them and the fans.

I wish there was a camera in offices at NASCAR today. I can just imagine BZF and his minions reactions today as their cash cow is leaving. Have to think the phone lines were lit up with representatives of Monster Energy, Fox, and NBC were on hold looking for renegotiations of their contacts.

The entire Helton and France families of NaziCar just got put on suicide watch~!!!

The NASCARpocalypse is upon us.

Brain Fart France’s sport has seen the exodus of a pair of popular legends (Gordon & Stewart), the guy who was in the best place to be the next great (Edwards) and now it’s most popular driver of all (Junior). All that is left is the 48 team with all the charisma of a Twitter PR account and France’s host of gimmicks, games and turd-polishing that has left the sport devoid of personalities AND quality racing!

The ratings decline, already in full force the last couple years, will shift into free fall next year. Exactly what is left to keep fans interested in the sport?

As for Junior, I am glad he can retire on his own terms and in good health. He’s set for life and ought to enjoy it.

I’m thinking NASCAR might not be TOO unhappy. This is going to be a major story to talk about the rest of the season instead of how great segments are and the fantastic racing from the low down force package. It might even put more butts in the seats to see JR’S last ride. He will probably be a car owner very soon and still show up every week. Just an opinion.

I guess we know what the “Game 7 moment” will be at Homestead.