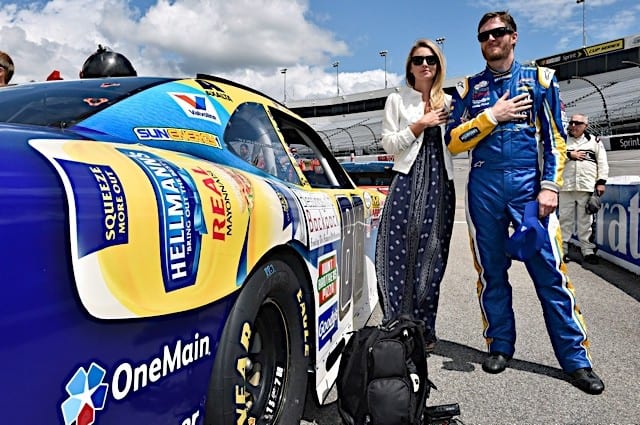 While announcing his retirement from Monster Energy NASCAR Cup Series competition on Tuesday, Earnhardt made his racing intentions clear for 2018 and beyond. There are a few things still on the table for the two-time Daytona 500 champion.

“I don’t see myself really detaching from NASCAR,” Earnhardt said. “My intention is to still be a part of the sport on some level.”

For Earnhardt, who will leave his No. 88 Chevrolet ride with Hendrick Motorsports come November, has a race team to run in JR Motorsports on the XFINITY Series side. With that organization under his belt, the 42-year-old will see some more seat time in 2018 in the second-tier series.

“In fact, I still have two XFINITY races to run for JR Motorsports for 2018,” he said. “So even after this season is over, you’ve not seen the last of me on the race track.”

Though he is a racer at heart, Earnhardt said he will make sure to put the owner-business side before the racer.

“I’m open to being a driver over at JRM when it works and it benefits the company,” he said. “Certainly, that’s why I’ve done it over the last several years. It’s a critical piece of our partnerships.”

For 2017, Earnhardt schedules to run two XFINITY races at Bristol Motor Speedway in August and Richmond International Raceway in September.

“We’re definitely going to leave the book open and continue to do that depending on the packages that come across the table,” he said. “I told (wife) Amy I might slip away off and run a 40-lapper at Hickory Speedway one night. So, if I’m missing on a Saturday night, she’ll know where I’m at.”

Outside of driving, JRM brings the opportunity for Earnhardt to grow talent through the NASCAR ranks. Currently, Earnhardt has William Byron, Elliott Sadler, Michael Annett and Justin Allgaier in his four-car XFINITY stable.

“That’s what I look forward to over the next few years,” he said. “To continue to be a breeding ground for talented men and women who are mechanics, crew chiefs, drivers. Our connection to HMS is critical to us having success to be able to do that.”

Damn right he’s no Tony Stewart. Stewart is a racer turned businessman. Earnhardt is the opposite. His older brother has the Senior resemblance and his older sister had the most natural driving talent.