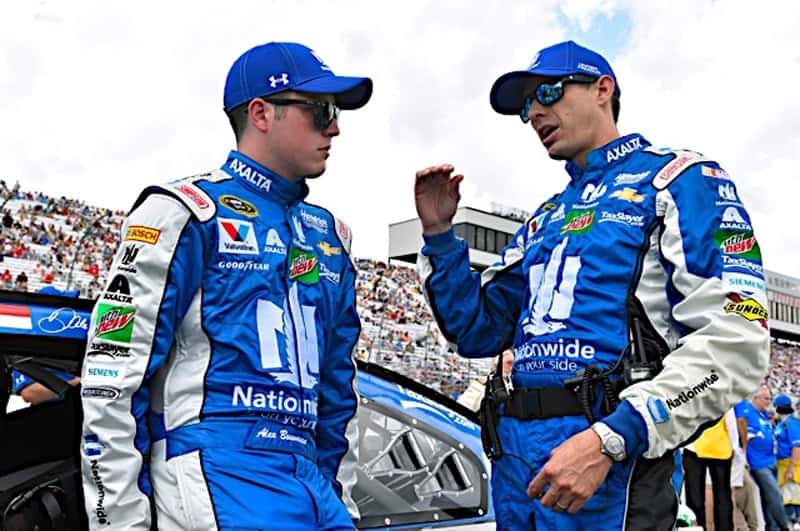 The news is sinking in. Dale Earnhardt Jr. is retiring. Just like Jeff Gordon and Tony Stewart, the show must go on. And it will.

Drivers come and go, but like Gordon and Stewart, Earnhardt is one of NASCAR’s main ambassadors. His face is plastered on advertisements left and right, creating a diverse collection of appreciation that no one can understand besides the racer himself.

Earnhardt is not an egocentric person, nor is he selfish or rude. Rather, he is humble, wise, determined and most of all, genuine. It is that genuine persona that created a multi-million dollar brand, bringing him closer to his fans and earning the stardom that he now faces.

As Earnhardt, 42, nears the end of his Monster Energy NASCAR Cup Series career, he will go down as not only NASCAR’s most popular driver, but as one who is virtually irreplaceable. Obviously, someone will take over his ride, but NASCAR might never see a driver so popular with the fans and so willing to take the time to stop and take a selfie with a real smile, even in the midst of an incredibly busy schedule.

Q: Who can be the new driver of the No. 88 car after Dale Earnhardt Jr. hangs up his helmet? – Justin K., Richmond.

A: Alex Bowman needs to be the next driver at Hendrick Motorsports. His capability in the racecar is clear after a 10-race stint with Hendrick during the latter stages of the 2016 season, and he has the respect of the man whose ride he would be taking over.

Bowman is known for his straightening out his attitude after his days at RAB Racing in the XFINITY Series and BK Racing at the Cup level. He didn’t have a top ride, and he let his frustrations get to the best of him.

It happens. It’s life and he was put into situations that were not ideal, such as his time with Tommy Baldwin Racing, featuring a mixture of mediocre runs to a highlight reel shot of him looking at a safety worker in disgust when a tire caught fire at New Hampshire Motor Speedway.

But you live and you learn, and that is what Bowman has done.

When TBR let him go just before the 2016 season began, he was fortunate to have earned a shot to run in a handful of races for JR Motorsports in the XFINITY Series. The opportunity would originally have just been one that could show he is capable of running up front, something he didn’t even have the chance to do during his limited time in the sport’s second-tier division prior to signing with a championship-caliber team.

Though it was only for a few races, the chance to work for Earnhardt, a two-time XFINITY Series champion, would be quite the resume booster. And he surely needed it after getting let go from a Cup ride that would likely improve in 2016 since TBR had just re-signed primary sponsor Nikko before it opted to put Regan Smith into the seat.

Sitting on the sidelines from mid-November until mid-May is not an ideal situation, but Bowman had to do it. Come May 14 of last year, he was geared up to make it known that he is a changed man.

And he did just that. His No. 88 car set the pace for 33 of 120 laps at Dover International Speedway, putting the focus on him and more importantly, the story that surrounded him.

When Earnhardt announced he would be sitting out of the Cup car for what was at first a week-by-week basis, he gave Bowman the seat. The call, while questionable at first since the No. 88 was in contention for a spot in the playoffs, would end up being the right one.

Bowman over-drove in his first pair of races with Hendrick. But as he settled in, learning Hendrick’s system, he was incredibly impressive.

His showman skills were on par with his teammates. They were even greater than Jimmie Johnson, Kasey Kahne and Chase Elliott at times, especially come Phoenix Raceway, where he dominated the race, leading 194 of 324 laps en route to a sixth-place finish.

Leading laps wasn’t what impressed folks about Bowman. It was his new composure behind the wheel. He clearly fit in well with the sponsors, the media and the fans. Replacing NASCAR’s most popular driver became a task that was shockingly doable, and one that Bowman made look easy by the end of his stint.

Though he was out of the Cup Series for so long and had never been in a competitive car, his capability to run up front was stunning. He had never even been close to running in the top 10 at tracks other than Daytona or Talladega. Suddenly, the Arizona native had all the power in the world, and he took advantage of that.

If Bowman gets the call, which he should as long as the Hendrick sponsors are willing to give him a chance and Kyle Larson doesn’t jump ship (don’t expect him to since Chip Ganassi Racing is performing extremely well this year), he would be a great fit at one of NASCAR’s most successful teams.

Not everyone deserves a shot at NASCAR’s top level. But Bowman is one who should.

He is clearly dedicated to what he does, and his new perspective on life is one that should be appreciated. As a young driver, there is a lot of potential that can come his way.

Rick Hendrick took a chance on Jeff Gordon and Jimmie Johnson. Why shouldn’t he take a chance on Alex Bowman?

A: NASCAR is in quite the predicament here. On one note, Earnhardt will likely join one of the two main broadcast partners, which will keep his large fan base intact.

But once he stops racing, NASCAR needs someone to step up to be its Most Popular Driver. No, it won’t be Danica Patrick, because in all fairness, no one knows what her future holds after Nature’s Bakery slapped her and Stewart-Haas Racing across the face mere weeks prior to the Daytona 500.

So who can it be?

Well, there are a few logical options. The first is Earnhardt’s teammate, Chase Elliott, who is already popular due to replacing Gordon and his father being 16-time Most Popular Driver Bill Elliott.

The younger Elliott is surrounded by a great cast, including major corporate sponsors and a car capable of winning championships. However, he is missing the raw emotions that Earnhardt has shown since he first broke onto the Cup Series scene in 2000.

Elliott tends to be robotic at times, such as when he won the pole for the Daytona 500. His interviews used to contain flavor and featured an ecstatic tone prior to his XFINITY Series title. But once he got to the Cup level, things changed and now, fans might be turned away from not so much a lack of sincerity, but a slight issue of relating to the folks who will submit their votes come the latter part of the season and his constant concealing of emotions.

While that could hold him back from becoming NASCAR’s Most Popular Driver, there is one face who can certainly step up to the plate.

Ryan Blaney might very well be the one to emerge as a fan favorite.

Aggressive and agile, Blaney fits into the traditional NASCAR fold. He gravitates to the youth movement and relates to the older generation of fans due to his respect for NASCAR’s past.

The aviators, the red and white fire suit and the classic NASCAR t-shirts are all reasons as to why Blaney is relatable to fans. He shows his leadership skills off the track as well. As he told me, there are two sides to his branding campaign: the throwback look with the Wood Brothers, and of course, the clean-collared look with Team Penske.

Will it be either of these two drivers who becomes the Most Popular Driver? Possibly. But are there other candidates? Of course.

With three of those names out of the fold completely next year, where does that leave NASCAR and its future stars?

Do you have questions for NASCAR Mailbox? Tweet me at @JosephNASCAR!

The Sainted Junior, the worlds only living martyr, ambassador of selflessness and goodness is the BS we must endure till the WWE at Homestead. Oh dear God. Look out for the next couple of months till Homestead and sadly beyond!

“On one note, Earnhardt will likely join one of the two main broadcast partners, which will keep his large fan base intact.”

Really!!!? I don’t remember seeing too many fans wearing t-shirts or cheering on their favorite broadcaster. Being part of the broadcast team for either network will not keep the fan base intact. It may make more people less likely to mute the tv (or puke when they hear B-B-B) but it will not keep fans in the sport or bring in new fans. There is no sport that I can think of that I watch or follow because of the announcers. As a viewer, most times you tolerate the announcers. Dumbest thing I’ve heard in a while. Get real.

You mean, that if I started attending races later this season, it would be a waste to wear my Jeff Burton shirt…

Bill B
Reply to  Capt Spaulding

If it were a vintage 99 Exide shirt you’d be fine. Retro is cool.
If you wore a Jeff Burton NBC shirt of him sitting at a desk with a microphone in front of him, you’d look foolish.

You think both JB shirts will be in stock in the “official” NASCAR souvenir trailer at a track near you?

On the replacement driver, I pick Danica Patrick, because you know it’s the switch to Ford that has kept her down in points this year. Put her back in a Chevy and watch her rocket back up to 20-24 finishes and winning numerous rounds of wave arounds and lucky dogs.

I don’t think she’d bring enough money to the table. And she’s not young enough.

Young enough for what?

To get another ride in a top car. Look at the ages of the drivers getting good rides. They go from Prom Night to a top ride in Winston Cup.

I set you up for a zinger and you gave me a straight answer…. for shame.

Some of the young drivers seem good with fans. However, popularity may be a different story. Even if the young ones I speak of have good personalities, they may not be as popular as Jr.

You’re spot on kb. but you forgot the Wave-Around Lucky Dog pass to the HOF.

This will become nauseating before it is over. The producers and announcers will june bug us to death. Hurry up end of year.

Kasey Kahne might be the best off in this deal. Now there is a seat at HMS to be filled before his.