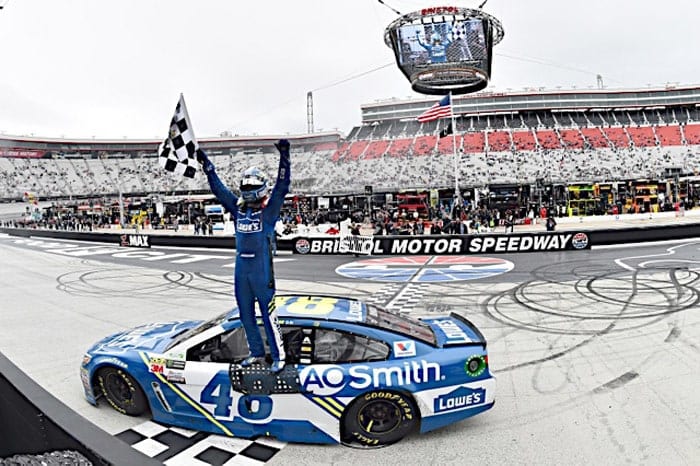 It took an extra day and some long-awaited, not-so-rainy weather, but for Jimmie Johnson the winning was worth the wait. Not that Johnson needs to do anything to be considered one of the top three or four NASCAR drivers of all time, but now he is just one win short of matching Cale Yarborough’s 83 career wins. It’s been quite a career for the No. 48 already.

Johnson won his second straight for what seems like 206 times. Well, it’s actually just 11 times now that he’s won back-to-back races in his eventual Hall of Fame career. But the amazing thing about Johnson and the No. 48 team is that almost every year they get off to a slow start, the questions start to come about what’s wrong, then boom… a win or two or maybe three or who knows how many on the season. I’m certainly no Johnson (or especially Knaus for that matter) cheerleader, but their remarkable record speaks for itself. That drive to be the first to win eight titles is a very real thing.

The sport will lose another one of its icons, at least from an on the track standpoint, with the announcement by Dale Earnhardt Jr. Tuesday that this will be his last season racing full-time in the Cup series. In terms of his on the track performance, Junior maybe didn’t quite live up to those lofty expectations that some had for him simply because of his name. The difficult thing for NASCAR about Junior not racing any longer, is that whether you were a big fan of his or not, he, without question, put people in the seats, and just as importantly, has been a sponsor magnet for the sport. While he will surely stay involved with his own team and probably be announcing the races for someone (the networks should be falling over themselves to get him as a commentator), it won’t be the same as having him on the track.

I’ll be the first to admit that for pretty much all of last season, I thought that Stewart-Haas announcing signing Clint Bowyer to replace Tony Stewart was not just a mistake, but quite possibly a big mistake. While it’s true Bowyer was racing in inferior equipment last year, he also showed almost no ability to compete, no matter what kind of track the series was racing on. But after a second-place finish on Monday at Bristol, it looks like what Stewart said was one of the reasons he was retiring is entirely true. Less and less of the results are due to what the driver can do and more and more of the results have to do with the kind of equipment the driver has. Whatever the case, Bowyer, who sits eighth in points, is proving he still has the drive to be not only competitive, but be a winner again this season.

If someone had asked what would be more surprising after eight races this season, Earnhardt announcing his retirement or that none of the Joe Gibbs Racing drivers would not only not have a win, but not be in the top 10 in points, I would definitely pick the second one there. But that is where things stand after Bristol with Kyle Busch leading the Gibbs crew at 11th in points. But not only has the team not won yet, Busch is the only Gibbs driver with a playoff point. And that is just one point. While you have to think the Gibbs teams will get things turned around at sometime soon, we are knocking on the door of May here, if better results don’t come very soon, more questions will.

The Cup Series heads to Richmond on Sunday, a place where Kurt Busch has excelled in recent years. But, I’m going to go out on a limb here and say when you’re hot, you’re hot and pick Johnson to win his third in a row. The deep, sleeper underdog who you might not think about pick is Jamie McMurray who has a top five and a top-10 finish in the last four races at Richmond.

The Jimmie Johnson bandwagon is full again. Why don’t the people just stay on no matter how long between wins. Number 8 is inevitable in November.