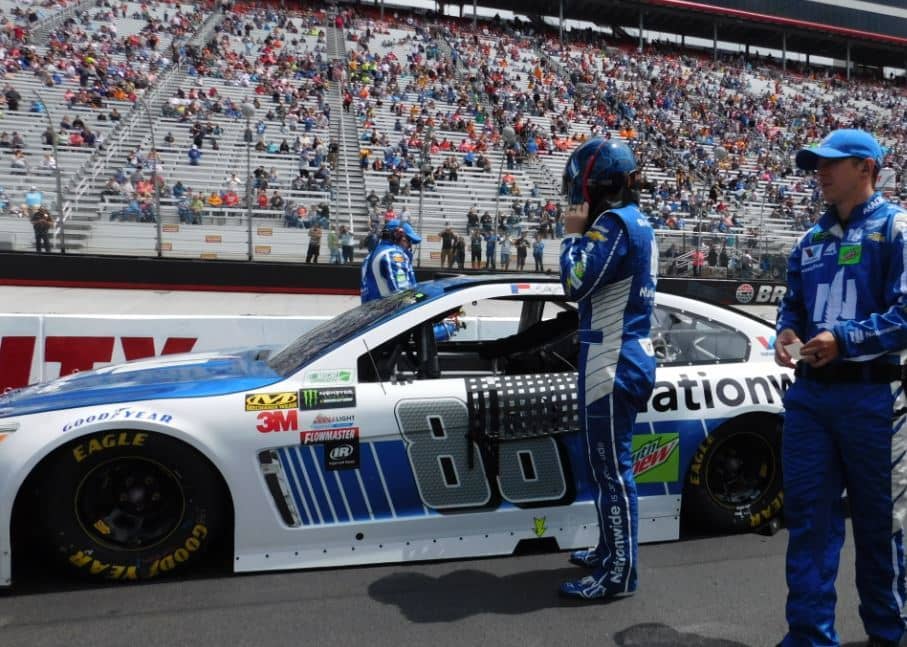 Is There Added Distraction for Earnhardt in Richmond?

For the second straight season, Richmond International Raceway will be the first race of someone’s last season. Except this time, Dale Earnhardt Jr. already has some racing under his belt in 2017.

For 2016, the historic short track saw Tony Stewart come back to the Monster Energy NASCAR Cup Series after missing the opening eight races due to a back injury sustained that January.

Jump ahead a year and Richmond will once again be the beneficiary of a driver choosing to hang it up at season’s end in Earnhardt, who announced his retirement from Cup on Tuesday.

He sure could use one. From this point on, the 42-year-old will have even more focus on his performance, if you could believe that.

But the pressure to succeed came before this announcement.

Teammates Jimmie Johnson and Chase Elliott have blossomed this season, with Johnson aiming for a third straight win this weekend while Elliott sits second in points with the second highest average finish (7.9).

Earnhardt, however, is 24th in points with only one top 10, a fifth three weeks ago at Texas Motor Speedway. Compare that to last year, when the No. 88 had three second-place finishes and sat sixth in points.

Can this announcement give Earnhardt a kick in the pants starting in Richmond? He only has one top five there since 2012 but hasn’t finished outside the top 20 since 2010.

You can argue some of his season struggles is plain misfortune, but the Hendrick Motorsports man will need to step it up if he wants to compete for a championship once more.

Bristol Motor Speedway had lots of black and white at the forefront of Monday’s rain-postponed race.

Like the color of the heavily discussed asphalt, Furniture Row Racing’s black Toyota of Martin Truex Jr. and Erik Jones‘ white ride were also a hot topic in the Food City 500, as both cars competed up front for the first time in their history as a two-car team.

It’s common ground for Truex, who has led an outstanding 432 laps already in 2017. However, leading 116 laps and finishing top 10 was unfamiliar for Truex, who hadn’t done either in four years at the half-mile.

For rookie Jones, he drove from 14th on the grid to inside the top five in the first stage. Running as high as second, a late crash brought the 20-year-old down to 17th on the day. Still, it was a strong performance on one of the year’s toughest tracks.

Which brings us to Richmond, the last leg of the (sort of) short track swing in 2017. Surprising to some, Truex, who has earned 75 percent of his career Cup wins in the last two years, has yet to grab one on a short track. But it’s been well in the making, as Truex led 193 laps last time out at Richmond.

For Jones, it will be another first-time track for him in Cup, so if he continues his current pace into this weekend, a top 10 is certainly expected.

What Small Teams Are There to Watch in XFINITY?

Like the Cup ranks, the XFINITY Series has more than a few drivers who could break through with a top five or top 10 here and there. For this weekend’s ToyotaCare 250, there’s four drivers in decent cars who could show an uptick in performance on this Virginia track.

We kick it off with Bristol surprise Quin Houff. The first-time XFINITY racer pulled off the best race in the short history of Precision Performance Motorsports when he wheeled his No. 46 into the top 10 on the high banks of Bristol. Steering clear of multiple wrecks, the 19-year-old finished 15th, giving him and team some well-earned TV time.

He is back with the Chevrolet team at Richmond with a few more eyeballs pointing his way.

Next is Casey Mears, the 14-year Cup veteran who has a part-time deal in the XFINITY Series for 2017. Through two starts this year, he has finishes of 14th at Auto Club Speedway and 38th at Texas.

The Fred Biagi-owned team did well last year, with four top 10s and a win with Aric Almirola. So, the equipment is there to make some waves. The experience is surely to assist the Californian to higher ground in start three.

The final two are roughly half Mears’ age: Dylan Lupton and Kyle Benjamin, who will each make their first series starts in 2017, the latter his series debut.

For Lupton, the 23-year-old will return to XFINITY with JGL Racing this weekend for his 11th career start. Running four Cup races in 2016, Lupton returns with more experience and a solid top-15 car to get back in the swing of things in 2017.

On the other hand, Benjamin has zero prior experience in national NASCAR competition and will make his series debut with Joe Gibbs Racing, so he’ll have some horsepower behind him. Plus, the 19-year-old is already a winner this season in the K&N Pro Series East, winning at Greenville-Pickens Speedway from the pole.

Tough competition on hand for these men, but we will see if experience or youth can put 250 laps together on Saturday.

F1 Teammates, Which Has the Upper Hand After Three Races?

As the Cup Series approaches its quarter mark of their 2017 season this weekend in Richmond, Formula 1 will reach the one-fifth mark of its schedule in Sochi, Russia, for round four for the world championship.

Before we go racing for the fourth time at the Sochi Autodrome, it may be a good time to bring out the opening teammate-on-teammate grades after the opening three rounds. Who has the upper hand going into Russia?

Sauber: The season didn’t start off the traditional way for the Ferrari-powered crew, as one of its full-time drivers, Pascal Wehrlein, sat out the opening two races due to a back injury.

So instead of having the sophomore driver in his No. 94 seat, it was Italian Antonio Giovinazzi making his first F1 starts. During this time, he crashed twice in China after a solid run in Australia. Meanwhile, fourth-year driver Marcus Ericsson has failed to finish twice.

The team finally saw a bright spot when Wehrlein returned last time out at Bahrain, when he finished 11th, one spot shy of points. With that, I give the lead to Wehrlein.

McLaren-Honda: Never a good sign when your season is already considered lost after three races. That’s the mentality currently on hand for McLaren-Honda, which, with drivers Fernando Alonso and Stoffel Vandoorne, has combined to finish only once in three races. Vandoorne, in fact, didn’t even get to start Bahrain due to mechanical woes.

So it’s tough to pick one over the other with the lack of on-track time. It would be natural to give it to the rookie Vandoorne, who has the best finish — or only finish — for the team in 2017, a 13th at Australia.

Renault: Finally, some positive news for one F1 team. Renault has shown marked improvement from a dismal 2016 that saw only three points finishes through 21 races with new driver Nico Hulkenburg. The former Force India man has qualified seventh the last two races and came home ninth last time at Bahrain. Jolyon Palmer made Q3 for his first time at Bahrain before dropping to 13th for the second straight race. The nod goes to Hulkenburg in these early weeks.

Williams: Like many expected, Felipe Massa has been the leader at Williams in 2017. While Canadian rookie Lance Stroll learns the ins and outs of a Formula 1 racecar, Massa has already scored 16 points and sits seventh in standings behind the top three teams. Stroll did manage to make Q3 in China, but has failed to finish a race this season. Massa with the lead.

Toro Rosso: Of all the teams this year, Toro Rosso may be the most fun to watch.

Wanting desperately to be the top of the mid-pack teams, the blue-and-purple duo of Daniil Kvyat and Carlos Sainz Jr. sure isn’t afraid to make a pass, as shown in colorful ways at Bahrain.

Maybe too colorful for Sainz, who saw his first DNF of the year after a controversial crash with Stroll while the Williams driver exited the pit lane. Preceding the wreck, the Spaniard opened the year with an eighth and a seventh, good enough to place him ninth in points.

Kvyat was a wild man in Bahrain, performing back-and-forth battles with Alonso nearly all night before finishing 12th. His one points finish gives the lead to Sainz.

Force India: You can’t ask for more when it comes to this team. Sergio Perez, returning for a fourth season, has earned three straight finishes well in the points, lining him up eighth in driver standings. His first-year teammate Esteban Ocon has also spent time in the points, maybe becoming the Darrell Wallace Jr. of Formula 1 with three straight 10th-place finishes heading into Russia. With more points, Perez gets the lead.

Haas F1 Team: It’s been an up-and-down start to 2017 for these guys, but they have  proven to be quick enough for solid points. Both Romain Grosjean and Kevin Magnussen have earned four points, tying them for 10th in driver standings. Due to better consistency, Grosjean is the team’s top player.

Red Bull: Now down to the main three teams in F1. Daniel Ricciardo and Max Verstappen haven’t been as familiar with the podium as they would’ve liked to be after three races, with Verstappen scoring the team’s only one so far at China. Both, however, are only separated by three points, with the top spot going to the Belgian teen.

Mercedes: After three races, Mercedes is not leading the championship. With Lewis Hamilton scoring the victory in China, he holds a substantial lead over first-year Silver Arrow Valtteri Bottas, who is nearly a full race of points behind Hamilton already. Though Bottas grabbed his first pole at Bahrain, that’s the only metric where he has sniffed an advantage. Hamilton keeps the lead.

Ferrari: Finally, the top team of 2017 thus far. And it is thanks to Sebastian Vettel, who has a second-place finish sandwiched between two race victories. That speed puts the four-time champ seven points ahead of Hamilton and a massive 34 points ahead of teammate Kimi Raikkonen (double what Raikkonen has earned all year). No surprise here, Vettel with the lead.

The hell with added distractions for the Golden Man/Child!!! How about us poor slobs that need to mute the TV…Junior this and that x1000 every minute! Never mind about the other drivers or their sponsors or their stories, we are going to be getting JUNIOR-LASH now till Homestead and beyond! How many times is there going to be a sob story as “track so and so” will be the last time Junior races there…and awwwweeee his wittle precious memories are just so special (and insert deceased Dad into the narrative)….blah, blah, blah! Excedrin Migraine strength please with a glass of water…one is a comin’ on!