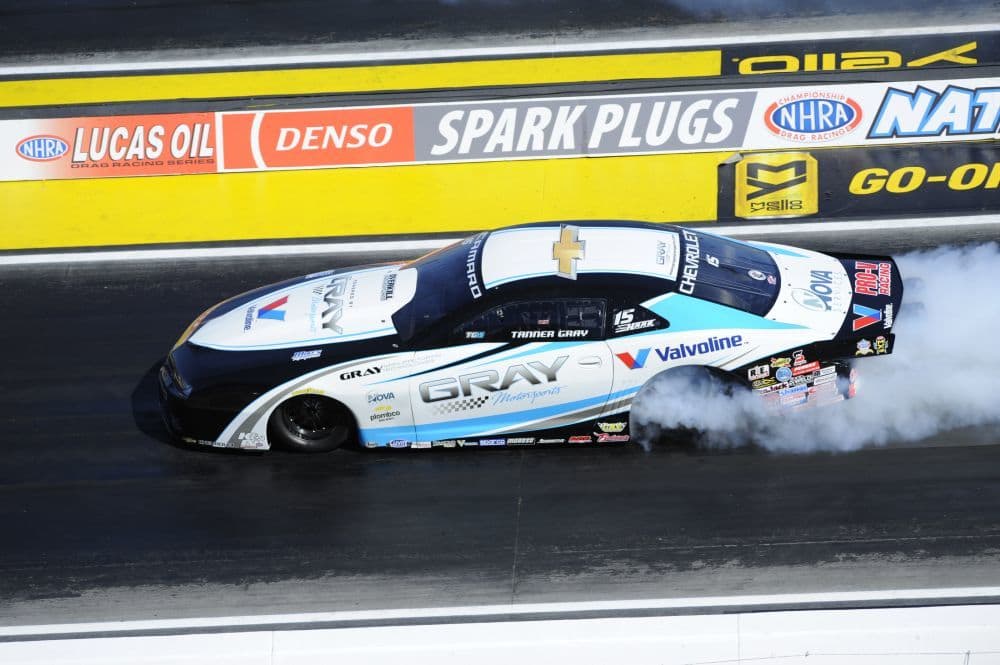 Sure the racing was exciting this past weekend, but as is always the case when they happen, the big buzz was about the fight. In case you didn’t hear about it somehow, after Alex Laughlin and Tanner Gray faced off in eliminations, Gray apparently was unhappy with how Laughlin staged his car and had some harsh words for Laughlin at the top end. Laughlin in turn took a return verbal shot of his own at Gray.

“I got down there, turned the car off and got out,” Laughlin said. “We were both walking over to the ticket stand to get our time slips and I had absolutely nothing to say to him. He grabbed his ticket before I got mine and then he slapped me on the back and said ‘how the (expletive deleted) did that work out for you?’

“I said, ‘Really dude? These people (at Elite Motorsports) have already done more for me than you guys ever did or ever will.’

To explain that last comment a bit, these teams were once affiliated, with Gray Motorsports providing engines to Laughlin’s family-owned operation. The relationship soured somewhere along the way and Laughlin is now tied with Elite Motorsports.

The hard feelings continued back to the pit area where eventually other team members got involved and things got physical.

“There was just mouthing back and forth after that. His guys got down there and I told them, ‘this kid has a lot to learn so someone please get ahold of him.’ And then it was, ‘to get to him, you’re going to have to get through us,’ and it went downhill from there,” said Laughlin. “We got back to the pit and I was telling Richard (Freeman, engine supplier) the story and Tanner is standing over there smiling at us from his pit. Richard said, ‘What are you looking at?’ and Tanner throws his hands up like ‘bring it on,’ and that’s when the crews came together.”

These two teams have a bit of a contentious history. And this isn’t the first time a driver has switched camps amidst some hard feelings either. Drew Skillman was affiliated in similar fashion with Elite until his family-owned operation grew dissatisfied with the equipment they were being provided. They jumped, also under slightly heated circumstances, and ended up going to Gray Motorsports.

But wait. There’s more. This sort of thing isn’t even limited to just these two teams. The season prior, Vincent Nobile and his family-owned operation started out affiliated with KB Racing, a relationship that also went south when Nobile called out the quality of the assistance he was receiving. Things got a bit ugly in the exchange and Nobile ended up with Elite.

The three big teams in Pro Stock right now are KB Racing, Elite Motorsports, and Gray Motorsports. It doesn’t seem like Elite and Gray have much use for each other, and if Nobile is still upset, it would seem there isn’t much love between Elite and KB either. Given the glowing things that Greg Anderson has had to say about young Tanner Gray, however, it does seem that relations between KB and Gray are at least warmer.

It’s probably par for the course though. Don Schumacher Racing and John Force Racing spend a lot of their time sparring over in the Nitro classes. They do say racing is like a family. No one ever said that these families, just like many others, can’t be a bit dysfunctional from time to time.

* Pro Stock driver John Gaydosh underwent knee surgery to repair his ACL just two weeks ago but has been cleared by his doctor to drive and will participate in the 4-Wide Nationals this weekend.

“The 4-Wides are a little different. I’m confident I can concentrate even when three other cars are on the track,” Gaydosh said. “This race is good for guys like me. Just one slip up by one driver can affect the other two drivers, giving me a chance to move out in front.”

* Pro Stock Motorcycle rider Angie Smith has picked up sponsorship from DENSO Products and Services Americas for four events this season, including this weekend at the 4-Wide Nationals at Smith’s home track, zMAX Dragway.

The on-track highlight of the week goes to Ron Capps, who won last week’s SpringNationals in Houston as he crossed the finish line in a literal blaze of glory. Pay particular attention to the slow motion shot. The fire is not outside the car, but inside with Capps. He came out of the inferno unscathed thanks to top flight safety gear.

The off-track highlight of the week is the fight between the Gray and Elite teams discussed above. So is this resolved or not? What is that Richard Freeman, owner of Elite, says at the end of this video?