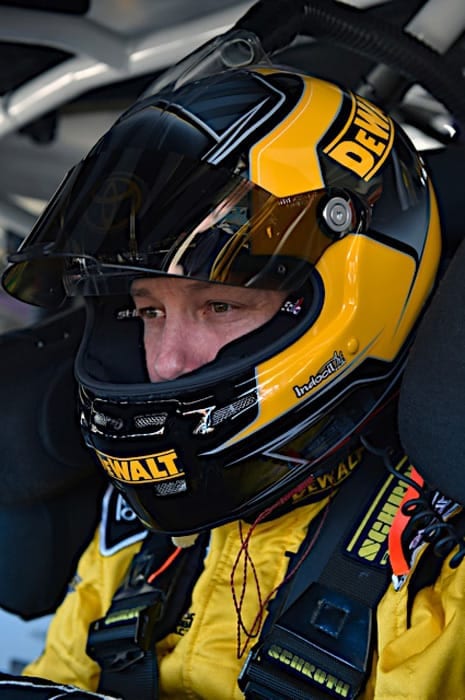 Entering the ninth race of the 2017 season, Matt Kenseth sits 20th in the championship standings, recording four top 10 finishes, but also having three finishes of 36th or worse.

During qualifying at Richmond International Raceway on Friday, Kenseth won the pole, with a lap of 121.076 mph, hoping it can kick start his year.

“I don’t win many poles, so anytime I win a pole, it’s pretty special,” Kenseth said. “They [the team] did a good job with the car today, and they had really good adjustments, so we were able to run one lap in the first couple of rounds to get us to the last round and I think that helped a lot, saving the tires. It’s exciting to be on the pole.”

This is the second-career pole Kenseth has recorded at Richmond, also winning it in April of 2013, his first race at the track with Joe Gibbs Racing. It’s his first pole since Kansas Speedway last fall, en route to a ninth-place finish after leading 116 circuits.

Ryan Blaney qualified second for Sunday’s 400-lap race (120.854 mph), marking his third start on the outside of the front row this season (Phoenix, Texas). The No. 21 car improved each round, opening up the session with the 19th quickest lap in Round One.

Stenhouse bounced off the wall in the second round, but it didn’t slow the car down. His fourth-place effort is the No. 17 car’s best qualifying effort since Atlanta Motor Speedway in March, also slotting in fourth.

“We just had too many laps on our tires,” Stenhouse said after his lap. “That was our biggest issue, we had more laps than anyone else. Having to make two laps every run was pretty difficult. We were good in practice, even on the longer runs in race trim. We busted out a good lap in practice for qualifying, so I knew we had the car for a top five run.”

Three-time Richmond winner Denny Hamlin will begin Sunday’s race from 16th. The lat time NASCAR came to Richmond, the No. 11 car wound up in Victory Lane.

After going for a spin in the first practice of the day Erik Jones will line up 20th on the grid. Trevor Bayne failed to make it to the second round of qualifying, though he turned the fourth fastest lap in opening practice. He will start 29th on Sunday.

There are two scheduled practice sessions for Saturday, the first beginning at 9:00 a.m. ET.

A Toyota driver wins the pole for the Toyota Owner’s 400.

The plot sickens! (And no, that isn’t a misprint!)

Logano led the first two qualifying rounds (round one tied with Harvick) Two Fords, and on the one that counts he “screws” up and is starting 5. Yeah, lol.

So much for “What’s wrong with Kenseth?” Just like Johnson.

When will people ever learn?

Oh well! Gotta write about someone!

Johnson had his typical qualifying session for the driver he considers the greatest ever. We get to watch him SLOWLY make his way to the front again until he’s on the front row after the last caution flag and shows how fast the car has been for the whole event.

He might, or he might not. Richmond is the last race before the farce, I mean, the playoffs, start. He is already solid in the farce, I mean, playoffs. Look for Johnson to really flex his muscles over the next month at Talladega (5/7), Kansas (5/13) Charlotte (5/20 and 5/28) and Dover (6/4). Those are playoff tracks, and you can bet Chad will be bringing strong cars to frighten the competition with. And Jimmie says he and Chad aren’t smart enough to play head games with the rest of the field! They already have the field beat, and the rest of the field knows it!

Might be time for Chad to do some more testing. Then he won’t win for a while and the “What’s wrong with Johnson?” will start again.