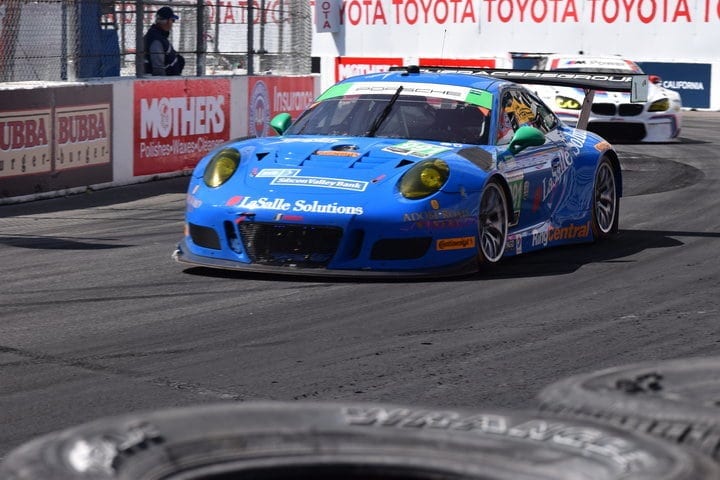 On Friday, The Racers Group (TRG) announced that two IMSA debutante racers, Parker Chase and Harry Gottsacker, will make their IMSA WeatherTech SportsCar Championship debut at Circuit of the Americas.  The two young racers, who comprise one of the youngest driving pairs in recent memory (average age: 16.5) will drive the No. 991 Porsche GT3 R in place of Wolf Henzler and Jan Heylen.

Both drivers are from New Braunfels, Tex., just 45 minutes away from Circuit of the Americas.  As a result, they’ll be making their debut at home.

“I’m excited to be back racing at COTA again,” Chase stated.  “My first professional race with Stuart [Robinson of Performance Motorsport Group] was here and I podiumed. I’m looking for a similar result next week, back in my home state of Texas.”

Chase and Gottsacker are quite familiar with each other.  Last year, they raced together as teammates with Performance Motorsports Group in Pirelli World Challenge’s GTS class.  Chase finished fourth in points driving a Ginetta G55 GT4, while Gottsacker was 13th in the standings.  The teammates paired up for the final three Sprint-X races last year as well, racing Gottsacker’s No. 29.

For 2017, the young teammates are racing part-time in Pirelli World Challenge, but also racing overseas.  They are skipping the Pirelli World Challenge Sprint-X opener at VIRginia International Raceway this weekend in order to race in the British GT Championship at Rockingham Motor Speedway in England (not to be confused with Rockingham Speedway, the high-banked tri-oval in North Carolina).

Gottsacker made note of the duo’s busy schedule.

“The travel will be intense after the British GT weekend, but I am so ready for my debut in IMSA,” Gottsacker said.  “Thank you Kevin Buckler (TRG) and Stuart Robinson (PMG) for such an amazing opportunity.”

The deal for Chase and Gottsacker to drive the No. 991 came along very late.  Robinson only inked the deal with TRG on Monday afternoon.

As for the drivers that Chase and Gottsacker are replacing, Henzler has factory responsibilities.  The Advance Auto Parts Sportscar Showdown is a direct clash with the FIA World Endurance Championship’s 6 Hours of Spa-Francochamps.  Kevin Estre, who normally shares Porsche GT Team’s No. 912 Porsche 911 RSR with Laurens Vanthoor, also races in the WEC.  Estre will be in Belgium and Henzler was called up to replace him.  Heylen is part-time with TRG, having raced for the team at Daytona and Long Beach.  Heylen competed at Sebring for Park Place Motorsports.