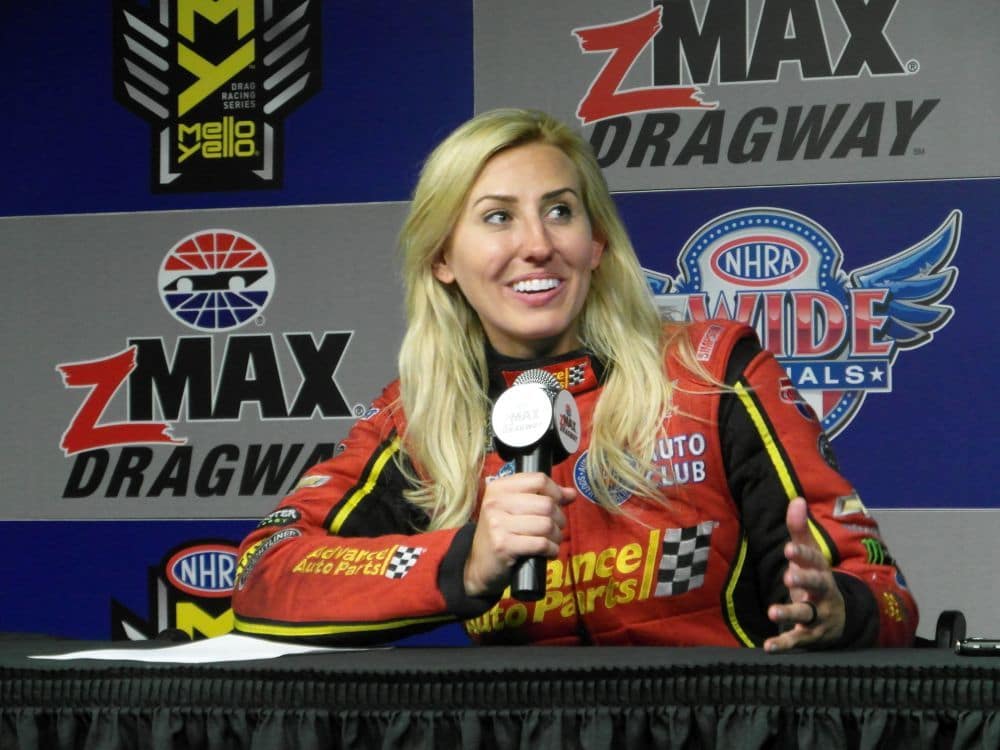 NHRA Four-Wide Nationals weekend is underway at the zMAX Dragway out in Charlotte. And a familiar last name, Force, tops the outstanding lineup you’ll see.

Courtney Force had a terrible run in round one qualifying for Funny Car, hurt when her car veered left but made up for it in round two. She scored an all-around track record pass, 3.851 seconds at 333.91 mph to top the class standings for the first day. Teammates Robert Hight and John Force are second and third behind her; Matt Hagan and Tim Wilkerson round out the top-five qualifiers.

Although weather for the day in Charlotte was warm and humid, the late hour of second round qualifying meant the sun was setting, providing somewhat cooler conditions. Tomorrow’s two rounds of qualifying take place earlier in the day with even warmer temperatures expected. However, Force is looking forward to seeing how her car performs in the heat since those conditions will more closely mirror the ones on Sunday during eliminations.

Doug Kalitta, Antron Brown, Steve Torrence, and Troy Coughlin Jr. round out the top-five qualifiers. Coughlin is one of three members of his family to slot inside the top five in three different classes.

In Pro Stock, Elite Motorsports continues to get stronger and stronger. At zMAX, they put Jeg Coughlin Jr. on top of the charts after the first two rounds of qualifying. Coughlin’s 6.578-second, 210.24 mph run was good enough to best teammate Erica Enders, backing up the strong statement from Elite. Greg Anderson, Chris McGaha and Jason Line slot in behind them.

In Pro Stock Motorcycle, defending champion Jerry Savoie is atop the field right now with a pass of 6.824 seconds at 196.24 mph. He leads Eddie Krawiec, Chip Ellis, Joey Gladstone and Hector Arana Jr.

Also making a much anticipated Four-Wide Nationals debut is the NHRA J&A Service Pro Mod Series. After two rounds of qualifying, Troy Coughlin, not to be outdone by brother Jeg, sits atop the list. He clocked a fast lap of 5.770 seconds at 254.95 mph. Right behind comes Mike Castellana, Michael Bowman, Steve Matusek and Sidnei Frigo.