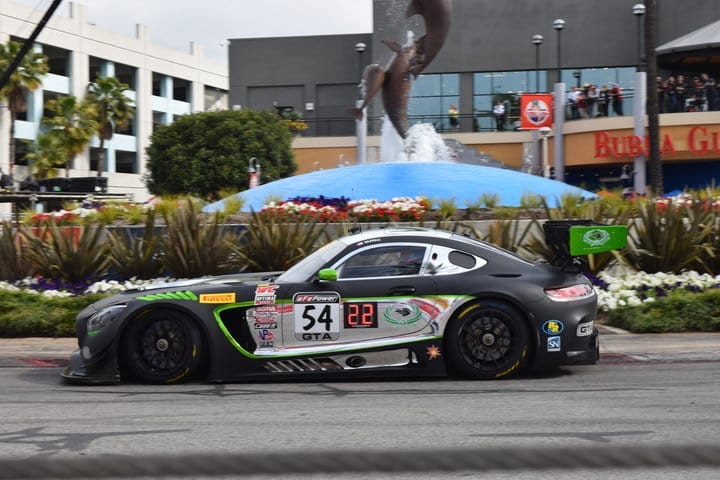 On Friday, Black Swan Racing’s Jeroen Bleekemolen was fastest overall in the two practices for Sprint-X teams at VIRginia International Raceway.  Bleekemolen lapped the 3.27-mile road course in 103.585 seconds (113.646 mph) to lead the pack.  Since Pirelli World Challenge hasn’t raced at VIR since 2010, the new track record will be set this weekend.  Bleekemolen’s lap was 13 seconds faster than the best previous PWC lap at the track.

Bleekemolen’s lap was more than eight-tenths of a second faster than McCann Racing’s Mike Skeen in the No. 82 Audi.  Skeen’s time was good enough for sixth overall.  Magnus Racing’s No. 44 Audi for team owner John Potter and Marco Seefried was third quickest, followed by GMG Racing’s Porsche for Laurens Vanthoor and James Sofronas.  The No. 16 Wright Motorsports Porsche for Jan Heylen and Michael Schein was fifth.

The Pro/Pro division was led by CRP Racing’s Ryan Dalziel and Daniel Morad in second overall with a lap of 104.054 seconds (113.134 mph).  The CRP Racing Mercedes was nearly three-tenths of a second faster than the R. Ferri No. 61 Ferrari of Alex Riberas and Kyle Marcelli.  Magnus Racing’s No. 4 Audi for Pierre Kaffer and Spencer Pumpelly was third quickest, followed by Wright Motorsports’ No. 58 for Patrick Long and Jõrg Bergmeister.  Cadillac Racing’s No. 8 for Michael Cooper and Jordan Taylor was fifth quickest.

TR3 Racing’s No. 31 Ferrari for Daniel Mancinelli and Andrea Montermini ended up a distant 25th overall.  That was because Montermini crashed the Ferrari after only a few laps on track.  The team repaired the 488 GT3.

In the Am/Am division, The Racers Group’s Aston Martin shared by Kris Wilson and Drew Regitz was quickest with a lap of 106.092 seconds (110.960 mph, 21st overall).  This lap was three-quarters of a second faster than Scuderia Corsa’s Martin Fuentes and Stefan Johansson.

In GT Cup, only two of the entries set times in the first session.  The No. 55 Dream Racing Motorsport Lamborghini of Alessandro Bressan and Yuki Hirata was fastest (28th overall) with a lap of 111.469 seconds (105.608 mph).

Finally, Case-It Racing’s Adam Merzon and Trent Hindman were quickest in GTS (30th overall) with a lap of 115.975 seconds (101.505 mph).  The lap was approximately three-eighths of a second faster than a similar Porsche for Stephen Cameron Racing’s Ari Balogh and Greg Liefooghe.

In the afternoon session, Pumpelly was fastest in the No. 4 Audi with a lap of 104.279 seconds (112.889 mph).  This lap was less than half a tenth quicker than the CRP duo of Dalziel and Morad.  Long and Bergmeister were third in class, followed by Riberas and Marcelli.

The McCann Racing No. 82 was fifth fastest, but they made some news in their own right.  Team owner Michael McCann was originally going to co-drive the No. 82 with Skeen.  However, McCann was forced to relinquish his drive due to illness.  Andrew Davis, a regular in the IMSA WeatherTech SportsCar Championship for Stevenson Motorsports in an Audi, has stepped up to take McCann’s place.

As Skeen has posted on his Instagram, the team has been reclassified to Pro/Pro as a result of Davis’ addition to the team.  Regardless, the McCann Audi still appears to be quite fast.

In Pro/Am, Bleekemolen was once again fastest in class.  His time of 104.327 seconds (112.838 mph) tied with the CRP Racing No. 2 Mercedes for second overall.  Bleekemolen was four-tenths of a second faster than Vanthoor in second.  Absolute Racing’s No. 78 Bentley for Yufeng Luo and Alexandre Imperatori was third quickest, followed by Schein and Heylen in the No. 16 Porsche.  The Always Evolving Nissan for Ricardo Sanchez and Frankie Montecalvo was fifth in class.

In Am/Am, the NGT Motorsport Ferrari 458 GT3 of Henrique Cisneros and Tyler McQuarrie was fastest in the division (23rd overall) with a lap of 106.326 seconds.  However, it has already been a trying weekend for the team as they crashed their primary car during the Promoter test on Thursday.  NGT Motorsport was forced to switch to a backup car for the rest of the weekend.

Cisneros and McQuarrie’s Ferrari was seven-hundredths of a second quicker than Fuentes and Johansson in a similar Ferrari.  M1GT Racing’s James Dayson and Larry Pegram were third fastest.

The second session had a couple of incidents that brought out red flags.  The No. 92 MCC Racing Mercedes shared by the father and son team of Alexandre Negrao and Alexandre Negrao Sr. found the tire barriers.  Later on, Absolute Racing’s Adderly Fong spun his No. 88 Bentley.  A couple more on-track incidents gave the second practice session a start-and-stop feel.

In GT Cup, Bressan and Hirata were fastest again with a lap of 113.871 seconds (103.380 mph).  The lap, good enough for 27th overall, was one and a quarter seconds faster than the Autometrics Motorsports Porsche of Joe Toussaint and Cory Friedman.  GTS saw Balogh and Liefooghe top the charts with a lap of 116.067 seconds (101.424 mph), good for 30th overall.  The lap was eight-tenths of a second faster than Merzon and Hindman in the best of the Case-It Racing Porsches.