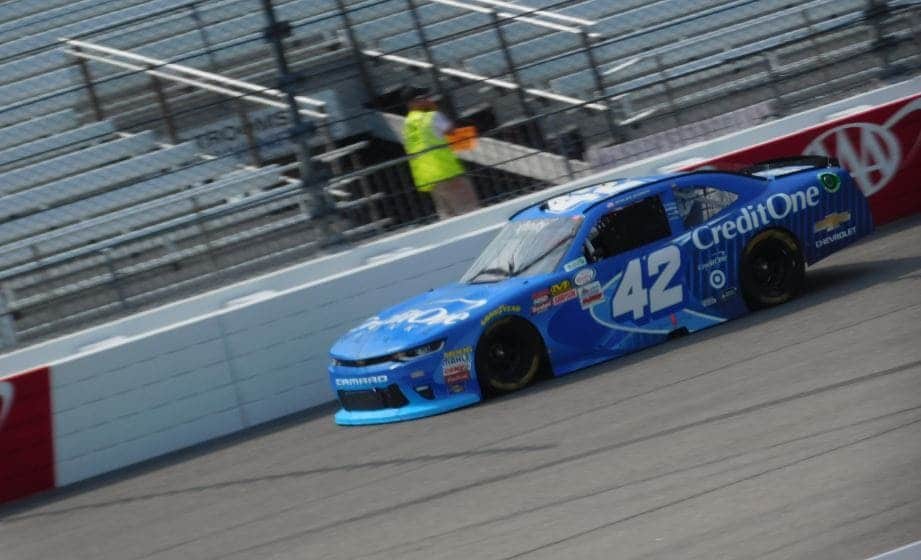 Kyle Larson grabbed the victory in Saturday’s ToyotaCare 250 from Richmond International Raceway after a caution ended the race under caution.

With Justin Allgaier running in second, there was confusion on when the caution flew and why the caution lights were lit.

Despite the controversy, the victory was Larson’s second of 2017 and seventh of his XFINITY Series career.

“Justin got a really good start,” Larson said. “He was able to hang on my right side into Turn 1 and they started crashing behind us. We raced back to the overtime line and as soon as we got the caution, I knew I had the win. Was happy to see them all wreck so I didn’t have to race Justin another lap. He had a fast car. I didn’t expect to be the winner.”

The best race in Allgaier’s XFINITY career ended with a second-place finish after Ryan Reed hit the backstretch wall. Despite leading a career-high 157 laps, Allgaier was frustrated at the result.

“Unfortunately, these things come down to the end,” Allgaier said. “We just got the shaft and it wasn’t any of our doing. That’s probably the hardest part.”

“On the flip side, we had a lights-out racecar today,” he said. “We’re dejected, but I can promise you next week we’ll be ready to go and win one we should’ve gotten this weekend.”

Daniel Hemric also had a career day in his No. 21 Richard Childress Racing Chevrolet, as the rookie earned his first pole and came home with a career-best finish of third. Austin Dillon and Ryan Blaney completed the top five.

A driver who was quick enough to contend in the top five throughout the day was first-time XFINITY racer Kyle Benjamin. The 19-year-old qualified on the front row and ran consistently in the top five before having a pit road issue and getting involved in a late crash. He finished 32nd.

The race was fairly clean throughout the 254 laps of competition… until the last 20 laps. While Elliott Sadler closed on leader Allgaier on fresh tires, the caution flew for BJ McLeod catching fire on the backstretch.

The incident brought the field to pit road, where Ty Dillon won the race off pit road. The momentum ended abruptly for Dillon, who was penalized for jumping the ensuing restart, opening the door for Larson to take the win.

How come do we always hear that the pace car is a Toyota Camry XSE and never a Ford Shelby GT500 KR which is closer to a real race car than any Cup bumper car?

I asked that before. Whenever it’s a Toyota, the announcers will always announce it. They never do when it’s a Ford or Chevrolet. Toyota must be paying them pretty good for the privilege.

Good point guys, we noticed that too.

winning all the time but it didn’t change nothing about THE DOMINATION IN THE SERIES….. It’s just

HAD MOST OF THE WINS…

2 single car teams went home while 5 Cup Drivers got to run today…. NASCAR CAN SHOVE THEIR RULES UP

Because if the big stars ain’t there they would only have 2000 butts in the seats instead of 3000!