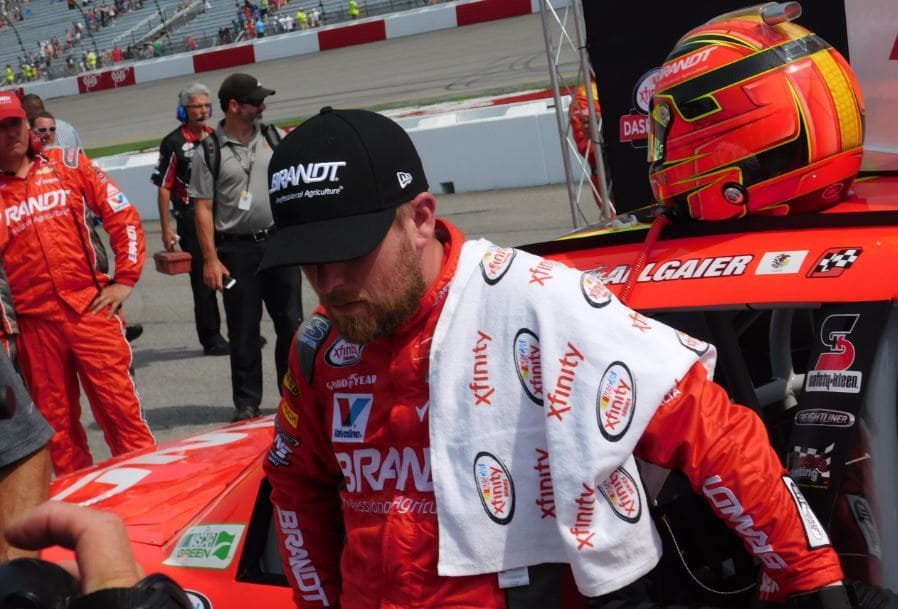 Monster Energy NASCAR Cup Series: Multiple Contenders Take over Richmond -Don’t you love the races where you don’t know who’ll win? Sunday’s Toyota Owners 400 had more than one driver who seemed to be unstoppable, and then they would ultimately be stopped.

Leading the opening 164 laps, Matt Kenseth’s pole-winning car looked to be on rails just like the fall 2015 race at Richmond, where he led 352 of 400 laps. That was until Brad Keselowski then took the top spot and led the race for 110 circuits.

From then on, it was all up for grabs.

Denny Hamlin had it, then Kevin Harvick, Kyle Busch, and even Ryan Newman took the lead for 25 laps after the leaders pitted late. All the while, Harvick, Hamlin and Keselowski raced two- and three-wide for what would later be for the race lead.

Indeed, pit strategy is just what the race needed to make it even more wild, as small teams like David Ragan, Cole Whitt stayed out to restart in the top six with less than 20 laps to go. Pit road penalties also played a role with Kyle Busch, Jimmie Johnson

The mess came as a benefit to race winner Joey Logano, who drive clear of the mess to drive away from Keselowski to take the win. That was one way to cap off the short track racing for a few months. – Zach Catanzareti

XFINITY Series: Justin Allgaier Comes up Short in Quest for First-Multi-Win Season – Everything was going perfect for Justin Allgaier on Saturday afternoon prior to a caution flying with 12 laps to go when B.J. McLeod blew an engine, setting up a late race restart.

Every lead lap car pitted, with Ty Dillon winning the race off pit road. But that’s when it got sketchy.

Dillon jumped the restart by a good two car-lengths. NASCAR posted the No. 3 car, sending him to the back of the pack. Kyle Larson captured the lead after getting around Allgaier on the restart and a pileup in Turn 3 led to a green-white-checkered finish.

Larson got the jump on the restart, clearing Allgaier by the exit of Turn 1 but Daytona winner Ryan Reed spun out halfway down the backstretch, bringing out the caution. The leaders had crossed the overtime line, so the race was deemed official. However, the drivers were confused.

The white flag flew without the caution flag in hand, though, the yellow lights were on. Larson and Allgaier raced back to the checkered flag, even though it wasn’t necessary. Larson was declared the winner.

It’s a day of what could have been for Allgaier, leading 157 laps, a career-high for himself and JR Motorsports. The second-place effort moved the No. 7 car to second in the championship standings, 41 points behind JRM teammate Elliott Sadler. – Dustin Albino

The desert race started off with a five-car pileup on Lap 1. Mikhail Aleshin’s No. 7 Schmidt Peterson Motorsports Honda broke loose on the exit of Turn 2 and collected Marco Andretti, Sebastien Bourdais, Max Chilton, Graham Rahal and Conor Daly in the process. Bourdais, who entered the night as the points leader, dropped to fourth in the standings and Pagenaud inherited the top spot.

The first 80 percent of the race had all four Team Penske cars in the top-five. J.R. Hildebrand was the lone non-Penske driver in the mix, and he earned his second career podium and first for Ed Carpenter Racing with a third-place finish.

Here are the full results from Phoenix.

The Verizon IndyCar Series now heads to Indy for the Grand Prix of Indianapolis in two weeks and the 101st running of the Indianapolis 500 on May 28. – John Haverlin

Sports Cars: The Rolling Hills of Virginia – This past weekend, Pirelli World Challenge traveled to VIRginia International Raceway near Afton, Va. for the first Sprint-X weekend of the season.  While the Sprint-X races were dominated by issues with the pit rules.  Saturday’s Race No. 1 saw more than half a dozen teams draw drive-through penalties for violating the minimum pit lane delta rule.  This was quite simply the amount of time that the car must spend in the pit lane.  Up until Friday, there was no rule to the amount of time that teams had to stay in their pit.  Friday saw a 30 second minimum enacted, likely for safety reasons.  Regardless of the reasoning, many of the top teams were penalized, resulting in TR3 Racing’s Ferrari for Daniel Mancinelli and Andrea Montermini claiming the overall win despite Mancinelli being involved in this crash with Magnus Racing’s Pierre Kaffer.

Unlike the Sprint-X events, the Touring Car races were sprint races where no one had to make a pit stop.  As a result, pit lane rules did not affect the race.  However, they were marred by big wrecks.

During Saturday’s Race No. 1, Shea Racing’s Jason Fichter spun in the Climbing Esses.  Naturally, with a name like the Climbing Esses, the terrain is not exactly flat off-course.  That led to this spectacular crash.

As you see, it was a nasty wreck for Fichter.  Luckily, he was able to exit his Honda Accord under his own power and walk away.  Fichter was taken to a local hospital for a checkup afterwards, but was released.

Sunday’s second Touring Car was cleaner…until the final 12 minutes.  Nick Wittmer and Greg Liefooghe were fighting for the overall lead when Wittmer slid off the road in the Roller Coaster section.  There were no replays of the crash on the official live stream, but it looked like Wittmer launched his BMW M235iR off the hill, costing him the race.  Wittmer also walked away from the wreck, but he was angry.  Wittmer threw his helmet to the ground, breaking a piece off in the process.  The race ended under yellow as a result, giving Liefooghe the win. – Phil Allaway

NHRA: Once a Year 4-Wide Show In The Books – If you’re tired of the big teams taking home all the wins, the Four-Wide Nationals from zMAX Dragway in Charlotte, North Carolina, offered up some different faces hoisting the Wally at the end of the day.

Steve Torrence came up short to Leah Pritchett last week in Houston but redeemed that loss by beating not just Pritchett, but her teammate Tony Schumacher as well as Terry McMillen in the Top Fuel final. Torrence’s 3.783 second, 323.89 mph run topped that of runner-up Schumacher who put a 3.874 second, 309.13 mph effort on the board.

“I pick on those Schumacher cars. It’s fun,” Torrence said. “I’ve been talking a little trash, but in 2012, it was my first race ever. I won that against Tony Schumacher in the final and it was one year before that Don Schumacher and I sat down and he told me ‘You can’t come out here and do this on your own and be competitive with these multicar teams’ and I’ll be honest, it pissed me off. I’m here to tell him you can, and we have and we’re going to continue to do so.”

Don Schumacher Racing wouldn’t be completely denied though, and went into the Funny Car final with a 75% chance of victory when Ron Capps, Jack Beckman, and Matt Hagan faced off with J.R. Todd. Hagan spun the tires early and it came down to Capps, running 3.933 seconds at 322.65 mph to top runner-up Beckman’s 3.959 seconds, 320.05 mph.

“Some of these drivers who say they don’t like [Four-Wide], they should just stay home,” Capps said. “This is a fun race. It’s the beginning of the season so it doesn’t impact the Countdown later in the year. It’d be cool to have an All-Star Four-Wides. This is a fun event. It changes everything, your mentality, the way you approach the track, approach each round. It’s not often you see that many drivers pop out of their car at the end of the track smiling, win or lose.”

Chris McGaha takes home his first ever Four-Wide win in Pro Stock after facing off against Greg Anderson, Drew Skillman, and Shane Gray. Skillman had a redlight start, while it came down to McGaha, who ran 6.591 seconds at 210.44 mph, and runner-up Anderson with a 6.614 second, 209.56 mph try.

Usually you can just figure on handing the Pro Stock Motorcycle Wally to one of the Harley-Davidson riders, and Hines and Krawiec both lined up for the finals, but it was LE Tonglet who took advantage of confusion on the start when Scotty Pollacheck jumped early. Krawiec and Hines were both caught off guard and left late while Tonglet rolled off to the win with a 6.864 second, 195.00 mph lap.

For the first time ever, Pro Mod joined the Four-Wide party and Mike Castellana has the distinction of being the class’s first Four-Wide winner. Castellana bested runner-up Jonathan Gray as well as Troy Coughlin and Michael Biehle. – Toni Montgomery

Formula 1: Bottas Surprising Winner in Sochi – For the first time since 2008, Ferrari had locked out the front row of a grand prix. When the two Prancing Ponies aligned themselves for the delayed start of the Russian Grand Prix, common belief would have held that Sebastian Vettel, holding the pole position, would drive away and score his third win of the year. And that’s why they race.

Valtteri Bottas found the necessary speed to pip Vettel heading into the Turn 3 and from there out managed to drive as he needed to. He built a large early lead but Vettel methodically chipped at it until they were within a second. Bottas pitted, while Ferrari waited another ten laps to bring in Vettel, believing that having the fresher tires at the end would be what mattered. While the strategy almost played out perfectly, Bottas was able to manage the gap and finished ahead of Vettel by about a second. It is the first win for the Finnish driver who joined Mercedes, leaving Williams, after Nico Rosberg retired at the beginning of this year.

Kimi Raikkonen earned Ferrari important constructor’s points by taking the third spot on the podium, while Lewis Hamilton wound up where he started, in fourth, in a race weekend that must go down as an overall disappointment.

Formula 1 begins its European swing next, as the series next races at Barcelona. With major, and needed upgrades coming to Red Bull, there will be questions as to whether they can join the title fight between Ferrari and Mercedes. – Huston Ladner