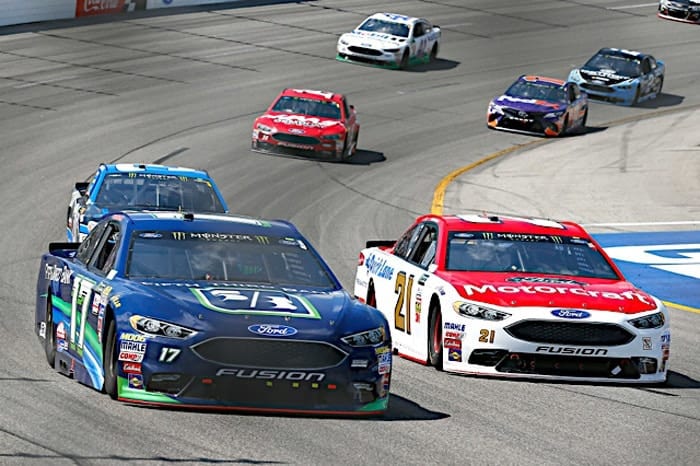 Next up on the Sprint Cup schedule is the first of two trips to the treacherous high banks of Talladega Superspeedway. This will be Cup race number 96 at the storied venue, a streak that runs all the way back to September of 1969 and a race won by Richard Brickhouse — the only win of his six-year, 39-race top echelon career. The second of four restrictor plate races in 2017, the only thing we can guarantee this weekend is that no-one has any idea who will win or what will transpire across the 200-laps and 500-miles. Could we see another long winless streak broken (Clint Bowyer), a first time winner (Chase Elliott) or will one of the usual suspects at plate tracks (Joey Logano, Denny Hamlin) get it done again? Put another way, this is a horrible week to set your DraftKings Fantasy league teams. But on a positive note, what a race at Dega does do is open up the race to anyone in the field. If you take the green flag on Sunday afternoon, you have a shot at victory. What will also be interesting to watch is the approach to the stages. The follow-the-leader racing we typically see in the first three-quarters of a place race is unlikely to be prevalent this weekend as teams scramble for early bonus points. Part of me hates restrictor plate races but the other part of me absolutely loves it. Few races are “appointment viewing” but Sunday’s 500-miler certainly is. Should be a good one to watch (even if you do so by peeking between your fingers).

Although the final results might not necessarily indicate it, Sunday at Richmond wasn’t a bad race for the beleaguered Joe Gibbs Racing team that has struggled in the first couple of months of the 2017 season after such a dominant 2016. In the positives column were a pole, a stage win and 159 laps led for Matt Kenseth and 59 laps led and a battling third place run — and best finish of the season — for Denny Hamlin. “You have to take solace in some small wins and goals. We executed great and didn’t make any mistakes,” said Hamlin, post-race of his finish. “We can build on that and survive this part of the season where we don’t have the fastest cars.” And for Hamlin and the entire JGR team the next few weeks after Talladega with races at Kansas Speedway and Charlotte Motor Speedway will be much more illustrative of how much progress is being made to catch up to the quickest cars. “Some of the issues you have are masked a little bit on a short track. By no means does this mean we’ve fixed everything,” commented Hamlin. And he’s right. These problems are not rectified overnight but if there is any organization in the garage that can turn it around, you would bet on a team like JGR to get it done. It might not be immediate progress but expect to see positive change in increments and while I’m at it, don’t discount a superspeedway victory on the high banks of Alabama this Sunday afternoon.

I haven’t written for a week or two, so I’ve not had the chance to mention the big news of the year so far: namely, Dale Earnhardt, Jr.’s retirement announcement. Now, on many levels, this is not a great surprise, certainly after he sat out the second half of 2016. But at the same time it still feels like something of a jarring announcement for NASCAR as a whole. After Tony Stewart, Jeff Gordon and (unexpectedly) Carl Edwards exited the sport, another huge name hanging up his gloves is probably exactly what the high-ups in Daytona didn’t want. How this will affect at track attendance and TV viewing in 2018 remains to be seen but you have to feel it won’t be a positive change. What’s key for me, though, is that Junior’s intrinsic link to the sport remains – albeit under different circumstances. The other key for me is to whom do the fans of the 88 transfer their loyalties? And, while I’m at it, do they even pick someone else to root for? Junior’s departure on top of everything else that has transpired feels like a seminal moment for the sport. Let’s hope the powers that be are already doing everything they can to mitigate against not seeing him on track anymore.

It’s hard to believe but Ricky Stenhouse, Jr. is now in his fifth full Cup season. The back-to-back Xfinity Series champion (2011 & 2012) has yet to translate his title winning form at the big boy level. In fact, in 157 Cup races, Stenhouse has just 9 top-5’s, 21 top-10’s and a measly 44 laps led – 26 of which came at Kansas Speedway in early 2013. Some of his failure is down to equipment. Roush Fenway Racing has not, it’s fair to say, been at the top end of the leaderboard for some time now. But this season we’ve seen some green shoots of optimism emerge in this swing of short track races. Stenhouse finished fourth at Phoenix International Raceway, ninth at Bristol Motor Speedway and fourth again this past weekend at Richmond International Raceway. “Man, we had to fight hard for this top five. I made a mistake early,” said Stenhouse after his morale boosting finish. “I thought we had a car capable of running in the top five a lot. I got loose into 3 and got into the fence and had to play catchup from there.” Of course the real test comes on the mile-and-a-half circuits which make up a good portion of the schedule. But in the short term, on a short track, it was a solid afternoon for Stenhouse. He’ll be looking for more of those in the next couple months.

It wasn’t the best attendance at Richmond this past Sunday at a venue that used to pack in 100,000 plus attendees. In the past couple years, the capacity of the track was halved to something in the region of 60,000 and on Sunday maybe 30,000 fans attended (and that’s a generous estimate.) “Viewing sports is different now than what it’s ever been,” noted third-place finisher and Virginia native, Denny Hamlin. “People with smartphones are watching races and games in the back of their car going up the highway. You don’t have to attend these races anymore to get a good experience. We live in a different world now.” And on one level, Hamlin is absolutely spot on. Sunday was a great race full of passing and action but it did little to attract even a half decent crowd. RIR Track President Dennis Bickmeier said after the race that “everything’s on the table” as they move forward. It will need to be as this problem is not getting better – it’s getting worse and worse. It’s time for some creative solutions because before long there’s going to be no-one left watching.

an other thing no smoking in the stands .95% of race fans smoke .so that keeps the fans home “””

I have been to many many races over the decades and in the 90’s into the 2000’s the number of people smoking in the stands at races compared to not was quite large. probably at least 85% if not more, of those in and around the seating sections I have been in DO NOT or DID NOT smoke at all. So not real sure where you get your information but from personal experience I can argue against your assertion.

Brian Fart and the constantly changing play field have screwed NASCAR along with the almighty dollar. We went from a period of about 40 years of relatively few changes to the basic rules of the game from a fan stand point. Yes there were hundreds of actual rules changes but 95% of them affecting the teams, drivers, and cars and not how the results of the race and season were done.
Brain fart came in and undid 40 years of stability with one big swoop of change and NASCAR as us old time fans knew it slowly and then rapidly began to vanish.
A couple of obvious issues that started the erosion, 1) the Chase and 2) the guaranteed starting spots for selected owners and teams. These both cut the heart of out true competition from the fans perspective. Look at the NHRA and qualifying, if 17 cars show up the 17th slowest goes home. DOES NOT MATTER who it is. John Force has missed races, DSR teams have missed races, etc. the little guy if they go faster they make it. Fair and honest competition. NASCAR lost sight of this principle a long time ago, first had the provisional which yes protected teams but had limited use, the the top 35 rule which essentially protected Petty Enterprises after missing races. NOTE TO NASCAR most fans at the time already had brought and paid for tickets. If they chose to not show up their choice to waste money. Back in the hey day there were hardly any walk up sales based on qualifying because you had to already have a ticket to make the trip.

If NASCAR would require drivers to sign autographs in groups of 4 or 5 drivers at local small tracks around the country on Tuesday and Wednesday during the racing season so each driver goes 5 or 6 times, they should also bring 6 cars that look like what the drivers race on sunday in with test driver to let the fans watch a heat race. Those are the people that go to races and they are the new fans for NASCAR