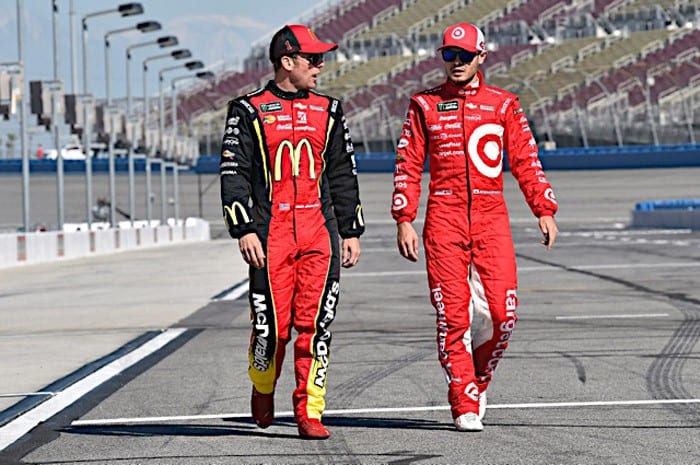 This season’s low down force package may have had its best results yet with Sunday afternoon’s race at Richmond. There were multiple grooves early in the race and yes, tires were a big factor, too. So when what turned out to the final caution came out, some teams gambled and stayed out while others took those precious new tires, which made all the difference in the end.

HOT
Joey Logano earned his first win of the season and give him some credit for doing what he had to do. The first thing was yes, coming into the pits to get the fresh tires on that final pit stop. The second thing was that he worked his way past the six cars in front of him with old tires on the restart to take the lead and get out in far enough so that teammate Brad Keselowski didn’t have time to catch him. The victory ensures Logano a spot in the coveted Chase field and he will once again be looking for his first championship. One of these years will be his year and who knows, maybe 2017 could be it.

NOT
What a nice story it would have been. Dale Earnhardt, Jr. announces he is going to retire at the end of the season earlier in the week, then goes on to get his first win of the season in the very next race. Well, those fairy tales just don’t happen very often. Junior had another rough day, hurt by a speeding on pit road penalty early in the race, and then getting an unintentional body slam from teammate Jimmie Johnson late in the race. All in all, it led to a 30th place finish for Junior. And even though there are still 17 races left in the regular season, it’s looking more and more like Junior will need a win to reach the Chase this year as he sits 24th in points and is 52 points behind 16th place Erik Jones. There is hope with Talladega on the schedule next week and then of course, the July Daytona race. But in a sort of sad way for Junior fans, if they feel their only hope is for a Junior win is on a restrictor plate track, then just maybe it is time for him to retire.

HOT
While Kyle Larson has been the clear leader for Chip Ganassi Racing this season as he is leading the points and has a victory, don’t fall asleep on his teammate. Jamie McMurray finished sixth on Sunday and now sits seventh in the points. It’s true that most don’t view McMurray as a serious title contender as he rarely challenges for the victory in these races, but there’s also nothing wrong with finishing consistently in the top 10. It just means the McMurray team isn’t that far off from contending for wins, so don’t be surprised if the No. 1 car makes an appearance in victory lane sometime this season.

NOT
Kyle Busch may have been a little perturbed at Logano after the race for the way Logano entered pit road on his final stop, with Busch trying to follow and not quite getting it right. The result was Busch didn’t hit the pit entry box correctly, sending him to the back of the pack for the finishing laps. But really what Logano did is something that has been going on for years with leaders. They pretend they are going to stay out, only to dive into the pits at the last second. Logano was doing every little thing he could to get an advantage and he didn’t break any rules. Maybe he broke a little etiquette, but how many races has etiquette won? The thing here is that Busch should know better than to be upset because we all know he is capable of doing the same thing if it helps his chances of winning a race.

HOT
Ricky Stenhouse, Jr. isn’t necessarily setting the NASCAR world on fire, but he has shown some signs of competitive life this year and that was the case on Sunday. Stenhouse, who seems to excel on the hot slick tracks that make the cars slide around like they are on dirt, turned in a solid performance with a fourth place finish on Sunday. So if the Chase started today (it doesn’t but just saying) Stenhouse would be in the playoffs as he sits 15th in the points with Kurt Busch, who is 17th, being the only driver with a win not in the top 16. It’s not been an incredible type of rebound year for the Roush-Fenway Racing cars of Stenhouse and Trevor Bayne, they are at least running competitive races again.

NOT
Denny Hamlin had a good point about the reason for the smallish crowd at Sunday’s race. There are what seems like a million different ways to keep track of the action that takes place in a NASCAR race without actually having to attend one. And it’s true, with all the in-car cameras and driver radios available, that certainly adds an element that many fans did not grow up with. But even with all of the digital technology, the one thing maybe NASCAR could do better is sell the experience of actually attending a race. While a large majority of us have to depend on the modern technology for most races because we can’t attend, all of the apps in the world can’t replace the feeling that goes through your body when all the engines are going full blast at the start of the race or on a restart. Just because there are different ways to experience a race now, doesn’t mean they are necessarily better, especially if you have an opportunity to attend one.