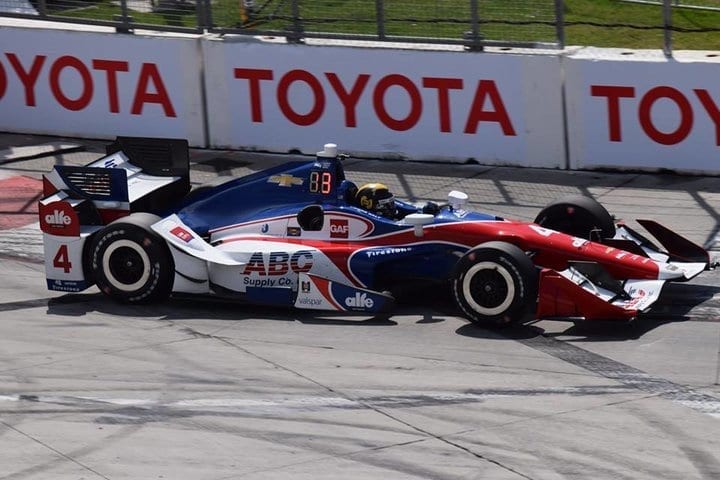 On Tuesday, AJ Foyt Racing’s Conor Daly was fastest in both sessions during a full field open test at Gateway Motorsports Park.  Daly’s lap in the second session of 25.4371 seconds (176.907 mph) was the only lap of the whole test to average over 175 mph.  However, it was a trying day for everyone involved as there were a number of interruptions.  9.5 inches of rain fell leading up to the test, resulting in significant flooding near the track (as of now, there is moderate flooding on the Mississippi River a few miles west of the track that is forecast to become major flooding in the near future).  Grinding and hole drilling to release ground water pressure caused delays.

In the morning session, Daly was quickest with a lap of 25.9046 seconds (173.714 mph).  This lap was two-tenths of a second faster than Team Penske’s Josef Newgarden.  Teammate Juan Pablo Montoya, prepping for his upcoming assault on the Indianapolis 500, was third quickest.  Fellow Penske racers Simon Pagenaud and Helio Castroneves were fourth and fifth.

Scott Dixon was the fastest of the Honda competitors in sixth.

There was one crash during the first session when Ed Carpenter Racing’s JR Hildebrand spun and hit the wall in turn 2.  Despite his recent hand injury at Long Beach that forced him to miss Barber Park, Hildebrand was uninjured.  Unfortunately for ECR, the car was unable to continue in the test.

Daly’s lap at over 176 mph was the fastest lap of the entire test and over three-tenths of a second quicker than Castroneves in second.  Once again, it was Daly and the Penske armada in the top five with Montoya, Newgarden and Pagenaud backing up Daly.  Dixon was once again the fastest Honda in sixth, a full seven-tenths of a second off of Daly.

In addition to being the fastest of all, Daly seems to really enjoy the 1.25-mile egg-shaped oval.

“I like this place, I think it’s really fun,” Daly said on Tuesday.  “Turn 1 is super ‘road coursey.’ It’s a real fight getting into the center of it (Turn 1), and with the wind the way it is, it’s obviously a little sketchy on the exit of Turn 2, but, man, I like it.”

INDYCAR was forced to stop the test nearly an hour early due to what was described simply as “conditions.”  INDYCAR states that the issues will be taken care of by series and track officials.  These issues were a continuation of all the rain that fell leading up to the test (the actual test was held under sunny skies).

With the significant delays, drivers spent time signing autographs for the fans in attendance on the frontstretch, much like what happened last year at Texas Motor Speedway.  It was a nice way to build goodwill.

The Bommarito Automotive Group 500 presented by Valvoline is scheduled for Aug. 26, a Saturday night.  It will be the first INDYCAR race at Gateway Motorsports Park since 2003.  That race, the Emerson Indy 250, was won by Castroneves.  He is one of three drivers (along with Dixon and Tony Kanaan that are still full-time in INDYCAR.