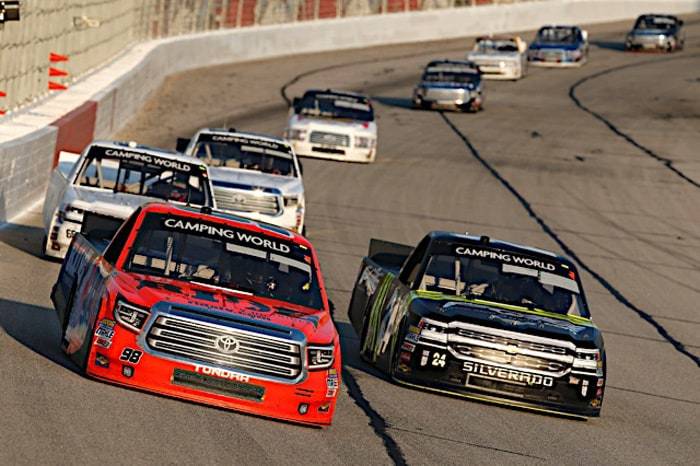 Kaz Grala began racing go-karts at the age of four, and by the time he was 10, he had a Bandolero Summer Shootout Championship under his belt. Moving to the UARA-Stars Series in 2013, he became the youngest winner in series history at Hickory Motor Speedway before joining Turner Scott Motorsports the following year to run full-time in the K&N Pro Series East.

Grala made nine starts last season with GMS Racing before entering this year full-time with the organization. Piloting one of four trucks for the team, Grala started the year off strong with a pole for the season-opening race at Daytona, one he followed up with a dramatic win as half of the field crashed behind him. A pair of 15th-place finishes in his other two starts this season have him sitting a solid fifth in the championship standings, though he does currently hold the lead for Rookie of the Year, thanks to the Daytona win.

Just five years ago, Noah Gragson began racing Bandeoleros at the ripe young age of 13, and has also run late models, the INEX Legends series, along with the K&N Pro Series East and West. He ran both series last season and won a combined four races.

Gragson made just two starts last year with Kyle Busch Motorsports, in a ride shared amongst a handful of drivers. This year, he joined the team full-time, hoping to capitalize on some of the success William Byron had in his rookie campaign last season. After crashing out on the first lap of the season-opener at Daytona, Gragson has finishes of 14th at Atlanta and a career-high fourth at Martsinville. He sits 11th in the championship standings, though the fourth-place result at Martinsville moved him up to second in the rookie points.

Chase Briscoe, grandson of Sprint Car owner Richard Briscoe, was born into racing. He ran, and won, just a single heat race and feature event in 2001 before sitting out until 2006. After that he raced mini-Sprints and Sprint cars before landing on the PEAK Antifreeze Stock Car Dream Challenge in 2013, where he finished second. Beginning in 2015, Briscoe volunteered religiously for Cunningham Motorsports in the ARCA Racing Series before the team offered him a test. He impressed in that test and was given two races during that season before moving full-time in 2016, where he won six races and the championship.

Briscoe entered the 2017 season with zero experience behind the wheel of a truck. Tapped to replace Tyler Reddick, who took the No. 29 team runner-up finish in the championship battle in 2015, Briscoe almost became the second virtual unknown in recent years to snag the season-opening race at Daytona. Still, he finished third and has results of 25th and 11th under his belt so far. He’s currently seventh in the standings.

Grant Enfinger began his racing career like many throughout the sport in go karts. He moved on to Legends, Super Late Models, ASA, CRA and PASS. In 2014, he scored six wins in the ARCA Racing Series and followed that up with six more wins and the championship in 2015.

Enfinger entered this season with the most experience in the Truck Series, notching 14 career starts between 2010 and 2016. The majority of those starts came when he ran seven events for GMS Racing, including Talladega where he scored a win for the organization. This year, he has a best finish of eighth in Atlanta and currently sits eighth in points.

Additionally, Enfinger holds a marketing degree from the University of South Alabama School of Business, something that could prove beneficial to him in the future, whether it’s in NASCAR or otherwise.

Cody Coughlin got his start in quarter-midgets, and he’s run Late Models, CRA, World Series of Asphalt Stock Car Racing and ARCA. Though the family name is synonymous with drag racing, the 21-year-old has set out for a career in NASCAR.

Coughlin had almost as much experience as Enfinger when he entered his rookie campaign this year. Making 10 starts last season for Kyle Busch Motorsports, Coughlin posted a best finish of 13th, though he did win the Last Chance Qualifier at Eldora Speedway to make the main event. While he’s finished no lower than where he started in each of the three races this season, Coughlin has a career-best finish of 11th at Daytona. He’s currently 13th in the championship standings.