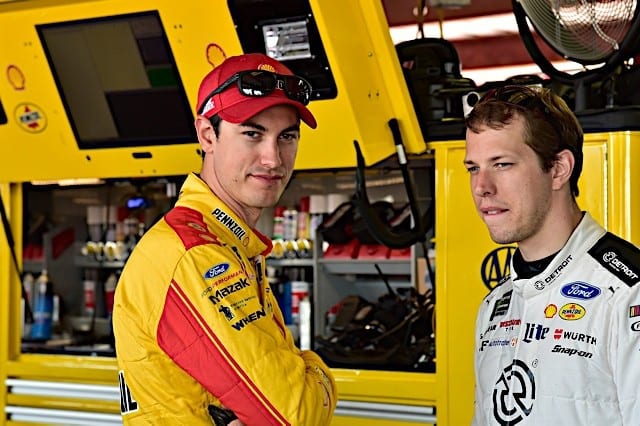 For Keselowski, plate racing, especially Talladega, has been a natural fit. His aggressive, timely and maneuver-happy racing tactics are highlighted when everyone is put into a pile and it has awarded him some thrilling trips to Victory Lane.

Additionally, his Team Penske teammate Joey Logano has followed his path, winning two of the last Talladega events. Together, they have swept the last three races and four of the last five at the 2.66-mile track.

Will the duo continue the streak on Sunday? Keselowski is used to performing under immense pressure at  Talladega, having to dodge playoff elimination in two of the last three seasons by the time the fall race came around. Though he blew a motor last time out, Keselowski was dominating the October race, starting second and leading a career-high 90 laps before the engine turned loose.

The eventual winner that day? The other Penske guy, Logano.

In the spring race last year, it wasn’t as bright for Logano, who wrecked out shortly after another run-in with Matt Kenseth. The winner that day? Keselowski.

Even when 50 percent of the team falls, the odds somehow still work out.

Will New Faces Offer a Punch on Sunday?

The Daytona 500 sure was fun. And by the looks of the grid, Sunday at Talladega Superspeedway may have a similar treat in store.

Like seasons past, a restrictor plate race brings out some smaller teams who bust out a couple new faces to tackle the opportunity events. For the Geico 500, we have DJ Kennington, Brendan Gaughan, Joey Gase and Elliott Sadler back in the Cup Series. Additionally, full-time drivers like Michael McDowell, Cole Whitt, David Ragan, Matt DiBenedetto and Landon Cassill are on the watch list.

Will any of these names be legitimate contenders on Sunday? For some, based off 2017’s only plate race, yes.

For a first-time effort, Kennington and Gaunt Brothers Racing ran well in their No. 96 Toyota. Running well, however, is one half of finishing at Talladega. They will have to stay out of trouble first, which is something the Canadian did not do last time out at Daytona.

Gase can be thrown into the pile of guys like Sadler, Ragan, McDowell and Whitt, who all have success at the plate tracks, either winning or finishing top 10 in Cup or XFINITY.

DiBenedetto grabbed a top 10 in the 500 and has enough experience to do it again on Sunday, while Cassill captured his one and only Cup top five here back in 2014.

Gaughan and the Beard Motorsports entry were one of the underdog stories of the 500, finishing 11th in their first race. With last year’s spring Talladega race going up in smoke, who says they can’t repeat the feat?

How Will Stage Racing Impact Strategy?

Almost every change starts with kneejerk reactions of panic and concern. For the debut of stage racing on tap for 2017, this was true in both the fans and media.

However, after a quarter of a season has passed, most negative remarks have seemed to silence, and it looks to have put that added excitement into each race as initially hoped.

Sunday at Talladega, it will only be the second time we see stages on a plate track. The Daytona 500 had its stages come down to the line, but will Talladega be the same?

If they don’t end under caution, you can bet on it. But how will pit strategy play a role? We once again saw Joe Gibbs Racing ride in the back for a portion of the 500, which led to a bold pit call early for its four drivers.

Will that put them out front when it counts? Or will it be a race of teammates out front? If so, how much risk do they put into that stage win?

The race for the stage win may be fun, but the battle from seventh to 10th will be even better. That’s where the two- and three-wide racing will turn up a notch during a point of the race commonly used to conserve your luck. Not so much this time, as some small teams will have key opportunity to earn some points.

Man, Saturday was a tough one for Justin Allgaier.

Running the race of his career in the XFINITY race at Richmond International Raceway last weekend, Allgaier lost the victory after a late-race crash ended the race under caution. After leading a career-high number of laps for both himself and JR Motorsports (156), Allgaier heads into Talladega will redemption in mind.

Is this a good track to have that in mind? It could be for Allgaier, who has sniffed Victory Lane there before.

During last year’s frantic run to the checkered flag, a savage crash with Logano and Blake Koch threw the caution before the leaders got to the line. Still, Allgaier traded paint with Brennan Poole and Chase Elliott and drag raced to finish second.

Backing that up with an eerily similar finish last July at Daytona (finishing second behind Aric Almirola when the race ended under caution), this is a good type of disappointment to have from plate racing.

Overall, Allgaier has four straight top-10 Talladega finishes, a pretty remarkable run concerning the track’s nature. So Saturday can certainly be the place he forgets about the Richmond ending, except the $100,000 from the Dash 4 Cash.

I am sure drivers will not show up but just RALPH III, after all he keeps telling us it is HIS racetrack. WHO IS DENY HIM, HIS DESTINY? LOL.

It wouldn’t surprise me if Keselowski or Sliced Bread won at any RP track. I think they have shown the most consistent ability to run up front and maneuver through traffic of any team in the last few years.

Personally, while I wouldn’t bet against Earnhardt at any RP track, I don’t think he is the man to beat any more. His being considered a favorite is largely based on past results.