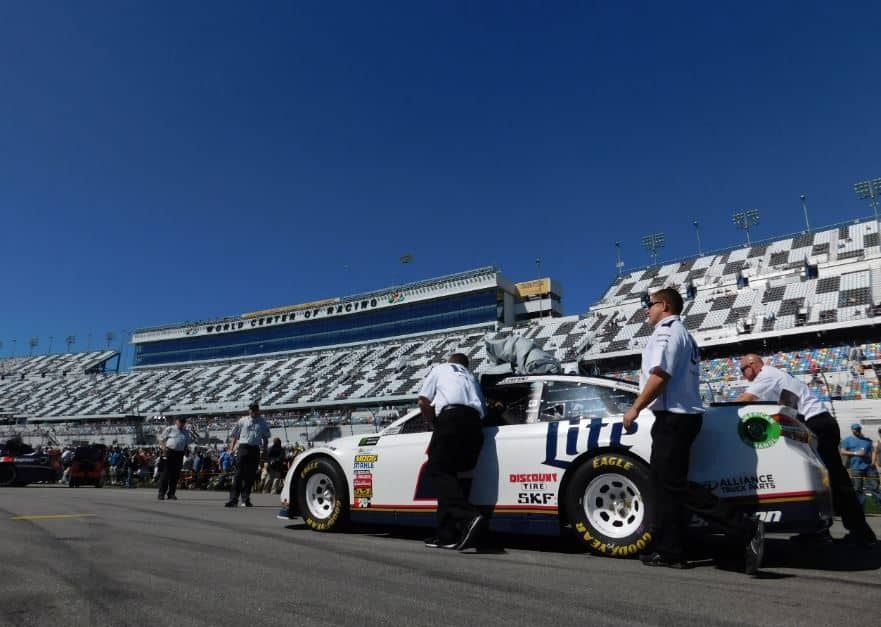 The Monster Energy NASCAR Cup Series heads to Talladega Superspeedway for the GEICO 500 this Sunday at 2 p.m. Cars hit the track on Friday at 11:30 a.m. for first practice, and then at 4:45 p.m. on Saturday for Coors Light Pole Qualifying.

Joey Logano is coming off a win at Richmond last weekend and is headed into Talladega, where he has visited Victory Lane twice in his career. Both those wins came in the fall races the past two seasons.

Logano has turned into a great restrictor plate racer over the past few years. Since 2015, his average finish at those tracks is 11th through nine races, seven spots higher than his career average at Talladega. During that nine race span, he has six top-10 finishes, which includes his Daytona 500 win in 2015.

Brad Keselowski was the fastest car on track last weekend, but was unable to track down teammate Logano on a late race restart. Keselowski rolled through the checkers in second place to notch a one-two finish for Penske Racing.

The Penske Fords have been the class of the field when it comes to plate tracks in recent years. It seems like whenever Logano is not in Victory Lane, Keselowski is. The No. 2 crew won the spring Talladega race in 2016 and finished fourth in the fall contest. That win added to his marks from 2009, 2012 and 2014.

Jimmie Johnson is currently on a three race hot-streak. Back-to-back wins at Texas and Bristol, and an 11th-place finish at Richmond have him up to eighth in series points.

Johnson’s recent results at Talladega are not spectacular, but he has finished nine straight races on the lead lap, avoiding the Big One. He did finish runner-up in the fall 2015 race, but has since finished in 18th, 22n, and 23rd.

When looking to add Johnson to your lineup, it is important to put his 2017 success in front of his latest Talladega results. NASCAR is a sport built around momentum, and the seven-time series champ has just that.

Talladega is known as Earnhardt country, and for good reason. Dale Earnhardt Jr. has six wins in Alabama, tied for second most with Jeff Gordon, and trails only his father’s 10 career Talladega wins.

Junior wrecked out of last season’s spring race 63 laps in and finished in last place. That race was the first Talladega DNF that Junior had since 2008.

In 2015, Dale won the spring race and finished second in the fall. This weekend is his best shot to pick up a win in his last season.

Chase Elliott has only run two MENCS races at Talladega, but has contended for the win in each. In his first start, he sealed the pole in qualifying, led 27 laps, but ultimately fell back to a fifth-place finish. In the fall, he started fourth, led nine laps, and finish 12th.

Elliott has three poles over five restrictor plate starts, but has not been able to pick up the win quite yet. He has led laps in four of those races, but wrecked himself out of contention in both Daytona races in 2016. Elliott has always shown the speed, and has another shot at picking up his first career win.

Clint Bowyer finished 15th at Richmond last week, his worst finish since the Daytona 500 (32nd). Bowyer continues to drive with confidence and enthusiasm since signing with Stewart-Haas Racing during the offseason.

Bowyer’s only two restrictor plate wins came at Talladega while driving for Richard Childress Racing in 2010 and 2011. Even driving for HScott Motorsports last season, Bowyer was able to pick up a seventh-place finish in the spring race. He is third amongst all active drivers in average finish at Talladega (14.7).

Bowyer has had success at this track in whichever equipment he seems to be driving. He is also riding a great deal of momentum in 2017.

Austin Dillon has been quiet so far in 2017 with only one top five to this point (Martinsville). Dillon ended the 2016 season strong, and many thought he would carry that into 2017. Dillon led seven laps at Daytona in February, but has since been averaging just above a top-20 finish through nine races.

Luckily for Dillon, it’s ‘Dega weekend. He finished third in the spring race in 2016 after starting on the outside of the front row. In the fall, he picked up another top 10 after finishing ninth.

Dillon is the best active driver when it comes to average finish at restrictor plates over his 15 race span (14.4). He has five top 10s in the last seven plate races. Dillon’s salary of $7,700 is an incredible deal for the amount of consistency he has shown at these tracks.

Ricky Stenhouse Jr. is a surprising name to find toward the top of the list when it comes to average finish at Talladega. He ranks second, behind only Elliott. He has even led laps in five of his six career races at the track.

Stenhouse is another driver who is running well so far in 2017. He finished fourth at Richmond, his fourth top 10 in six races. Roush Fenway Racing has become a weekly top-10 team after opting to only field two cars for this season.

David Ragan is a low risk, high reward driver to keep an eye on this weekend. He is priced at a low $6,000, and has run Talladega pretty well over the course of his career.

He was a Cinderella story in 2013, when he won the spring race, his second career win. His other career win also came at a restrictor plate race. He won the 2011 Coke Zero 400 at Daytona.

Ragan is back with Front Row Motorsports in 2017, the team he won with in 2013. In the Daytona 500 earlier this season, he ran as high as fourth place, and raced within the top 15 for much of the race. He ultimately ended up with a 25th-place finish.

Ragan in an aggressive plate track driver, and will push his way to the top half of the field. If he can keep his car clean, he has big payout potential. 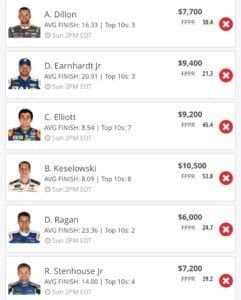