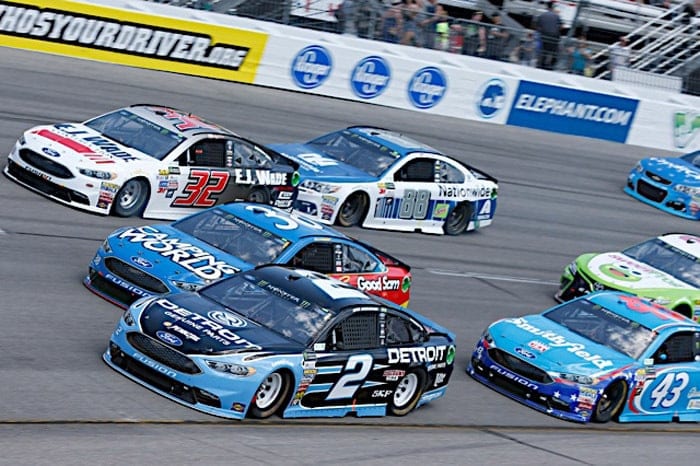 Ford has been on fire in 2017. With Joey Logano picking up his first win of the season at Richmond International Raceway last weekend, the Blue Oval now has four victories through the first nine races of the season, including the sport’s crown-jewel event at Daytona International Speedway in February.

The fact these four wins have come from drivers not including Kevin Harvick and Clint Bowyer — both expected to win multiple times this season — and Ford executives have to be ecstatic. Because the manufacturer has only been this hot once before in the last 12 years.

2014 was the last time Fusions were in Victory Lane this much this early. Before that? You’d have to go back to 2005, when Roush Fenway Racing was a five-car team (remember those?), which consisted of Mark Martin, Greg Biffle, Matt Kenseth, Kurt Busch and Carl Edwards. Three of those drivers don’t race anymore, anywhere, period.

This jump in performance has to be attributed to Stewart-Haas Racing’s jump from Chevrolet to Ford this season. While Team Penske has been solid the past two seasons, with running mates such as Richard Petty Motorsports, Front Row Motorsports and RFR, it was hard to make the kinds of leaps and bounds the Ford camp has. With SHR taking a year or so to get used to the new Ford body, expect every team to pick up their performance between now and this time next year.

But every pickup means a loss, and this season it’s the Toyotas that have struggled at Ford’s expense.

How about those mighty Toyotas? Remember them, the manufacturer that won 16 of the 36 races in 2016? Toyota has just a single win this season, coming from Martin Truex Jr. at Las Vegas Motor Speedway in the third race of the season. While Truex has been on a tear in 2017, many thought it would again be the Joe Gibbs Racing contingent of Denny Hamlin, Kyle Busch, Daniel Suarez and Kenseth leading the charge as it did in 2015 and 2016.

Instead, Truex and rookie teammate Erik Jones have been making the majority of Toyota’s headlines this season, along with another driver (Edwards) who isn’t even racing in 2017. A surprise departure is expected to bring headlines, but when that’s still one of the leading stories in the Toyota camp a quarter of the way through the season, something has gone awry.

But to fall off this fast is definitely surprising. This is a team that had two cars in last year’s Final Four at Homestead-Miami Speedway and was a dozen or so laps away from a backflip onto the championship stage. To be winless 25 percent of the way through the season, well, if it were 2008 it might have been expected. After all, that was the year JGR jumped to a struggling Toyota camp. But it won the fourth race of the season with Busch at Atlanta Motor Speedway.

The last time JGR didn’t win this deep into a season was 10 years ago, when it took Hamlin 16 tries before getting his first win of the season at New Hampshire Motor Speedway. What was different about the sport in 2007? Well, Casey Mears and Juan Pablo Montoya both won their first races. Neither of them still race in Cup, and, in Montoya’s case, doesn’t run NASCAR at all. The Car of Tomorrow made its entrance before being phased out a handful of years later. And JGR ran Chevrolets!

2017 has been the worst start for JGR ever while running Toyotas, and it’s an issue it best get sorted out sooner rather than later. After all, seven of the 16 playoff spots have already been filled. With drivers like Harvick, Bowyer, Chase Elliott, Jones, Ryan Blaney and more knocking on the door, the playoff grid could become really interesting during this summer.

Ah, Brain has a plan to get his beloved Toys back on top..it started this today! LOL.

It’s a long way to the end and Brian has plans to get number eight for Johnson before NA$CAR bites the dust.