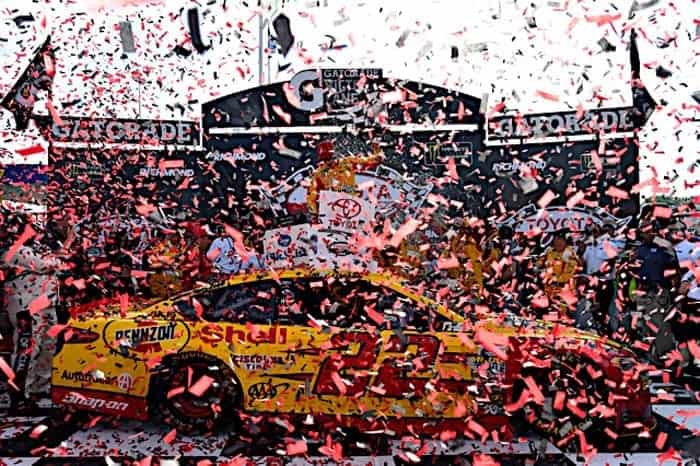 Joey Logano is not locked into the Monster Energy NASCAR Cup Series playoffs just yet.

The No. 22 Ford failed the post race inspection following the Toyota Owner’s 400 at Richmond International Raceway, and has been punished with an L1-level penalty, which marks Logano’s win in the event as an encumbered one, NASCAR announced on Thursday.

Logano is not guaranteed a spot in the playoffs now, and he will no longer receive the five playoff points awarded for a regular season win.

The infraction was discovered during the car’s tear down at NASCAR’s R&D Center in Concord, N.C.

Logano will keep the trophy earned from the race, as the win at Richmond still counts towards his stats, just not his season points.

The Connecticut native is the first driver at the Cup level to be hammered by NASCAR’s encumbered win policy, which was introduced at the start of the 2016 season.

The team received the penalty for a rear suspension violation. According to section 20 of the NASCAR rulebook, “the Truck trailing arm spacer/pinion angle shim mating surfaces must be planar and must be in complete contact with corresponding mating surfaces at all points and at all times.” The No. 22 team failed to do so and was penalized accordingly.

In addition to the encumbered win, Logano’s crew chief Todd Gordon was fined $50,000 and is suspended for the next two races. The suspension comes at a time when Team Penske’s other MENCS crew chief Paul Wolfe is serving a suspension as well.

Logano and the No. 22 team was fined 25 owner and driver points.

Penske still has the option to appeal the penalty. No word at this point if the team will or not.

Denny Hamlin, who finished third place in the race at RIR, was also penalized following the post race inspection for having a missing lug nut. No. 11 crew chief Mike Wheeler was fined $10,000 for the infraction.

I still have a problem with them letting the win stand for any driver if the car is found to have that big of an issue after the fact.

So, can anyone confirm that having a”Truck trailing arm spacer/pinion angle shim mating surfaces must be planar and must be in complete contact with corresponding mating surfaces at all points and at all times” would provide a significant advantage during the race?

tcfromaz
Reply to  Bill B

You’d think they’d find that in pre-race inspection. Could the change happen during the post-race celebrating?

Thats why I support the impounding of the cars after qualifying. As you know F1 does that and it doesn’t seem to be a hardship.

Funny how people still call the 48 a bunch of cheaters, sorry, Penske has had the title for several years now.

Dumb. Doesn’t he know you have to do your winning donuts and back it into the wall? Or burn the rear tires off during your burnout and destroy the rear fenders and everything else underneath? Oh well. He’s still young.

Well, it will be interesting to see if NASCAR maintains consistency or will the favorites be excused regarding this type of scenario in the future? NASCARS problem is their inconsistency. Would they be this embolden if this were a Toyota product or someone having to make “that call” to “MR” Hendrick? I really believe it will
not happen, it just won’t. Ford needed a slap, winning above the other two manufacturers is bad for business. Keep fighting Team Penske, go get em’!

Again time will tell…….funny how they grow balls with Ford, always…lol.