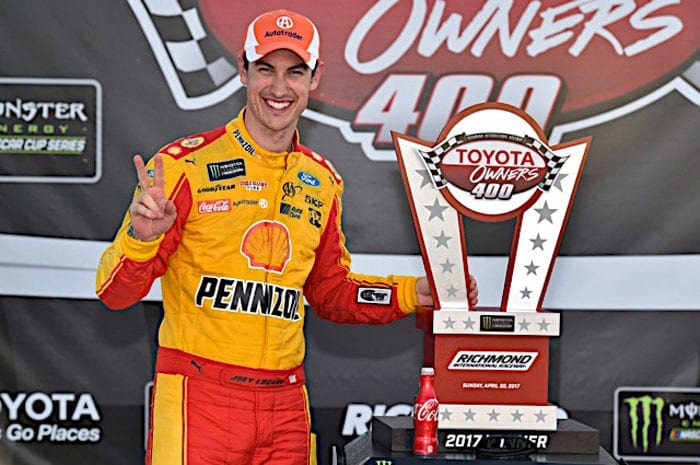 That’s because Thursday (May 4), Logano’s No. 22 was announced to have had a rear suspension violation found at NASCAR’s R&D center following the race, which means a few things for the Team Penske organization. There’s a $50,000 fine involved, as well as the loss of 25 points in both the driver and owner point standings, and crew chief Todd Gordon is suspended for two races.

Oh, but again, he keeps the win. It’s just that it doesn’t mean anything more than another win on Logano’s overall stat sheet. He’s unable to use the victory as a ticket into the playoffs and the five playoff points accrued due to the win can’t be used in any capacity.

A win’s a win, though. Encumbered, that’s what they’re calling it.

Which is something we’ve been expecting for a little over half a year at this point. Last September, the word first entered the NASCAR lexicon to describe finishes wherein affected drivers had some sort of post-race infraction that would require, per NASCAR’s rule book, a major penalty, like failure of the laser inspection system or missing three or more lug nuts.

We’re talking something that Scott Miller, senior vp of competition at NASCAR, said at the time would have to be, “egregious, it will be deliberate, it won’t be an accident.” Something that, for instance, doesn’t just fail the laser inspection platform after the race. It’s not even in the same ballpark.

Logano’s where we see the portion about wins come into play. With encumbered wins, yes, drivers get to keep the victory (Logano’s 18th in Cup competition, if you’re keeping score at home). But NASCAR has deemed the team’s rules issue so hefty that it doesn’t count whatsoever beyond that. Heck, even now there are probably people crafting a petition to add an asterisk in the record books or something.

That just may beg the question: why not go all the way and strip Logano entirely?

Well, the very query opens up a whole can of worms on whether or not you believe NASCAR should ever remove a victory in the Cup Series post-finish. Maybe you do, maybe you don’t. That’s a debate for another day and is one you’ve probably already had with someone else, perhaps even this week.

But even if you think NASCAR should consider removing a win from the record book, it may not be that easy. It’s not like that tends to happen in other sports, after all (with occasional exceptions, but rare, very rare), and doing so in NASCAR competition would be a little tough, too. It’s something that hasn’t been done since 1955 (Fireball Roberts, who had an illegal engine), and suddenly demolishing that precedent would be quite the shock indeed.

Because think about it this way: let’s say a driver fails post-race inspection with this or that infraction. With said infraction, NASCAR isn’t necessarily saying that the car’s illegality gave it the win, just that it didn’t fit the criteria established. Who’s to say Logano wouldn’t have won even if his car was squeaky clean? And what if some other factor possibly led to the car being deemed illegal, such as errant race contact? Or so the team says, of course.

Plus, imagine all the ramifications in an age of social media and when sponsors are perhaps more important than ever before. Picture NASCAR announcing on a Thursday that that win that a driver had, one that’s already been celebrated, shared on social media, possibly even marketed around is suddenly no longer a thing.

Judgment calls like that? Iffy. So, NASCAR has decreed, it’s best to go purely by something it can define, which is whether or not a car is legal at the time it passes officials’ eyes.

Though it’s interesting: the fact that encumbered finishes even exist at all in our NASCAR vocabulary does almost feel like a step toward possibly stripping finishes in the future. I mean, disallowing a win in the eyes of the playoff hunt is already a fairly tall order, and if this weren’t the eighth race of the season, Logano and co. would probably be appealing the heck out of it if he remained winless just before the playoffs.

NASCAR’s top brass said last year that it hadn’t seen the kind of infraction yet that season that justified an encumbered finish. Now it has, and we’ve seen what comes of it.

Not pretty either way.

Rutt Row!!!!!! Guess NASCAR is sick of Fords already….seems it time to help their beloved Toyota’s get back on top! Brian likes their mucho pesos…..

Interesting how one manufacturer is handled vs. the other. If it was deliberate, then take away the damn win, he will get another. The viewpoint most fans have is NASCARS favoritism and their inconsistent consistency depending on who they like or don’t like. NASCAR has brought this perception on themselves and until EVERY TEAM is treated the same, fans will have that perception. And Fords are not one of Brian’s fave’s.

Rather expected that the first failed winner would be a Ford. I would bet my house that it will never ever be Johnson.

DoninAjax, isn’t it sad we think this way, but damn it..you know it is true, just know it!

And all the fluck around garbage with Toyota’s last year with their larger infractions and the like! Brian said he was getting pissed off, but he did not have the balls then. No way would he do that to a race sponsor and a big donor to Daytona Rising! See, I should have to think that way, but Brian does not give a logical person many options to the contrary. Yuppers, I am convinced the man hates Fords.

Beloved toyotas? Hardly. Nascar best buddies have always been GM cars and in particular, “Mr. Hendrick’s” team. There’s where the wink wink nudge nudge has gone over the years.

Beloved because Brain likes the $$$$$ Toys brings to his playhouse. Beloved because NASCAR toned down the HP because the TOYS engines were blowing up all the time, more so than any other team and they were tanking badly. Now they ride like Xfinity cars and that suits Jesus Joe just swell. Beloved because last year Marty and the Girls at Gibbs had violations on a weekly basis and not even a noticeable slap on the wrist. Team Penske does it with driver Logano and you would think they committed bloody murder. Rick and Brian is a no brainer…..that’s been going forever. A Bromance of control and dollars if there every was one…..NASCAR DOUBLE STANDARDS AND HYPOCRISY!

KB,
In order to be totally fair every car should either take every car back to R&D Center and tear apart or not take any cars back to R&D unless there may be a very obvious and legit reason to do so. This would have to be found during at track post race inspection. If nothing found there to warrant further investigation then so be it, the car/truck is legal.
If NASCAR wanted to still detain cars/trucks to the R&D center that is fine but anything found under that super detailed scrutiny would be used for improving the at track inspection processes to detect the perceived infraction and not actually affect the teams directly. In my opinion, how could something so small that is not detectable without ripping the car apart and measuring to that degree any true advantage. Besides if others figure it out competition back in play and becomes fairer again.
Keep the rules in place for the encumbered finish as it should still be a deterrent for flagrant offenses and manipulation but keep it at the track and in real time where it belongs. Heck have a separate team on hand to only deal with post race inspection to reduce issues of fatigue and such from playing a role. NASCAR can afford it until the networks come looking for a refund.

All sounds valid. I have no doubt cars on the track have their little this and that….that’s fine. Some get caught, some don’t. Some rules just make you want say “what, really are you kidding me”. The whole thing is over regulated, and often times boarding on absurd. Would love to see EVERY car on the track, every week get the same treatment and unbiased and truth in results. The perception of NASCAR favorites or not so favorites would not exist anymore.

Not a rules violation, but Ricky Rudd tookthe Checkered Flag @ Sonoma ’91 and then Nascar awarded the win to Davey Allison, so would this not serve as precedent, or the fact it was “during” the race different in some eyes? If they can do that, they should be able to do this. STRIP THE WIN, period.

Probably says more about the inconsistency of Nascar over the years. They gave Rudd a black flag and 5 second penalty because he tapped Allison during the race. These days, they would congratulate Rudd for being so aggressive and give him the win and a big pat on the back. Nobody has been dinged for moving another car that I can recall in the last 20 years or so.