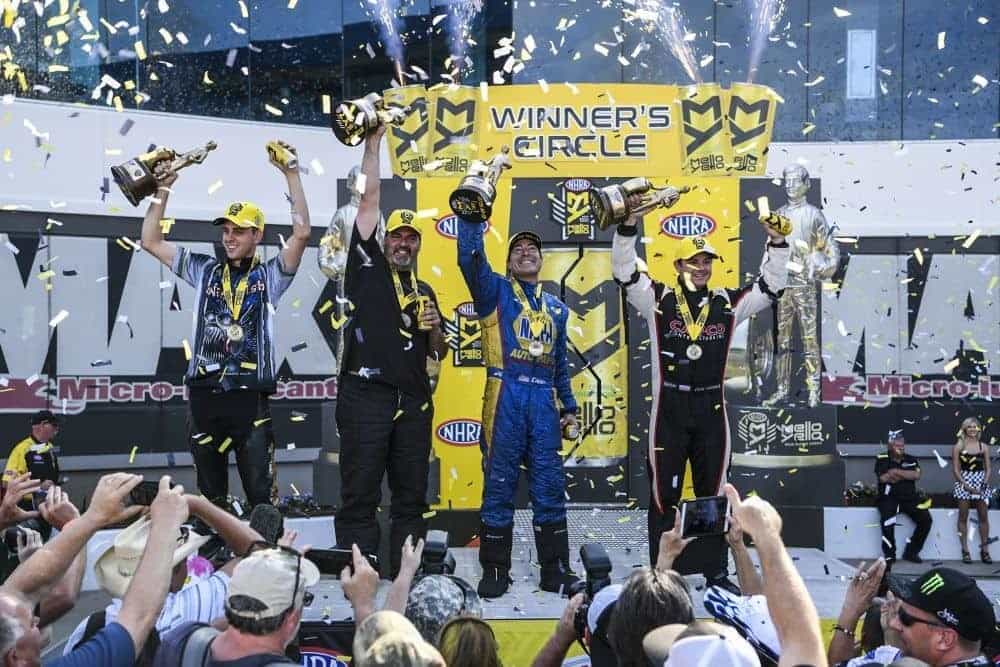 The J&A Services NHRA Pro Mod division joined the other professional classes of the sport and made their four-wide debut last weekend, and it was a rousing success. To be completely honest, the Pro Mods did better on their first try than some of the other classes. No confusion on any of the starts, everyone staged correctly and left correctly. No one crashed. No one even oiled down the track.

To be fair, the other classes also did well with avoiding the oil downs, and the only incident the entire weekend was contact with the wall by Courtney Force in Funny Car. There were, however, a number of flubs on the starting line that cost a few of the top qualifiers in eliminations.

There was one conversation with a colleague, however, that leaves me a bit confused. I commented to him about how I thought the addition of the Pro Mods to the four-wide class roster was a good thing. He launched into a commentary about how dangerous he thought the Pro Mods were, about how over-powered the cars are and how they are going way too fast and someone is going to get hurt.

Yup, they’re fast, and they can be a handful if you lack the experience, and sometimes even if you do have it. This equipment is probably going way faster than those who designed it ever thought about and it will probably continue to go even faster unless it’s choked down by the rules. Of course, we’ve seen some pretty scary crashes but mostly we’ve been lucky.

I don’t dispute any of those points. What I find confusing is how does this issue differ from anything else in racing? These points were brought to my attention while Nitro cars were getting ready to do their thing. They aren’t incredibly over-powered, or difficult to handle, or going astoundingly fast and just getting ever faster though, are they? Well, actually, they are.

Nitro cars are essentially bombs with vehicles strapped to them and sometimes they do exactly what bombs are supposed to do and blow up. Ask Ron Capps, who one week earlier had an engine explode crossing the finish line. Capps drives a Funny Car and the engine sits in front of him so he had a face full of fire in the cockpit. We won’t even go into the Nitro Harley riders who are sitting astride those bombs.

Pro Mods have gotten airborne. So have Top Fuel cars. Looking at you, Larry Dixon. He did it not once but twice and certainly no one is disputing his experience.  NASCAR cars also get airborne and Indy cars have as well. This is the month of May, the month of Indy. Indianapolis Motor Speedway has had a vicious temper at times toward the drivers brave enough to take her on.

It’s racing. No one makes drivers get in and risk their lives. They just do it for whatever their own reasons might be. As for the Pro Mods, I saw enthusiastic fans embracing the addition of this class to the four-wide slate. I see enthusiastic fans for this class, period. For many, it’s the most relatable class out there, featuring machines that still look like the cars they are based on, unlike Nitro cars, and it’s got variety on the track, unlike Pro Stock, a spec series that is over-regulated in the eyes of many fans.

One other point on debriefing the Four-Wide Nationals. It was a good weekend for the little guys. In the Mello Yello Series, only one winner, Ron Capps, is part of a multicar megateam, Don Schumacher Racing.

LE Tonglet, Pro Stock Motorcycle winner, has joined forces with Jerry Savoie for this season, and did the seemingly impossible and beat the Harley-Davidson riders at Charlotte. When’s the last time someone not named Hines won that race?

Chris McGaha is a solo act in the Pro Stock ranks. No Gray, no KB, no Elite. Just McGaha and a couple of guys building cars and engines and that little team outran all the rest.

Steve Torrence took the honors in Top Fuel. Also a solo effort, something Torrence is quite proud of. He understands the odds because he was told point blank he couldn’t do this. He did it anyway.

“Don Schumacher and I sat down [in 2011] and he told me ‘You can’t come out here and do this on your own and be competitive with these multicar teams’ and I’ll be honest, it pissed me off,” said Torrence after Sunday’s win. “I’m here to tell him you can, and we have and we’re going to continue to do so.”

Sunday was a good day for the little guys.

Enjoy the underdog winners from the Four-Wide Nationals. Plus it’s just fun to watch them go four-wide.