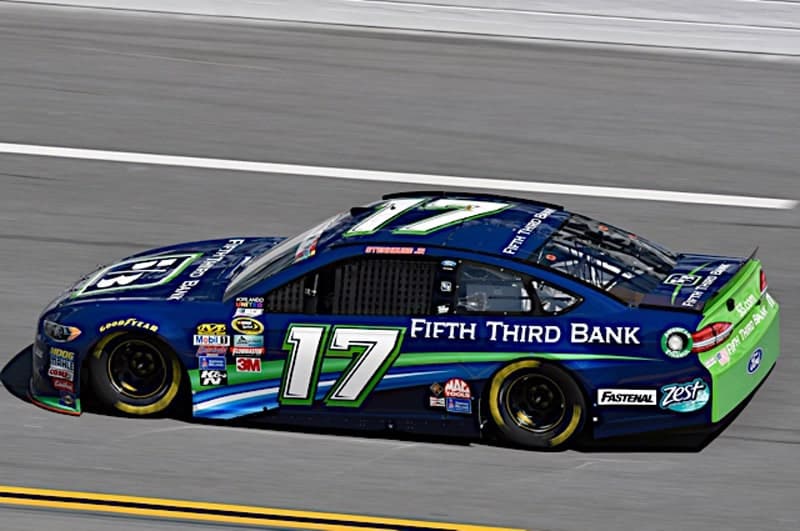 Beginning from the pole of the Geico 500 at Talladega Superspeedway, Ricky Stenhouse Jr. led the opening 13 laps before getting shuffled out of line. With 29 laps to go, he got into the rear of Ryan Blaney, sending the No. 21 car around.

But then he charged to the front.

On a green-white-checkered finish in overtime, Stenhouse restarted in second position, alongside Kyle Busch, who led a race-high 48 laps. A shove from seven-time Cup Series champion Jimmie Johnson edged the No. 17 car next to the No. 18 machine coming to the white flag.

Stenhouse cleared Busch coming out of Turn 2 and blocked for the remaining lap, earning his first career victory in his 158th career start, becoming the 11th driver to record their first victory at Talladega.

“This is for all the guys at the shop,” Stenhouse said in Victory Lane. “We’ve been terrible for a long time. This year, every race we’re getting better and better. We knew that Talladega was a good race track for us– it’s been a good one in the past.

Stenhouse’s triumph snapped a 101-race winless streak for Roush Fenway Racing, dating back to 2014. It’s also the first time in his career that he has two consecutive top five and three consecutive top 10 finishes in the Cup Series.

Jamie McMurray battered his way up to the runner-up position on the final lap, beating out Busch by .004 of a second.

“When they have too big of a run, you can’t do anything about it,” Busch said of being passed on the final lap. “Stenhouse got a really good run and a good push, and he got by us. Then it was all about retaliation and trying to get back on him and I just never had enough help from behind.”

Aric Almirola picked up his second top-five finish of the season on a restrictor plate race, finishing fourth and Kasey Kahne rounded out the top five.

With 20 laps to go the hard racing came to a crashing halt when AJ Allmendinger got into the rear of Chase Elliott battling for second. The No. 24 car spun in front of the field, collecting 17 cars, leading to a 27-minute red flag.

Allmendinger, who spent much of the afternoon in the back felt that he was loose, before the incident occurred, while barely bumping Elliott.

“Just battling for the lead. The [Nos.] 18 and 24 weere kind of leading the two packs and the [No.] 4 car was just on me,” Allmendinger said. “Once I got to Chase, I got loose, I barely tapped him and then I tried to get off him, but by that time it was too late.”

Keselowski, Kevin Harvick, Joey Logano and Trevor Bayne were all involved after leading laps earlier in the event.

After the battering the front end took when he hit Blaney I’ll be surprised if the car passes post race inspection.

Kyle looks lost during an interview when he can’t blame the car or tires or an idiot driver and moron spotter for his problem. Maybe the car and tires aren’t so bad after all. It just might be the driver. Sam has some baby consoling to do this week. She didn’t look too happy after the race knowing what was ahead for her.

Oops! Another Ford win. Brian’s in deep with Mr. H and Toyota. What’s he going to say to them this week?

KYLE BOOOSCH, seems to be getting close to a meltdown of epic proportions, damn lunatic! In my Lucy van Pelt type professional opinion!! 5 CENTS PLEASE! HEHEHEEHEHEHEEHEEEE!!!!!!