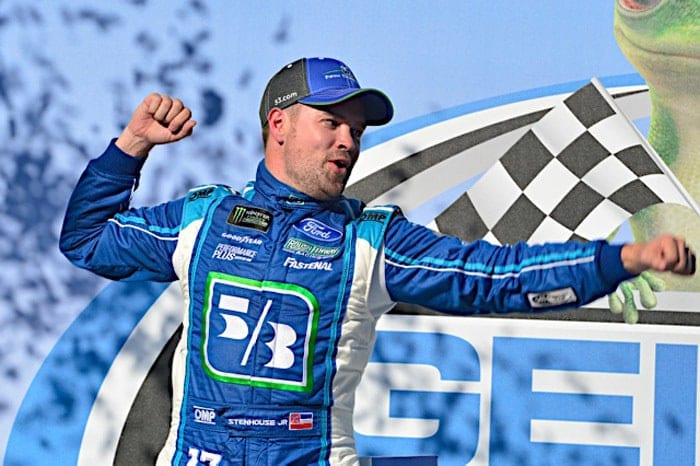 Jamie McMurray. He’s been known throughout his career as a guy who has a knack for winning the big races and excels on restrictor plate tracks. A Daytona 500 win in 2010 and a July victory at the World Center of Racing in 2007, plus two Talladega Superspeedway wins in 2009 and 2013, a Brickyard 400 and the Monster Energy All-Star Race are each slapped onto his resume. Add a Rolex 24 at Daytona triumph and you have yourself a pretty solid racing resume.

McMurray came home in second place in his No. 1 Chip Ganassi Racing Chevrolet on Sunday afternoon, a mere 0.095 seconds behind the eventual race winner, Ricky Stenhouse Jr. He made a daring three-wide move coming off Turn 2 on the final lap, shooting through the middle of Kyle Busch and Jimmie Johnson. He wasn’t able to catch Stenhouse, but garnered his best finish of his season.

“It’s so circumstantial with who gets behind who and who doesn’t,” McMurray said. “I was really concerned with blocking the No. 41 [Kurt Busch] on my outside, the middle was by far the best lane for me all day long. It was really close. I thought the No. 17 was going to pull out a little further than he did […] this was a track that I just wanted to survive at so we can get to another track and race.”

McMurray, especially recently, has gotten a reputation of racing too aggressively, carelessly and too hard on restrictor plate tracks. Drivers, spotters, crew chiefs and fans have all weighed on on the No. 1’s racing.

These drivers are good. Really good.

There were multiple points throughout the event that it was clear they were fixing to wreck. There’s no way they don’t wreck here. And of course, they didn’t. Why? Well, because they’re the best.

I try to convey to my friends how hard it is to drive a NASCAR racecar, especially at Daytona and Talladega. You’re piloting a 3,500-pound stock car at upwards of 200 mph with cars to your inside and outside that are mere inches away from you and the slightest of mistakes will result in not only the end of your day, but end of multiple of your competitors. Oh, and you’re also facing the risk of injury and in some extreme cases, death, at every turn.

The fact that “The Big One” only happened once in the GEICO 500 is remarkable, and shouldn’t be glossed over. The XFINITY Series race the day before had multiple large crashes, mostly due to the inexperience of drivers involved as well as urgency to gain stage points. There was that same urgency on Sunday, except not as many wrecks. The car control, mental fortitude, physical strength and confidence in not only themselves, but those around them, of these MENCS drivers is top notch.

Where… did the pole-sitter and the defending race winner end up?

Stenhouse “#ParkedIt” in Victory Lane for the first time in his Monster Energy NASCAR Cup Series career, which has spanned 158 races. Starting from the pole, he only led 14 laps of the 188-lap event at Talladega Superspeedway, but snapped a 101-race winless streak for Roush Fenway Racing, dating back to Carl Edwards‘ Sonoma Raceway victory in 2014.

Brad Keselowski led 31 laps on the afternoon and won stage one in his No. 2 Fitzgerald Glider Kits Team Penske Ford, but the winner’s circle wasn’t in the cards for the Rochester Hills, Mich. native. He was involved in “The Big One” on Lap 169, but sustained minimal damage. His pit crew was able to repair the car enough to keep up in the draft and somehow, someway, they ended up with a solid top 10 result, as they crossed the finish line in ninth place.

On Lap 169. That’s when the “Big One” occurred. It involved a whopping 18 cars. As the top cars in the field ran single-file, AJ Allmendinger‘s No. 47 Chevrolet tapped Chase Elliott‘s No. 24 Chevrolet in the wrong place at the wrong time, which started a chain reaction wreck that is so often seen at Talladega.

Elliott’s car went airborne before coming back down onto it’s four wheels, and Allmendinger’s car slid on it’s side before doing a 180 and sliding on it’s roof before coming to a stop. Safety workers quickly attended to all drivers involved, Allmendinger, upside down included, and all drivers were able to escape the wreck without injury.

Why… did Ricky Stenhouse Jr. win?

Because he had the fastest car. Sitting on the pole is an accomplishment anywhere you go, but it’s ratcheted up a notch at Talladega Superspeedway. The driver’s job during qualifying isn’t too hard: hold the wheel straight and mash the gas. It’s the team and the classic “boys back at the shop” that really put that car on the pole.

During the race, the No. 17 was one of the consistently fast cars and could maneuver wherever he wanted to, whenever he wanted to. With two laps to go, he powered his Ford below Kyle Busch to take the lead and clear the No. 18. On the final lap, he moved from top to bottom, frantically blocking any runs that came to his bumper. He did everything he needed to do in order to wind up in victory lane for the first time, and it all played out perfectly for him.

“The culture at our shop is just different,” Stenhouse told reporters after qualifying on Saturday. “The guys want to work there. They want to show up to work and work harder. They’re seeing that working harder is making different results for us, so it’s been a blast for Trevor and myself to drive these race cars each week […] there are a lot of good people at Roush Fenway right now.”

How… did some of the smaller teams fare?

When you say the word “Talladega,” terms like crapshoot, anybody’s race, and wide open tend to dominate the conversation.

11 drivers have earned their first career wins at the 2.66-mile trip-oval, including Brad Keselowski in 2009 with James Finch.

David Ragan won Front Row Motorsports’ first race in 2013. Heck, it goes all the way to Richard Brickhouse in the first ever race at ‘Dega.

Roush Fenway Racing cannot be called a “smaller” team, but it is not a powerhouse anymore. That’s what makes Stenhouse Jr.’s victory that much sweeter. But how did some of the other underdogs do?

Those small, underfunded guys finished ahead of superstars in the sport with multi-million dollar teams. No matter how they did it, be it hanging in the back to avoid “The Big One” or racing their guts out to get up front, they should all get their due for solid afternoons.

Lordy, Lordy…what Superman, best ever, the man story will be written about Ricky this week…till next week. LOL

Nice to see a new winner. Congrats to Stenhouse. BTW, McMurray’s move on the last lap was as thrilling as it gets.

So how do both Keselowski and Menard finish 9th.
I one part of the list 2 car is ninth then in the how did the smaller teams do Menard is ninth. Who was actually where and how does this get past editing?

In the analysis of the big one they kept talking about how the 47 did not hit the 24 very hard, and how it was “just a light touch.” Even Chase Elliott said as much, but he’s just a sweet kid, who would make excuses for someone who hit him over the head with a baseball bat. Reality is that the 47 punted the 24 really HARD going into the turn, and then DID NOT BACK OFF and give him a chance to recover, but hit him two more times. He claims that the 4 was pushing him, but the 4 was three feet or more clear of him. The 47 was at best a thug and at worst an assassin.

Don’t you think that’s a little… extreme? The big one happens here, and very often it’s at the front of the field. The drivers understand this, why don’t you?

Question 7: What did Danica say when Ricky handed her the trophy in the car as he drove them home?

Answer: “One of these days I’ll be polishing this trophy.”

Muttering “This is going in the basement.”