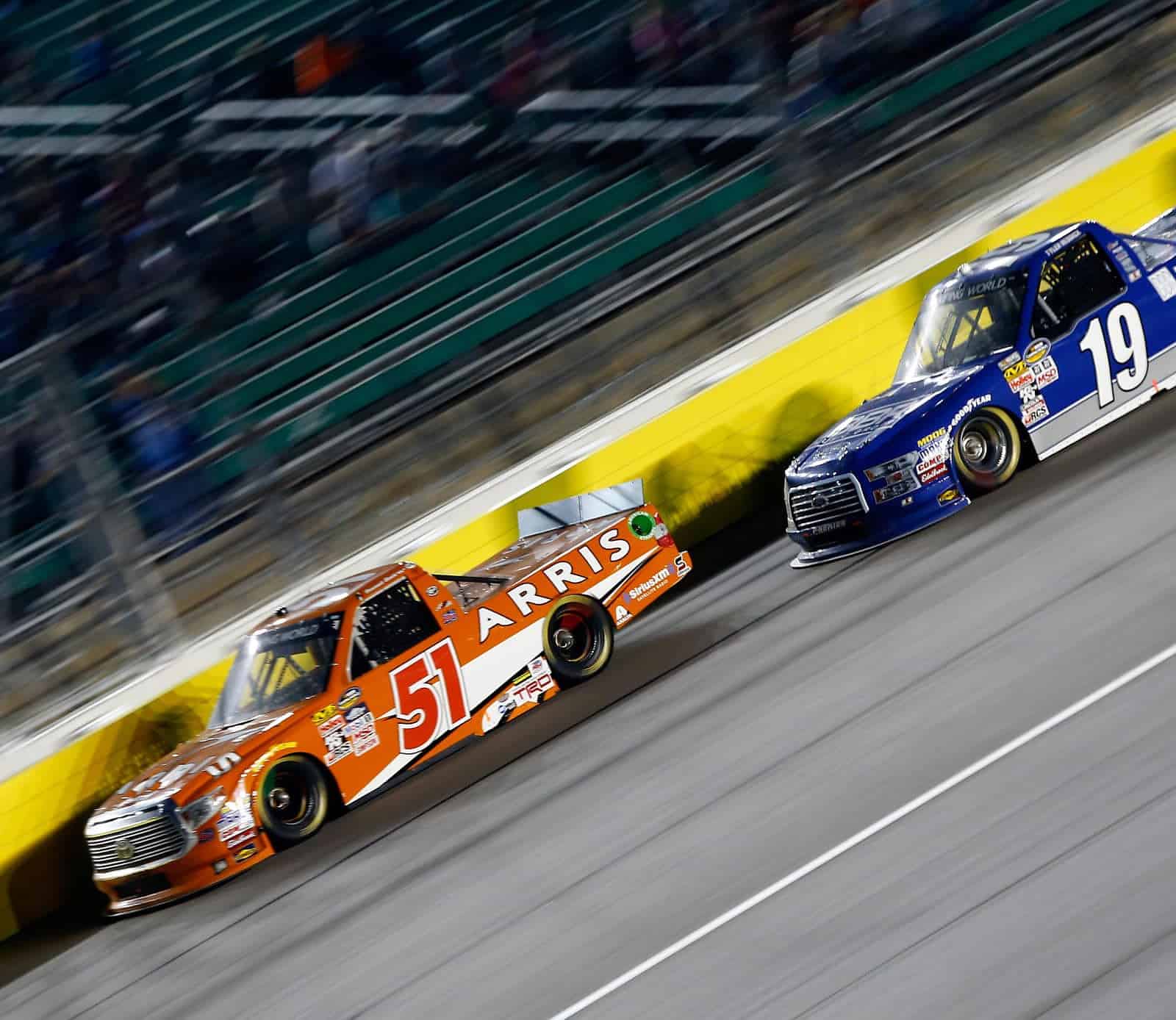 On Tuesday, NASCAR released the entry list for Friday night’s Toyota Tundra 250 at Kansas Speedway.  For the Camping World Truck Series’ fourth race of the year, 31 trucks are currently entered.  As a result, no one will fail to qualify.

A couple of strong teams are not entered this week, most notably GMS Racing’s All-Star No. 23 Chevrolet.  Chase Elliott won last time out in Martinsville in that truck.  There are a number of driver moves of note here.  Kyle Busch is stepping back into his No. 51 Toyota for his second race of the year.  Sponsorship will be provided by Cessna.

Young’s Motorsports is once again operating the No. 02 this weekend, so Tyler Young returns to the fray in place of Austin Hill.  The Young team runs Chevrolets as opposed to Hill’s Fords.

MDM Motorsports has their fourth different driver in as many races.  Travis Miller, who competed for the team in the ARCA race at Salem last month, will replace Ty Dillon in the No. 99 Chevrolet.  This will be Miller’s fifth career start.  He had four starts for Hillman Racing back in 2012 with a best finish of 24th at Kentucky.

Spencer Boyd will make his Camping World Truck Series debut this weekend in the No. 12 Chevrolet for Rick Ware Racing.  Boyd will run roughly half the season in the GruntStyle.com-sponsored Chevrolet, but failed to qualify at Daytona.  He replaces Jordan Anderson in the No. 12.  Anderson is still trying to get his own truck prepped to return to the track after a crash back at Atlanta.

Jennifer Jo Cobb returns to her own No. 10 Chevrolet for her home race with local sponsorship from Mark One Electric.  Cobb recently announced that she’s trying to have a baby with her husband Eddie Troconis.  As a result, it is currently unclear how much longer Cobb will race this season.  Cobb has stated that she will step out of the truck once she conceives, but will be back racing once she gives birth.

Austin Wayne Self will drive the No. 45 Chevrolet for Niece Motorsports this weekend, replacing TJ Bell.  He’s bringing sponsorship with him from Precision Air Technology.  In addition, Todd Peck returns to the DJ Copp-owned No. 83, replacing Donnie Levister.

Only 31 teams and Kyle is in there to steal their lunch money. Thanks Brian for getting that one right. I think Saturday I will be in my backyard drinking a beer watching the grass grow.