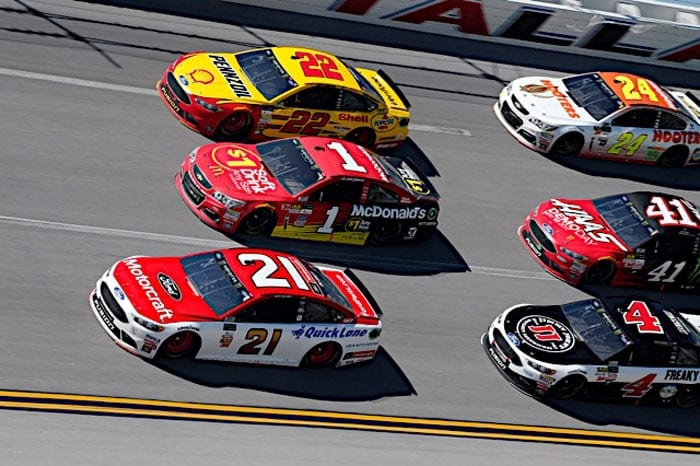 The 2017 Monster Energy NASCAR Cup Series season has seen it’s fair share of winners and losers thus far. 10 races into the 36-race season, there have been a handful of surprises as well as disappointments.

One of those surprises found victory lane this past weekend at Talladega Superspeedway in Ricky Stenhouse Jr. as well as Roush Fenway Racing. But there are also a handful of past champions and big name drivers who have yet to find the winner’s circle.

Although not even one-third of the season is a relatively small sample size, there is a fair amount of information that can be gathered from these 10 races, Whether it be from the new lower downforce package, the new 2018 Toyota Camry switch as well as manufacturer changes and organizations downsizing, there are lots of happenings in the world of NASCAR.

A: Chip Ganassi Racing has really impressed me so far. If the regular season ended today, both of their drivers would qualify for the playoffs. In fact, one could argue that Kyle Larson and the No. 42 team have been the best in the entire Cup series this season.

Larson’s win at Fontana has been the highlight for him and the No. 42 bunch, but four second-place finishes aren’t too shabby either. He had three in a row after the season-opening Daytona 500 (which he was leading on the final lap before running out of fuel) and has had a driver rating of over 100 in seven of the 10 races (150 is a perfect rating) and had a rating of 144.3 at Auto Club Speedway.

Clint Bowyer has eclipsed his 2016 total for top fives and top 10’s in less than 33 percent of 2017’s races. We knew that last season with HScott Motorsports was bad, but I don’t know if we expected Bowyer to be contending for wins wth Stewart-Haas Racing this quickly,

The Emporia, Kan. native has two top five finishes to go along with four top 10s. His second-place result at Bristol was his best in almost two calendar years. He’ll find victory lane sooner rather than later, especially with teammates like Kevin Harvick and Kurt Busch to lean on. Plus, his owner, who he’s filling the seat for, knows a thing or two about winning races in SHR equipment.

And last but not least, I’ve been impressed by Jimmie Johnson. When it seemed like the whole world was questioning if the No. 48 team had lost a step and if their “championship hangover” was real, they shut everyone up by winning back-to-back races at Texas and Bristol, respectively. He already has four top-10 finishes and has been running at the finish of every race besides the Daytona 500. He even brought the Lowe’s Chevrolet home in eighth-place at Talladega last week, a venue that has given him fits recently, finishing outside the top 20 three of his last six trips to the 2.66-mile tri-oval.

But with these impressive starts to the season come some lackluster performances. First and foremost, the sport’s most popular driver, Dale Earnhardt Jr., comes to mind. Junebug sits 25th in the MENCS points standings and only has one top five finish thus far. Coming off his abbreviated 2016 season due to a concussion, a slow start was expected from the Annapolis, NC native. But the No. 88 hasn’t been competing for wins, and never was a factor at Talladega, his best track. With the announcement of his retirement at season’s end, Earnhardt Jr. can have fun and enjoy his final season in NASCAR competition. But winning would help him achieve that goal considerably easier.

Joe Gibbs Racing has been slow out of the gates as an organization in 2017, but no driver has had tougher luck than Matt Kenseth. The 2003 champion sits 19th in the points standings and has four top 10’s and two top fives, but has finished outside the top 20 six times and outside the top 35 three times. Most of that is due to back luck and being in the wrong place at the wrong time (Daytona, Phoenix and Fontana), but the No. 20 wouldn’t be in that unenviable place if it weren’t for the team not running well and being in the back of the pack. I’m sure JGR will turn it on and eventually qualify three, maybe four, drivers for the playoffs. But until then, there’s plenty reason to worry for Kenseth fans.

Richard Childress Racing has won a race, snapping their 127-race winless streak dating back to the end of the 2013 season. Ryan Newman has been solid and Paul Menard has been average. But Austin Dillon has been disappointing to say the least. The driver of the No. 3 came on at the end of last season and looked like a contender for wins almost every week, but 2017 has been a different story. He only has garnered one top-five finish and sits in 23rd-place in the standings. His brother, Ty, who is running for Germain Racing, regarded as a “lesser” team than RCR, is ahead of him in 22nd. Dillon had 13 top-ten finishes last season, and he is on pace for four right now.

Q: Do you think Daytona and Talladega are tougher to win at than your normal cookie-cutter 1.5 mile venue? – Elijah B., Rochester, New York

A: This is a tough question that I go back and forth with almost every single year. But I think I’ve come to a point where I realize it depends on a multitude of different factors that help a race team go week in and week out.

The answer to your question, in my opinion, is no. Restrictor plate tracks have been called “the great equalizer” for years upon years. That’s why you see guys like David Ragan, Brad Keselowski (before he became the BK we know today) and Trevor Bayne winning races

at Daytona and Talladega, but not on the intermediate venues. Underfunded teams are able to have a legitimate shot at winning, rather than their minute chance that they have at Atlanta, Las Vegas, Texas, Charlotte, etc.

Restrictor plate tracks are more about driver than car. Don’t get me wrong: if your car is fast, it doesn’t hurt. We saw that evident this past weekend with Stenhouse Jr., as the No. 17 wound up in victory lane in part due to having the fastest car. When Earnhardt Jr. has won his countless races at ‘Dega and Daytona, it’s been because his car was fast and he’s a master at the tracks.

But there’s a reason Hendrick Motorsports, Joe Gibbs Racing, Stewart-Haas Racing and Team Penske have been outrunning Front Row Motorsports, TriStar Motorsports, Premium Motorsports, etc. Heck, some of you reading this right now might not have heard of those smaller budget teams. That reason is simple and it rears it’s ugly head in every aspect of life: money.

Restrictor plate tracks are extremely tough to win on, just like any other track in NASCAR. But it’s more about putting yourself in the right position at the right time. At other tracks, it’s less about luck and more about the driver and team as a whole. So, Elijah, I hope that answers your question.

Have another question for next week’s NASCAR Mailbox? Tweet at me (@DaveyCenter) and Joseph Wolkin (@JosephNASCAR) and we’ll be sure to answer them next week!

Shouldn’t past tense be used with Ralph 3? When was the last time he was a “MASTER” at any track?