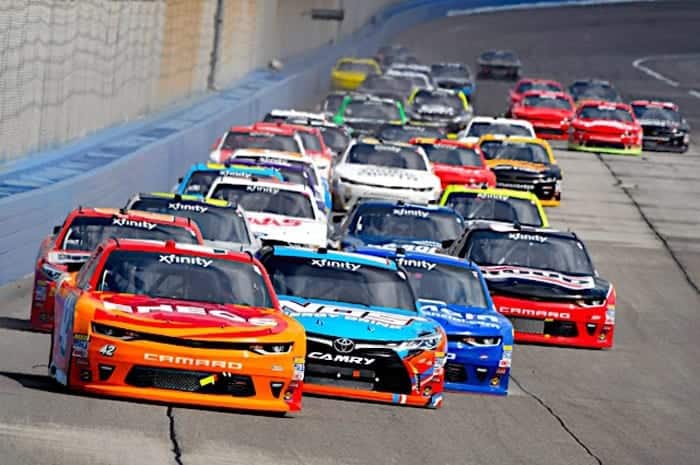 I have just one question this week: how the heck is the 2017 NASCAR season almost a third over already?  2017 is flying by… maybe a little too fast! Complain though I might, I never want race season to end.

10 races in, there’s a lot to think about.  Some of it’s serious, a lot of it isn’t. This week, here’s a few of the NASCAR season storylines that have been running through my mind as of late.

I like that NASCAR has been a bit more transparent with the rulebook this year, and that some of the penalties are instant, applied on race weekend. But enforcing the rules has become a damned-if-you-do, damned-if-you-don’t situation.  This week, Aric Almirola’s No. 43 car failed post-race laser inspection and will be penalized.  If the infraction is similar to one Brad Keselowski and his team had earlier this year, the consequences will likely be severe. Among other things, there would be a 35-point hit for Almirola and team owner Richard Petty along with a three-race suspension for crew chief Drew Blickensderfer.

That’s something fans should be happy about; they essentially know the penalty beforehand. It could be reduced depending on the scope of the infraction, but generally, you know what’s coming for a LIS failure.  You know what’s coming for lug nut violations.  This consistency is what fans have been asking for.  But there’s a vocal faction who have been outspoken on social media about the penalty being too stiff because the failure was reportedly for the car being out of tolerance by less than the thickness of a credit card.

I don’t get that.  Teams are already generally given a fraction of leeway post-race to allow for heat cycles, wear and tear, etc.  If a team is outside it, they’re outside it.  Period.  Next time, they probably won’t be.

Yes, way out of tolerance might give a bigger advantage than slightly out, but both are breaking the rules.  Why shouldn’t they be penalized? (Of course, I think teams should be stripped of their finishing spot if they’re not legal post-race.  Maybe I’m just a hard-ass).

The conclusion from all that is it seems like people want consistency… until they don’t. Having it both ways isn’t really an option.

I’ll admit I didn’t love the idea of the All-Star Fan Vote when it began.  The All-Star event had always been about winning, and the Fan Vote drivers haven’t done that. (For the record, I’m still not happy teams don’t get to participate in the All-Star Race if they have a different driver from whomever got their win.  They’re a huge part of why the former driver of the car won and they deserve the recognition. It’s not about whether Clint Bowyer or Daniel Suarez are deserving, because their teams certainly are.)

But the vote’s grown on me over time, and it’s been fun seeing teams and drivers reaching out to fans asking for their support.  Whether or not anyone new makes the race on the vote, it’s a way for fans to participate. It can often lead to direct communication with the drivers themselves.

Teams have, of course, taken to social media to make their case to any undecided fans.  Leavine Family Racing and Go FAS Racing had an absolutely hilarious Twitter battle that started Sunday. This fun, outspoken social media back-and-forth is something we need more of in the sport.

.@Mc_Driver is coming at you like a spider monkey pic.twitter.com/vgQhimUj14

As NASCAR’s popularity remains a main focus, there are two ways of looking at a driver’s impact on the sport.  You can’t look at a career without numbers; the starts, the wins, the near-wins, the bad days, too. But numbers alone don’t tell the whole story, maybe not even the most important part.

Those chapters come from the impact a driver has on the fans (see: a retiring Dale Earnhardt Jr.).  Did he connect?  Did he mean something to them personally?  Those matter, too.  No, popularity won’t put a driver in the NASCAR Hall of Fame if he doesn’t have the numbers. But a plaque in the Hall can’t convey the emotions a driver evoked or the fond memories every fan has.

And to a driver’s fans, the numbers are icing on the cake.  They might choose a driver because of his record, but most stick with him because of who he is. Fans are the ones who’ll tell you why their guy should have more wins (even if he has dozens), why he’s underrated, and why he’s the best.

That’s a driver’s real legacy: the feeling he evokes with the fans.  Is he universally liked? Wildly popular?  The villain everyone loves to hate?  Maybe that doesn’t matter.  Drivers fuel fans’ passion.  In many cases, they feel like old friends, even to people who’ve never met them.

What they leave with their fans are what makes it so hard to choose another driver to pull for when they move on… and that first favorite never leaves a race fan.  A driver’s true legacy isn’t just written in laps completed or trophies collected, precisely what makes this sport so wonderful.

It appears that NASCAR’s Fanatics Superstore souvenir format may already be at the end of its era.  A lot of fans liked the more personal nature of individual souvenir haulers, getting to know the people who ran them over the years and sometimes enjoying driver appearances. They were a part of the sport for many years, and they’ll be back in some incarnation in a few weeks (though apparently still operated by Fanatics).

What I liked about the huge Fanatics tent was that it had a section devoted to the small teams and drivers.  Many of those teams didn’t have haulers before the tent came along.  I hope the fans of those drivers won’t be forgotten and overlooked with the new format.  Fans should be able to proudly display their loyalties, and the tent gave them that opportunity.

To close, I have just a funny, completely random story.  I help out mornings on a friend’s farm.  This fact is key, because I happened to be at the farm when I checked my Twitter feed yesterday morning.  Casey Mears posted this video link, so I played it while waiting on the real horsepower to finish breakfast.

I watched dad do this a handful of times… this was my first time! Apparently it works on… https://t.co/lM6wHnigQX

The video is pretty ridiculous in itself. For example, why, exactly does one need to hypnotize chickens?  Who actually figured this out in the first place, and what were they doing?  So many questions.

But I was on a farm.  A farm with chickens.  So guess how my friend and I spent too much time (and by too much, I mean any) flipping over chickens to test it out. (For the record, it works.  Mears isn’t a chicken whisperer, I think). I’m pretty sure this kind of thing is why hashtags start.  Because I #blameMears.

Yes, it’s totally silly.  But it’s an example of how social media has brought fans closer than ever to the sport, its drivers and other people involved.  As frustrating as it can be that there aren’t really any surprises any more, well, there are still surprises.  They’re just not what you expected.

Agree with you on the penalties. A line has to be drawn somewhere. If you cross it you get the penalty.

I’ve never liked the fan vote. If they limited it to drivers that were somewhat justified in being in the all star race (past champion, or winner from previous year, or made the chase in the previous year, etc.) that would be OK but when it’s just a popularity vote or who can lobby via the media, then it cheapens the entire event (and it’s already pretty cheap).

The NHL learned about fan votes. They should have learned for NA$CAR’s.

A lot of Fords being found “illegal” according to Brian’s rules. I guess your goose is cooked if you don’t have a friend on the Chevrolet approved appeal panel. Not surprising for me based on Brian’s past. You can learn a lot from the past if you look.