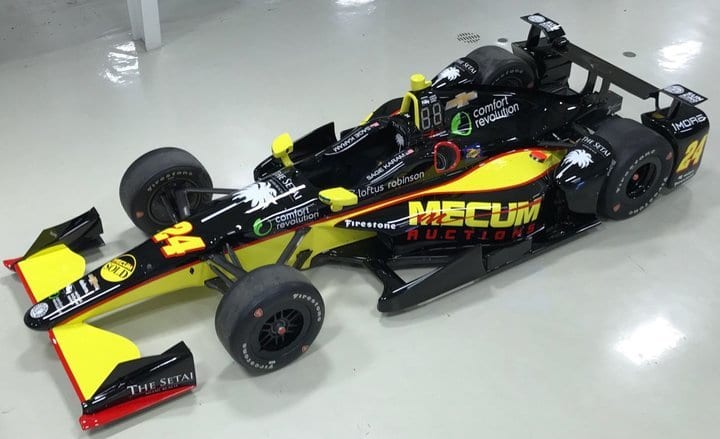 On Wednesday, Dreyer & Reinbold Racing announced that they are rekindling their partnership with Kingdom Racing for the Indianapolis 500.  IMSA WeatherTech SportsCar Championship regular Sage Karam will return to the team to pilot the Chevrolet-powered No. 24.  Replacing Gas Monkey Energy as primary sponsor will be Mecum Auctions, a well-known automobile auction that airs events intermittently on NBCSN.  Comfort Revolution returns an an associate sponsor.

“It was an easy decision to work with Kingdom Racing again this year,” Reinbold said in a press release.  “They are a positive group to work with at the Speedway and we greatly appreciate their continued support in the 2017 Indy 500.

For Karam, this will be his fourth start in the Indianapolis 500.  His best finish is a ninth in 2014 for Dreyer & Reinbold in his Verizon IndyCar Series debut.  However, he’s had terrible luck recently.  He has crashed and finished 32nd the last two years at Indianapolis.  Last year, Karam crashed after charging into the top five from the middle of row 8.

Mecum Auctions is not a new sponsor to the team.  Back in 2012, Mecum Auctions served as the primary sponsor of the team’s No. 22 for driver Oriol Servia.  Servia finished a strong fifth at Belle Isle Park, but had issues in Mid-Ohio that year and finished 25th.

While Dreyer & Reinbold Racing currently only makes one-off appearances at Indianapolis these days, the team has roots stretching back over 90 years at Indianapolis.  Previously, the team fielded full-time efforts in the Verizon IndyCar Series for drivers such as Justin Wilson, Buddy Rice, Robbie Buhl, Sarah Fisher and more.  The team has one victory in the series, the 2000 Delphi Indy 200 at the now-defunct Walt Disney World Speedway.