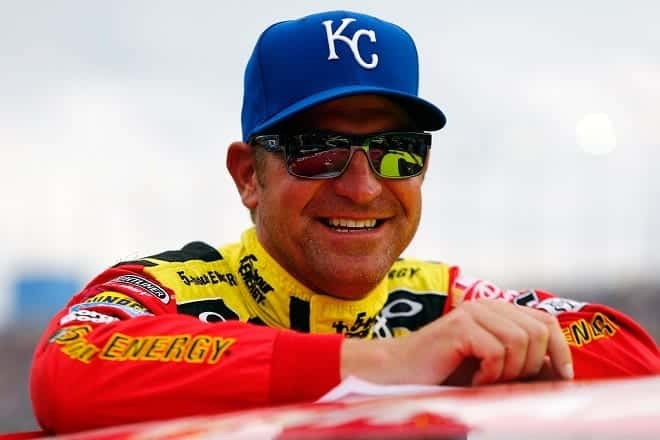 They call him Kansas Clint because his hometown of Emporia, Kansas, is about 100 miles south of the speedway. The 37-year-old is known as one of NASCAR’s good old boys in an era filled with more Snapchat filters than farming equipment.

Despite gelling with the Kansas land in the most natural of ways, the 1.5-mile track hasn’t been his best place to earn a paycheck. It didn’t start out too bad, as Bowyer led 43 laps and finished ninth in his first Kansas start in 2006. He backed that up with a second-place result in ’07.

Since that day, the last 10 years haven’t gone well. With only five laps out front since that ’06 race, Bowyer has only three top 10s with the last being a top five in 2013. Heck, it’s been more than two years since he’s finished every lap at this place.

But don’t fear, Stewart-Haas Racing and the 2017 season are here. Bowyer has come back with a vengeance in the Cup Series this season, earning two top fives and four top 10s, already more than all of 2016.

Despite having a 159-race winless drought on his shoulders coming into Saturday night, Bowyer may be in the best condition to win races in nearly a half-decade. And though he said he would choose Martinsville Speedway as the place to score his first win for SHR, I don’t think he would mind a hometown victory.

Roush Fenway Racing ended the pain last weekend at Talladega Superspeedway when Ricky Stenhouse Jr. earned his first Monster Energy NASCAR Cup Series win from pole in what seemed like a perfect day for the sport.

But how long will that medication last for RFR?

With the plate racing done until July, we return to the 1.5-milers this Saturday for the Go Bowling 400 at Kansas, a nice track in Stenhouse’s past.

Starting with the No. 17 driver, his Kansas career kicked off with a third-place qualifying effort and 26 laps led in 2013. Backing that up with a front-row start that fall, the finishes, however, haven’t been as kind. In eight starts, Stenhouse scored a best finish of 13th twice, including this event last year.

Jumping to his third-year teammate Trevor Bayne, the No. 6 has had a slower start to 2017, with only one top-10 finish in the 10 races. But consistency has been his strong suit, having seven top-15 finishes putting him 16th in driver points.

That pace may have to save the Tennessee native from his track history at Kansas, as he only has one top 20 in five starts.

Above all, RFR is the happiest team in the sport as of this week. An upbeat team is a fast team, right?

Will Kansas Add Another New Winner in 2017?

Who would’ve thought Richard Childress Racing and Roush Fenway Racing would win before Joe Gibbs Racing this year? An irregular prediction if you consider the winless streaks of both RCR and RFR and the dominance of JGR heading into Daytona Speedweeks.

However, that is where we are after 10 races. Ryan Newman and Stenhouse have given us a couple surprise Victory Lane selfies while six others had their well-earned time in the spotlight. But there are many expected winners and series champions who have yet to crack the code in 2017.

Heading into race No. 11, how many winners will we get until the playoffs, and will we see our ninth different winner on Saturday?

You wouldn’t have to go far to find someone who thinks Kevin Harvick, Chase Elliott and Kyle Busch can easily win as soon as Kansas. Being contenders up front as a weekly basis (Harvick and Busch have led the most laps in 2017), the number of winners can increase to 11.

There are others who are a bit tougher to classify. Jamie McMurray is having a career year in terms of points, but just earned his first top five of the year last week at Talladega. Bowyer has two top fives, but is sandwiched between Jimmie Johnson and Busch in points. He, Denny Hamlin, Ryan Blaney, Matt Kenseth and Erik Jones have all shown their respective bursts of speed at times. That’s enough to keep them in the conversation.

So, for Kansas, if JGR is going to be making a comeback this year, you can expect it to be Kansas, a track at which it and JGR affiliate Martin Truex Jr. led 244 of 267 laps last year. As for everyone else after the next 16 races, it’s a safe bet we will get 13-15 winners, just enough to keep a points-earner into the playoffs come September.

Who to Watch in Truck Series Return Race?

And finally, Kansas Speedway is psyched to present to you… the true start of the Camping World Truck Series season!

After one race a month from February to April, we now hit the real start of the calendar, when the truckers race more than once every four weeks.

For Friday’s Toyota Tundra 250, we will find the answers to few questions I’ve been pondering since last time out at Martinsville Speedway.

First, will Christopher Bell continue his hot start? The year became more busy for the 22-year-old, who has signed with Joe Gibbs Racing to drive for seven XFINITY Series races. The news comes after two of Bell’s best career races in Trucks, leading 99 laps to victory at Atlanta Motor Speedway before leading another 96 at Martinsville toward a third-place finish.

Through only three races, Bell has already surpassed his laps led form all of 2016. Still, this doesn’t have him in the point lead, as that goes to Johnny Sauter, whose stage wins and back-to-back podiums put him in the top spot.

It’s just in time, too, as he enters a track he came darn close to winning at one year ago. That was before a desperate move by Ben Rhodes in the race’s final turn turned both him and Sauter into the outside wall.

That 16th-place finish was Sauter’s only 1.5-mile track finished outside the top 10, proving the GMS Racing No. 21 is among the best on this style of track.

That finish leads to my final question: will we have another first-time winner? When Sauter and Rhodes struck the outside wall last year, it opened the door for William Byron to score his first of a record-breaking seven victories in a rookie Truck campaign.

And there is not a shortage of drivers who could be next on that line. Rhodes would be a good place to start, as he had a guaranteed top-two result in store at Kansas last year on the last lap. In 2017, the 20-year-old earned a fourth place in the season’s only intermediate track at Atlanta.

The final possible first-timers are in the top 10 in points after three races. That will be rookie Chase Briscoe and Regan Smith, two drivers who are leaps and bounds separated in experience but have similar speed thus far this year.